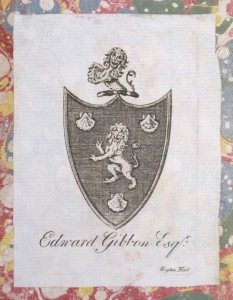 Thanks to three private collectors in the twentieth century, Cambridge libraries contain significant holdings of books by and from the library of Edward Gibbon, eighteenth-century historian, Member of Parliament and author of The history of the decline & fall of the Roman Empire (1776-1788). Trinity College’s magnificent Wren Library holds around 75 books from Gibbon’s own library (part of the 3000 volumes of Lord Rothschild’s collection, given between 1951 and 1969), including his large folio copy of Herodotus (Amsterdam, 1763, now RW.50.15), inside which are some 3300 words of notes in Gibbon’s own hand. King’s College received in 1946 the library of the economist John Maynard Keynes, on the history of European thought, including a number of volumes acquired at a 1934 auction of a portion of Gibbon’s library. And finally, the University Library received, in 1982, the extensive library of Maynard’s brother Geoffrey, who in 1940 published a catalogue of books known to have belonged to Gibbon, based on his and his brother’s acquisitions at the 1934 sale and on a number of handwritten catalogues of Gibbon’s books. A selection of books from Gibbon’s library in Keynes’ collection is shown at the head of this post. With such strong collections in Cambridge the University Library is pleased to announced the acquisition, this summer, of a previously unknown nineteenth-century catalogue of Gibbon’s books, described below. 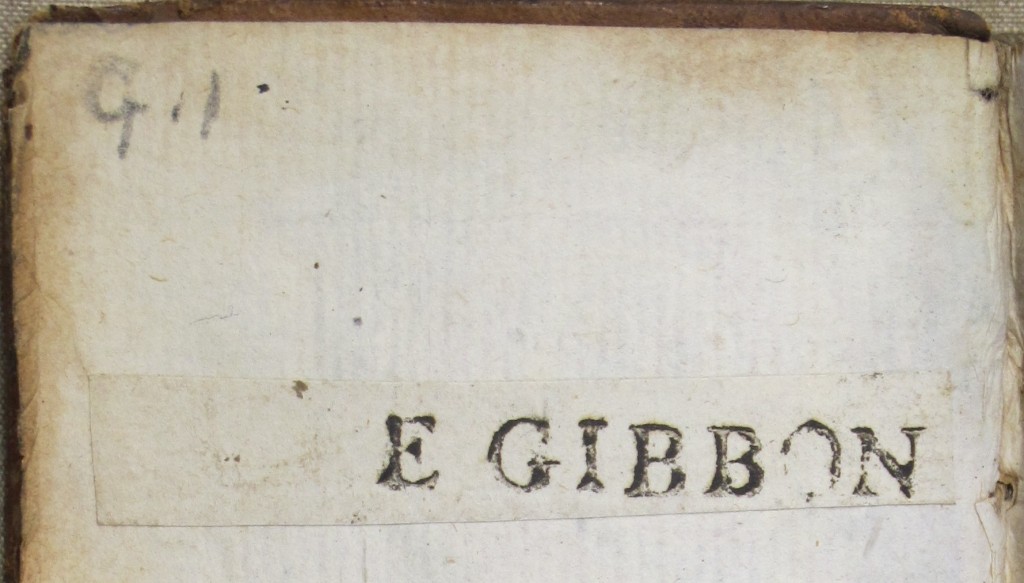 But first some background on the man himself. Born in Putney on 8 May 1737 and schooled at Kingston-upon-Thames and Westminster, Gibbon was later sent to Oxford, matriculating at Magdalen College in 1752 where, he later wrote in his autobiography, ‘My vanity was flattered by the velvet cap and silk gown which distinguish a gentleman commoner from a plebeian student’ (this and the following quotations are taken from Gibbon’s autobiography). Just fourteen ‘idle and unprofitable’ months were spent at Oxford before his father removed him after his controversial conversion to Catholicism. He was sent to Lausanne to be tutored, and did not enjoy the early days of his new life: ‘From a man I was again degraded to the dependence of a schoolboy … I received a small monthly allowance for my pocket-money … [and] no longer enjoyed the indispensable comfort of a servant. My condition seemed as destitute of hope as it was devoid of pleasure.’ However, five productive years were spent in Switzerland and it was a place to which he would later return. From 1758 until 1772 much time was spent at Buriton, his father’s country mansion in Hampshire, and it was there that he wrote his first major work, Essai sur l’étude de la littérature (London, 1761), later published in English (in 1764). A presentation copy of the French edition is among the books of Geoffrey Keynes. He returned to Lausanne in 1763 and in the following year visited Florence and Rome where, on 15 October 1764, the idea of writing his great work on the history of the decline and fall of the city came to him: ‘As I sat musing amidst the ruins of the Capitol, while the bare-footed friars were singing Vespers in the Temple of Jupiter, the idea of writing the decline and fall of the city first started to my mind.’ The writing of such a work required many books and Gibbon built up an impressive personal library of classical, religious and historical writers. Gibbon noted in his autobiography that ‘I have gradually formed a numerous and select library, the foundation of my works, and the best comfort of my life, both at home and abroad.’ 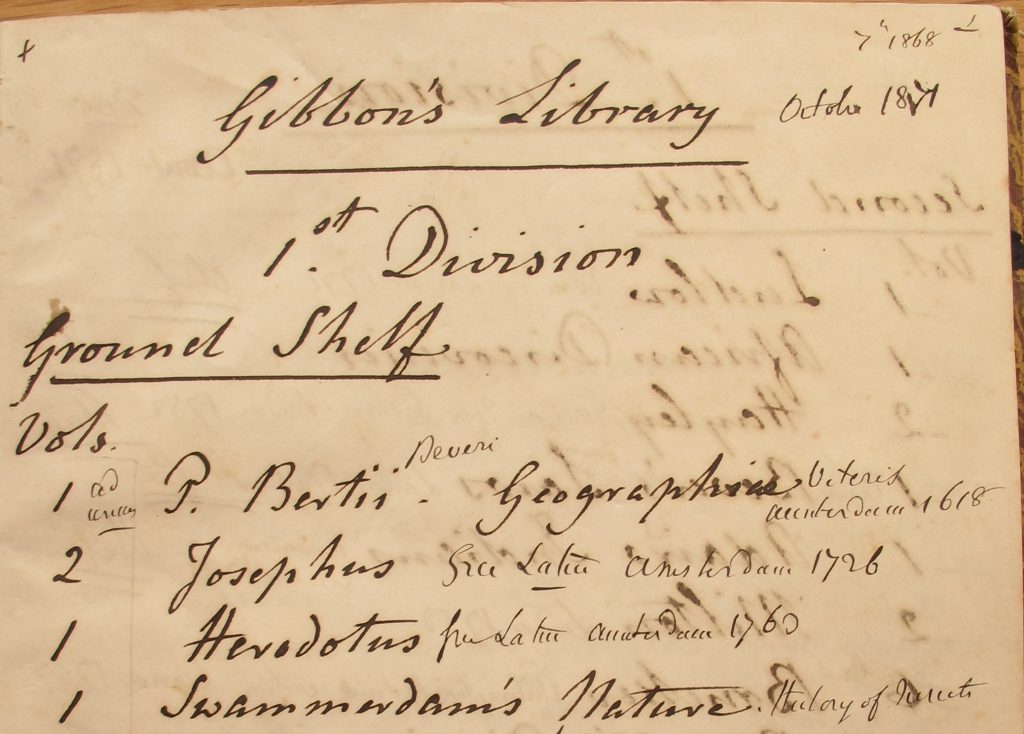 First page of the newly-acquired catalogue

His father died in 1770 and by 1772 Gibbon had left Buriton and taken up residence at Bentinck Street in London, a few minutes’ walk north of Oxford Street. A catalogue of Gibbon’s library here was made in 1777, listing about 2000 titles in 3300 volumes. Books continued to be added throughout the 1770s and 1780s, when Gibbon served as an MP (for Liskeard 1774-1780 and Lymington 1781-1784). But in 1783, Gibbon left London for Lausanne and took just 2000 volumes with him, leaving the remainder at his friend Lord Sheffield’s house in Downing Street. While he worked hard on the final two volumes of his Decline and fall books poured into the house, with £3000 being spent on books alone between 1785 and 1788. A card catalogue was constructed – the word ‘card’ being important here – using the blank backs of nearly 1700 printed playing cards, and this was kept up to date until 1789, occasionally in Gibbon’s own hand. Gibbon’s books were distinguished by the presence of a fine armorial bookplate or (though sometimes in addition to) a simple printed name-label. 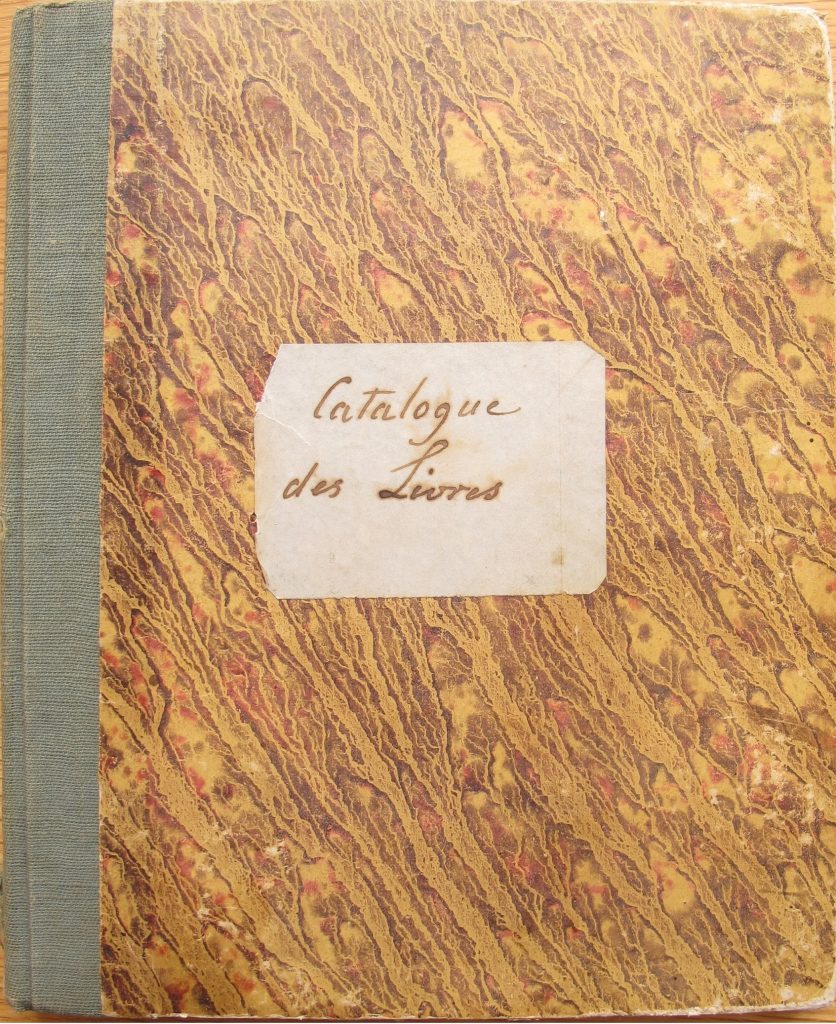 Front cover of the new catalogue

By now there were some 6000-7000 volumes at Lausanne, and in 1792 his friend Lord Sheffield became concerned at the ultimate fate of the library, which he feared would be spoiled at the hands of French revolutionaries or dispersed at Gibbon’s death. Sheffield proposed in a letter that the books be left to him and kept together as ‘The Gibbonian Collection’ at his country seat, Sheffield Place in Sussex. Gibbon thought this a ridiculous idea, and much preferred the idea that his books would be dispersed at his death: ‘I consider a public sale as the most laudable method of disposing of it … If indeed a true liberal public library existed in London, I might be tempted to enrich the catalogue and encourage the institution: but to bury my treasure in a country mansion under the key of a jealous master! I am not flattered by the Gibbonian collection, and shall own my presumptuous belief that six quarto volumes [his Decline and fall] may be sufficient for the preservation of that name.’ The following year, 1793, Sheffield’s wife died and Gibbon travelled to London to console his friend, never to see his beloved books again: Gibbon himself became ill, and died on 16 January 1794.

The University Library’s newly-acquired catalogue seems to have been made sixty or seventy years later, in the late 1860s or early 1870s and lists part of the Lausanne portion of Gibbon’s library, which changed hands several times after his death. Upon moving to Lausanne in 1783 Gibbon took with him 2000 of his 3300 volumes, the rest remaining in London with Lord Sheffield. At Gibbon’s death Sheffield – Gibbon’s executor – sold the Lausanne library to William Beckford (eccentric author of Vathek and collector of immense financial means), who lived at Fonthill Abbey in Wiltshire and noted that ‘I bought Gibbon’s library to have something to read when I passed through Lausanne. I shut myself up for six weeks from early in the morning until night, only now and then taking a ride. The people thought me mad. I read myself nearly blind.’ Beckford later gave the Lausanne library to his physician Dr Frederic Schöll, who sold part of it to one John Walter Halliday, keeping the remainder until 1832, when it was offered for sale in Lausanne. The Halliday portion was kept in a tower at the Château des Clées (about 40km NW of Lausanne) and in 1855 was put in the charge of the Rev. Charles Bedot, who took full possession upon Halliday’s death in 1873. It was evidently during Bedot’s custodianship that our catalogue was made; the main entries (a simple author/title list) appear to date from the 1860s, and were supplemented in 1871 with places and dates of publication. After the death death of Bedot’s son Maurice in 1927 most of the collection was sold to a book dealer who attempted to sell it en bloc, potentially to Magdalen College Oxford, who rejected the rather steep asking price of over £4000. The dispersal of this portion of Gibbon’s library finally came (more or less) to an end in 1934 when 1412 volumes were sold at Sotheby’s for a little over £1575. 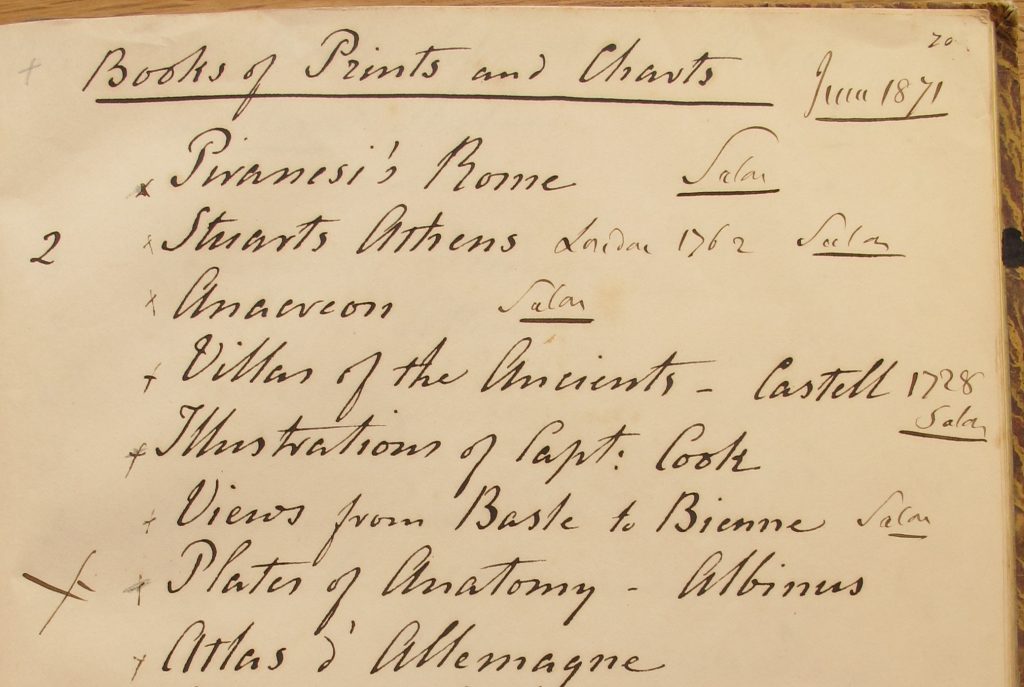 ‘Books of prints and charts’

Our new acquisition is yet to be studied in detail, but contains important hitherto unknown information about the contents of Gibbon’s library, including a number of titles not previously known to have belonged to Gibbon (i.e. missing from Gibbon’s own catalogues and those made by later owners of portions of his books), perhaps being late acquisitions made by Gibbon and not entered in his own catalogue (his card catalogue was not updated after 1789). It also gives occasional snippets of copy-specific information: his copy of Estienne’s Poetae Graeci (Paris, 1566), for example, is noted as having come from the library of the philosopher Spinoza. Furthermore the catalogue contains a list headed ‘Books of prints and charts’, which includes a copy of James Stuart’s ‘Antiquities of Athens’ (1762) not found in Keynes’ catalogue. As the image below shows, a number of books were left behind at the Château des Clées when Bedot eventually took custody of Halliday’s portion, some of which may turn out to be unrecorded in any of the other catalogues. This important new acquisition (which may be consulted in the Manuscripts Department with the shelfmark MS Add. 10192), along with the collections of Maynard and Geoffrey Keynes, and the Rothschild books at Trinity, make Cambridge an important centre for Gibbon studies and, over two centuries after his death, we are certain that it will be of interest to those studying his life and work. 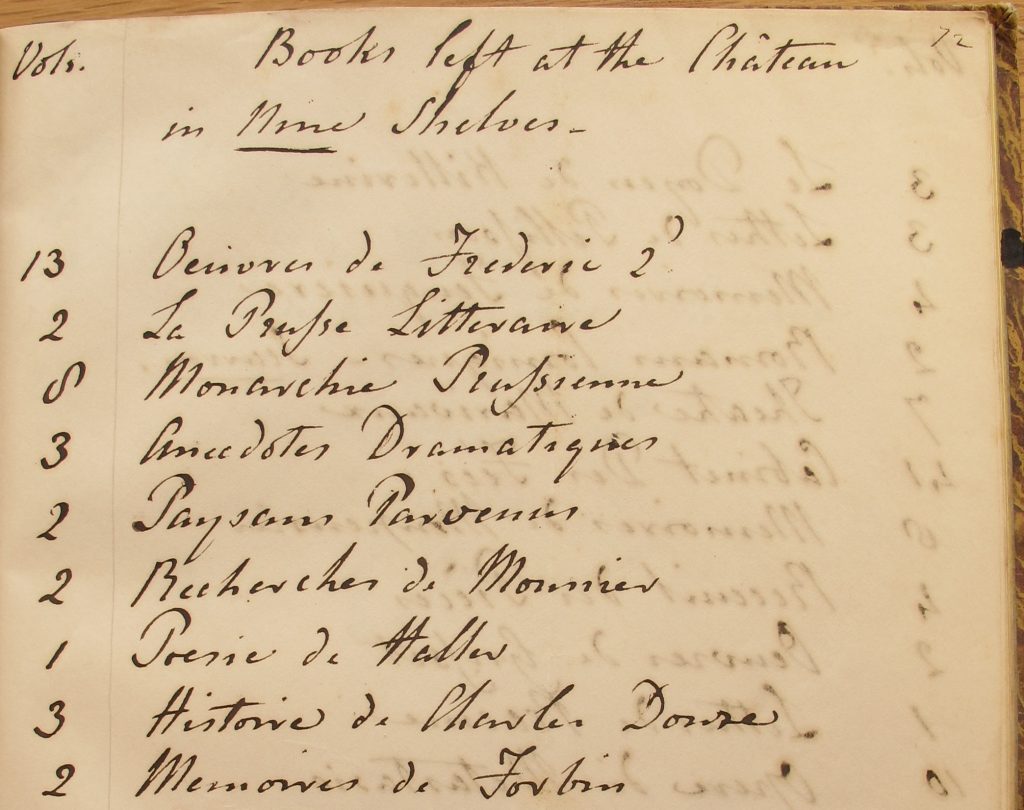 Books left at the Chateau