‘… superb photographs of very great interest’: an album of New Guinea views in the RCS collection 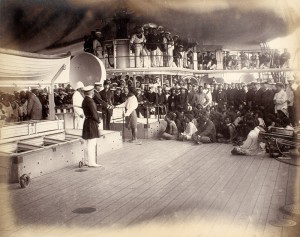 On a recent research trip to the UK I visited the Cambridge University Library in order to look through the photographic holdings relating to Papua New Guinea in the Royal Commonwealth Society collection. The album with accession number Y3084A, titled ‘Photographs of New Guinea’ (1884), proved an intriguing ‘find’. Letters that had been kept with the album in its archive box document the attempts made (in 1971) to track down the identity of the photographer as well as details of the subjects photographed in the absence of captions, with little success (in terms of the photographer’s identity, at least). The quote in the title of this blog post is taken from one of these letters, written by the librarian at University of Papua New Guinea at the time, Mr W. G. Buick – and the photographs are indeed superb. 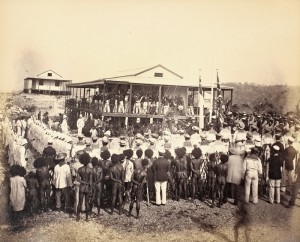 What is known about the photographs is that thirty-six of them were reproduced in a book commemorating the proclamation of southeast New Guinea as a British Protectorate, titled Narrative of the Expedition of the Australian Squadron to the South East Coast of New Guinea October to December 1884, that was published in 1885 by the New South Wales Government Printing Office in Sydney, Australia. A selection was also reproduced in Charles Lyne’s account of the 1884 proclamation expedition, New Guinea, but as drawings. Several of the subjects of the photographs in the album in the RCS collection can therefore be identified. 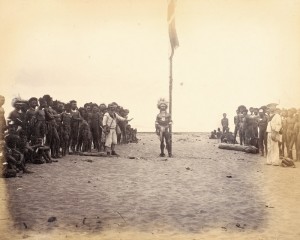 But what of the photographer? The thirty-nine prints are most likely by the professional photographer Augustine Dyer, who worked for the New South Wales Government Printing Office in 1884. It seems he travelled to southeast New Guinea as part of the official flag-hoisting expedition (Newton 1988, 58). Around a dozen ceremonies were performed in villages along the coast by Commodore Erskine of the H.M.S. Nelson, and it was Dyer’s task to document these (he also took general views of the villages, landscape and people). Why Dyer was not recorded as the photographer is unclear, though given that in the past it was considered of more importance what photographs such as these were of than who took them, it is not surprising that this information was not noted. The album was an official gift from the New South Wales Government, which was responsible for the administration of New Guinea, to the Royal Colonial Institute in London. In this instance, then, the celebration of Britain’s claim on this region of the world and the Australian colony’s ability to administer it was of importance; and what better way to signify this than to compile and present an album in which the newly claimed territory is ‘packaged’ in a series of superb photographs.

Antje Lübcke is a PhD candidate in the School of Culture, History and Language at the Australian National University, Canberra. Her doctoral research is on the photographic representation of British New Guinea in the late nineteenth century and, in particular, the New Guinea photographs by the LMS missionary Reverend William G. Lawes and John W. Lindt.