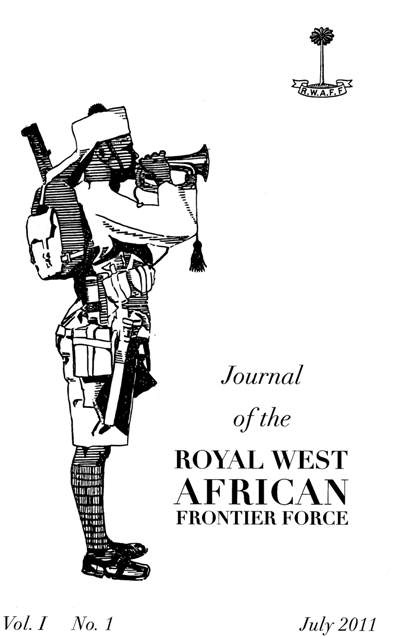 The Journal of the Royal West African Frontier Force (RWAFF) was launched in July 2011, filling a gap in the research literature.

Published twice a year (v.1, no. 2 came out in January 2012), the journal may interest military historians and historians of West Africa, as well as family historians with links to the RWAFF.

Editor, Keith Steward, has ensured that the often short articles are well referenced, and illustrated by photographs and detailed maps, where appropriate.

In Issue 2 articles include the Cairo to Kano Aeroplane Flight, November 1st 1925 (the story behind the first plane to land in Nigeria), notes on Major Seth Anthony MBE (1915–2008), the first African soldier to attain King’s commissioned rank in the Royal West African Frontier Force, and part 2 of Brian O’Gorman’s ‘Gone for Bush’—his recollections of daily life in the RWAFF.  A rather longer article, ‘White City, Major-General Orde Wingate’s Special Chindit Force, Burma 1944′ documents the Chindits’ mission in Burma, and is included because the Chindits, who were trained to infiltrate behind Japanese lines, included many West African servicemen.