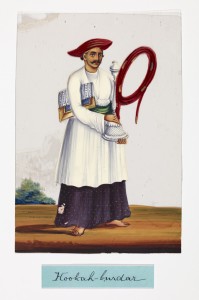 Mica paintings were produced in standard sets for the colonial tourist market, with many being sold to employees of the East India Company from the late eighteenth/early nineteenth century – hence the collective term ‘Company paintings’.  Mica paintings imitated paintings on glass which were popular in Europe at the time and were also used in India by artists for preserving tracings of their family paintings and to decorate glass for temple lanterns.

The Library’s set comprises thirty-six miniature portraits from Trichinopoly, the British name for Tiruchirappalli, and is dated 1869.  It is not known who purchased the set, but they reached the Royal Empire Society in October 1935 inserted into a small bound volume, the front cover of which was embossed ‘Scrap book’.  Each colour portrait is painted on a very thin sheet of mica, referred to as ‘talc’ in a pencil annotation on a preliminary page in the scrapbook. 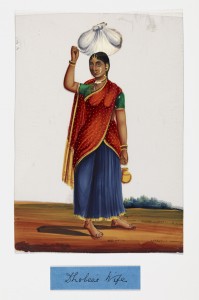 It is almost certain that our micas were created as souvenirs – the postcards of their day – as they depict thirty-six Indians in brightly coloured clothes, sometimes bearing an object or clothing which distinguished their role in Indian society at the time.  Examples are the Hookah-burdar carrying his master’s hooka (pipe for smoking) or the Dhobee’s wife carrying a bundle of washing above her head.

Incredibly, for objects of such an ephemeral nature, the micas reached the Library still brilliantly coloured and fairly intact, but they had become too fragile to handle. Library Conservator Emma Nichols takes up their story, describing the project to conserve and rehouse them.

Mica is a transparent mineral composed of complex mixtures of potassium silicates commonly found in igneous and metamorphic rocks. Its transparency results from heat and pressure build up between layers of rock during formation. Mica consists of many interlocking platelets, resulting in a structure which can easily be split into thin sheets.

Mica has a very smooth glossy glasslike surface and, unlike paper and parchment, is hydrophobic; meaning changes in humidity do not make it expand or contract. It readily delaminates and any flexion or pressure creates a high risk of it cracking and breaking apart.

Our thirty six mica paintings were originally displayed in an album, held in place on each page at the corners by double diagonal slits in the paper. Each painting is a portrait composed from a thin sheet of mica painted on one side with thickly applied watercolour.

Why do they need treatment?

Displaying the mica in an album was of mixed success for their longevity.

Positively, being in a binding meant that the mica had avoided being directly handled, which due to their fragile nature would have most likely resulted in them being damaged beyond repair.

On the other hand, the way the paintings were restrained on the pages, by slits in the paper, had caused delamination and losses, particularly to the corners of the paintings.

These paper slits had become damaged over time and in some cases had cut right through the corners of the paintings, breaking off bits of mica. 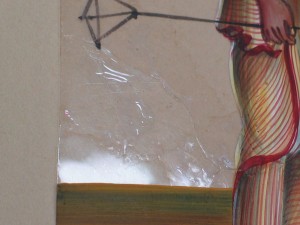 Detail of delamination of mica caused by flexion of album pages

Additionally, the flexion of turning the pages of the album had put the rigid, brittle mica under considerable strain and had caused some severe cracking.

As mentioned earlier, mica is hydrophobic and so long-term adhesion with water-based paints, such as the water colours used for our paintings, is problematic.

Changes in humidity had caused the paint to expand and contract, movement which further detached it from the mica substrate. It was therefore unsurprising that eleven of our paintings had suffered paint cracking and losses.

Detail of paint loss and cracking

As mica was a new material to our department it was imperative to gain as much information as we could from other conservators and establishments with experience. Prior to any conservation treatment being carried out, we consulted conservation articles written by The Wellcome Trust, Pitt Rivers Museum and the Victoria & Albert Museum.

We visited the V & A museum, where they have a substantial collection of mica paintings, to discuss and investigate their successful approach to treatment and rehousing.

The most pressing concern for our mica paintings was to consolidate the paint before any more was lost. The mica sheets were removed from the pages of the album and vulnerable areas of paint were consolidated with a transparent acrylic adhesive applied by a brush. A painting with a completely detached corner was repaired with the same acrylic adhesive on the recto and a bridge of Melinex, an archival polyester film, on the verso. As conservators, our priority is to preserve and stabilise what remains of original material. We believe filling in the gaps purely for aesthetic purposes is unethical and as such we did not re-touch any of the areas of lost paint.

Once paint consolidation was complete we moved onto the conundrum of rehousing. The original plan had been to encapsulate the mica in Melinex sleeves and put them back into the album. This idea was not successful as it did not prevent the original problem, of the mica flexing as the pages turned. We decided that mounting the mica into rigid window mounts would offer maximum support whilst enabling the mica to be stored flat and handled safely without compromising their visual impact.

As none of the mica could be directly adhered into the mounts, a way of gently restraining them in place needed to be devised. A piece of archival card with a window cut to the exact dimensions of each individual mica would provide a recess for the paintings to lie in and provide some resistance to them moving freely. As none of the mica are square or have perfectly straight sides, each required an individually cut window.

The card windows were adhered to the back board of the mount using Lascaux 498 HV, an acrylic adhesive that can be activated using heat. This heat activation was desirable as it would minimise the risk of the mount warping, as would be the case with a water-based adhesive. 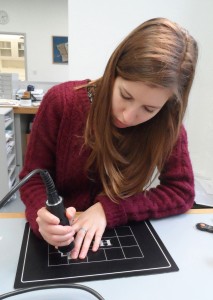 The Lascaux was applied to a Melinex carrier through a silk screen with a squeegee and the card was then carefully laid onto the adhesive to dry.

The dried card, complete with adhesive film, was peeled from the Melinex and windows were hand cut into the card to fit each individual piece of mica. An iron was used to adhere the card recess to the mount.

Though the addition of archival card windows provided a recess for the paintings to sit in, this was not enough to hold them securely. For added stability, transparent strips were made to restrain the corners of the paintings. These differed from the original paper slits as the paintings would not be fed through them, only held down gently from above.

The transparent strips were made from polyethylene with Japanese tissue ultrasonically welded to the ends. Polyethylene was chosen over melinex as it is softer and less reflective.

The transparent polyethylene would go over the mica and the tissue ends would enable adhesion of the strip to the card window.

Three different lengths of these strips were made so that dependent on damage, areas of vulnerability and visual aesthetic, the optimum positioning would be achieved.

The mica were paired with their individual window mounts and placed carefully into the recess. 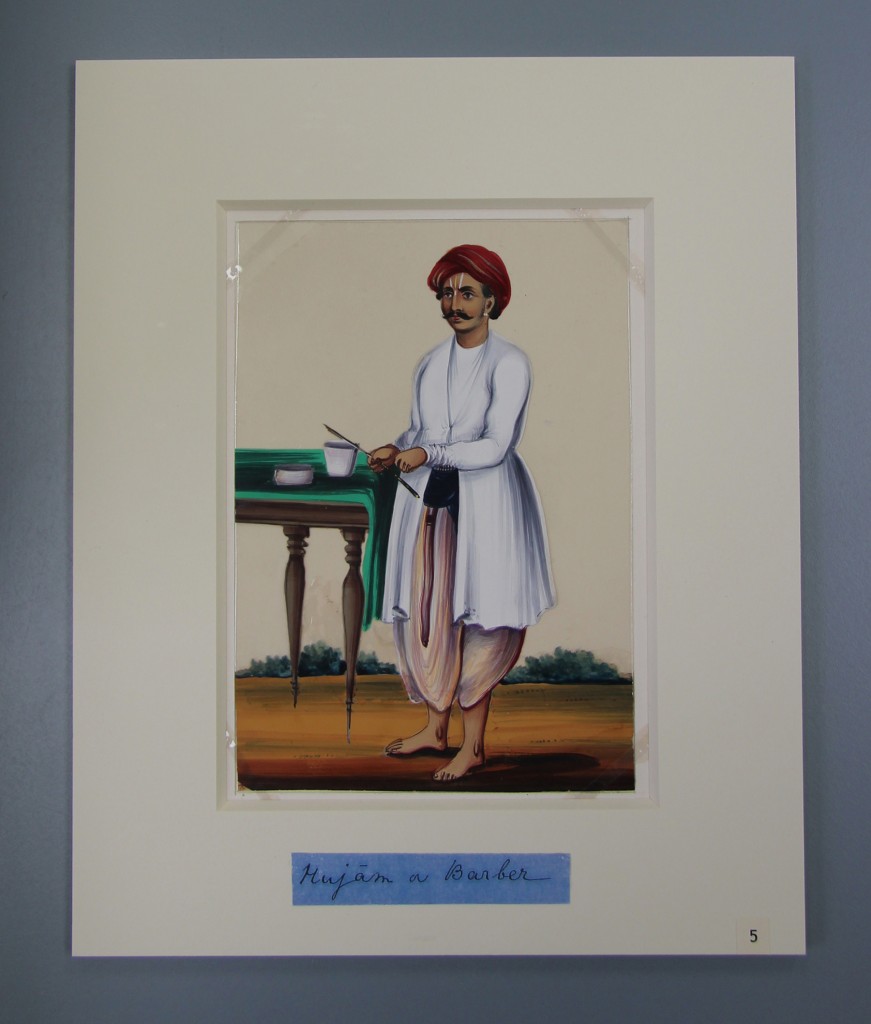 A finished mica in mount

Restraining strips were chosen and then adhered in place with wheat starch paste. Once the mica were in place and the restraining strips dry, the window mount was sealed closed along two sides with Japanese paper.

Copies of the original handwritten labels from the album were adhered to the window mounts so that each mica still had its description.

Once the mica were all individually housed, a solution needed to be designed for storing the collection as a whole. 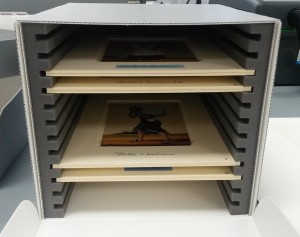 The mica in position in the box

The requirement was to keep the mica flat and stable, prevent them from touching each other, and encourage handlers to treat them delicately and hold them horizontally. A drop front box was designed with horizontal grooves into which each mount would slide in and out and be held horizontally.

The idea was that in order to remove the mica from the box, the handler must first gently ease the mount along the horizontal grooves using both hands until it is free from the box. Having gone through this motion the handler is already in the mind-set to handle the mount with care. 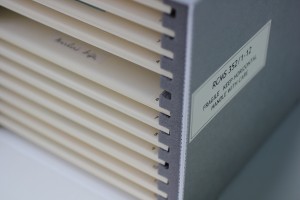 Detail of mounts in plastazote grooves

The grooves have the added bonus of holding the mounts equal distances from one another which allows for airflow and prevents them from knocking into each other.

A new design of box was produced in house and then made by Conservation by Design. A detailed collaboration with a company that engineers plastazote, a firm, dense, archival foam, produced plastazote walls with grooves. Once the grooved plastazote and boxes arrived they were assembled using mock ups of the mica mounts to ensure everything was in the correct place. 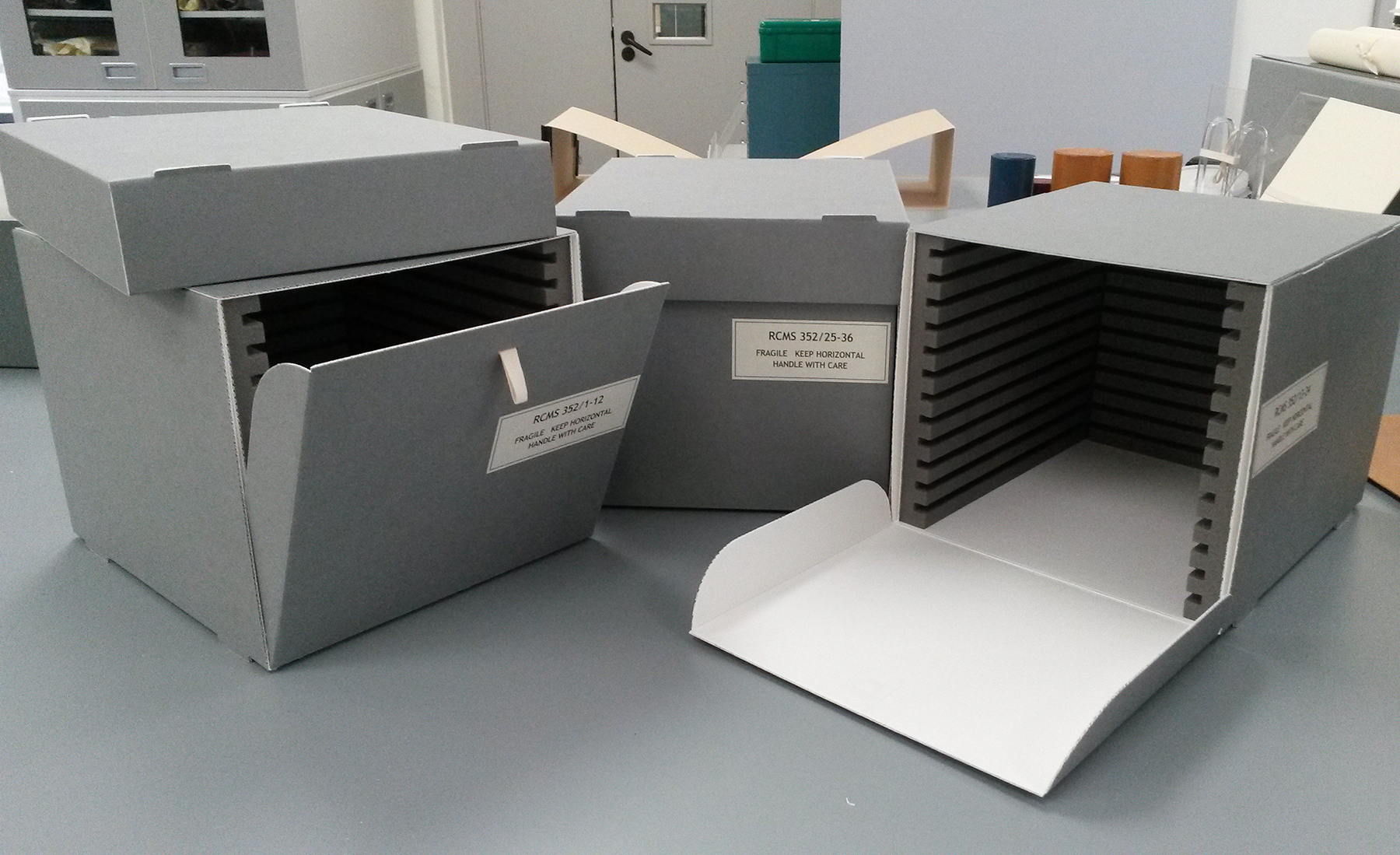 Three boxes were ordered which were to hold twelve paintings each. The mica were carefully positioned in their new home and placed within the secure stacks in the Royal Commonwealth Society store at the Cambridge University Library. The original album had its paper pages repaired and was housed in a custom made box.

The Library is keen for researchers to study the micas but the originals may only be viewed by appointment with a curator or conservator.

The Company Paintings were conserved at Cambridge University Library by Senior Conservator Deborah Farndell. Preservation and re-housing was carried out by Conservator Emma Nichols. The collection was described by Royal Commonwealth Society Librarian Rachel Rowe.