‘Plots upon the stage’: Restoration drama in the University Library 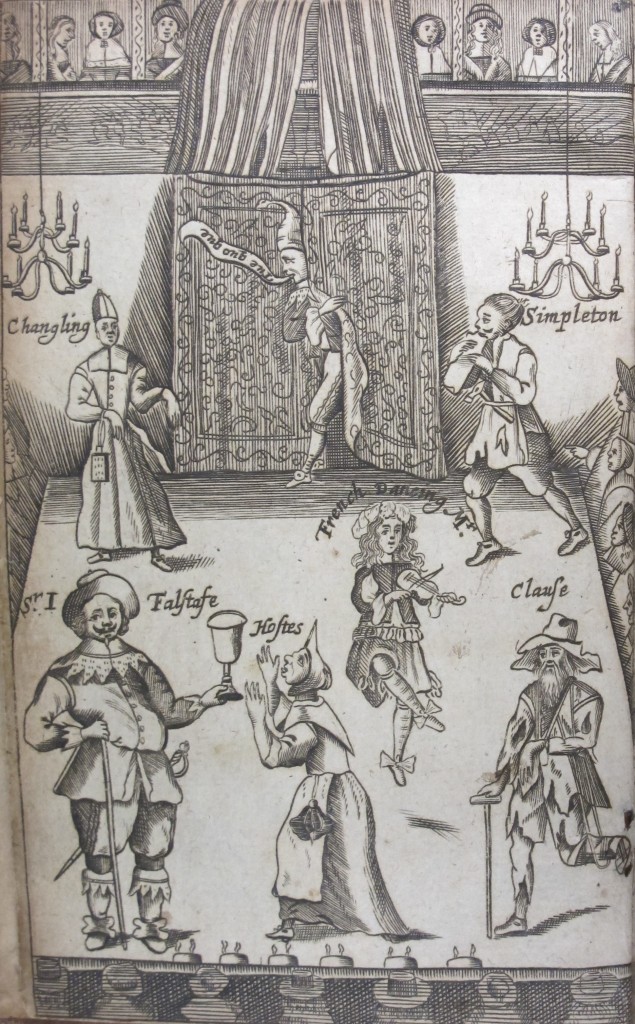 Interior of a seventeenth-century theatre, from Kirkman’s ‘The Wits’ of 1672 (Brett-Smith.1029)

In the 1980s the Library acquired two significant collections of seventeenth-century literature: the Brett-Smith collection of Restoration drama and the Verney collection of political and literary pamphlets. To coincide with the birthday (on 9 August) of the poet and playwright John Dryden, highlights from both are now on display in the Entrance Hall cases, until 5 September.

The dramatic tradition in England reached a high point during the Elizabethan and Jacobean periods but, with Puritan opposition to all things theatrical (and concern that public gatherings could be used to further the Royalist cause) theatres were ordered to close in 1642. This did not kill them off overnight; several theatres remained open into 1643, ordinances against stage plays were still being issued in 1648 and performances continued in private houses and taverns through the 1650s. But there was a general decline during the period, reversed only with the arrival of Charles II on the throne in 1660. The Restoration was the beginning of a renaissance in English theatre, a period dominated by names like John Dryden, George Etherege and Aphra Behn (the first woman to earn a living by writing), all of whom provided plays to whet the appetites of theatre-goers from every tier of society.

The Brett-Smith collection was begun around 1910 by H. F. B. Brett-Smith (Reader in English at Oxford) and continued by his son John, who sought to bring together as complete as possible a collection of Restoration plays. A large portion of the collection – containing the texts of some 1400 plays – came to the Library in 1984, with later additions. The thirteen volumes of the Verney collection contain over 1400 English political and literary pamphlets from the period 1660–1695, collected primarily by John Verney (1640–1717), a London merchant. Purchased by the Library at auction in 1987, its ephemeral contents complement the Brett-Smith collection. Both point to the fluid connections between theatre and music at the time, with musicians like Purcell writing the music for the libretti of theatrical operas by writers like Dryden. 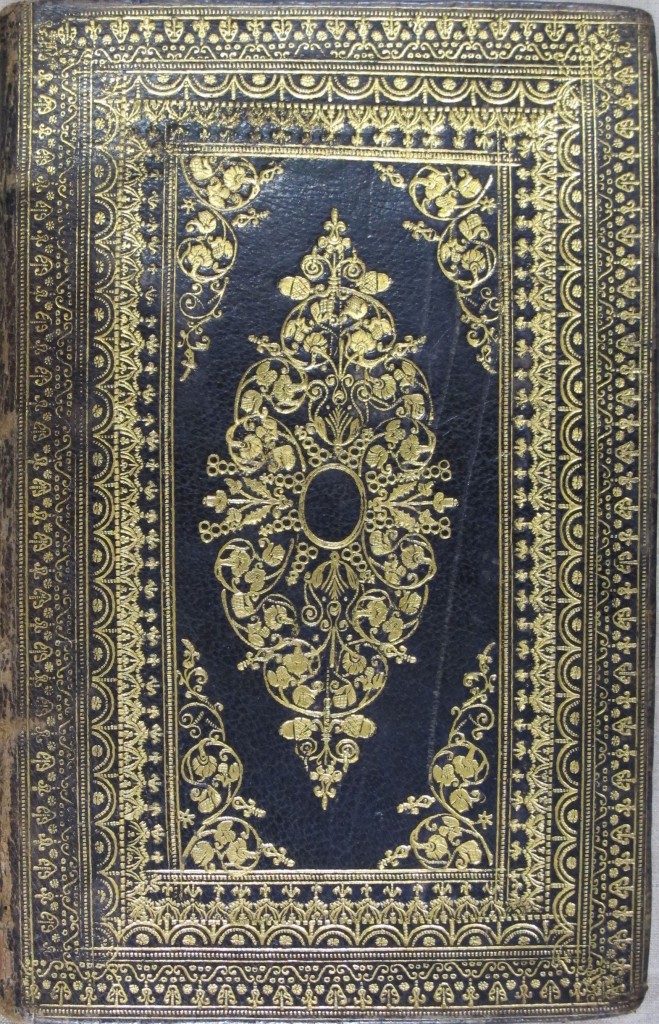 Not all plays were banned under Cromwell and those which supported his own political ideals must have been encouraged. One book included in the exhibition is Francis Goldsmith’s translation of Hugo Grotius’s Joseph (originally published in Amsterdam in 1635) and, although we do not know if it was actually performed at the time, it must have been approved of by Cromwell. The play itself mirrors the political situation of Commonwealth England: Joseph, the ideal puritan governor, restores his broken society through high morality. One of the celebratory verses within was penned by Robert Stapylton, chaplain to Cromwell and himself author of several plays during the Restoration period. This copy retains its fine contemporary binding, the decoration made up of a border of roll-tools, within which is an elaborate centrepiece constructed from individual tools. Another important book is Francis Kirkman’s ‘The Wits’ of 1672. Kirkman worked in various roles connected with books, from author and translator (his translation of book six of Amadis de Gaul appeared in 1652) to publisher, bookseller and librarian (he operated an early circulating library from 1660). His ‘Wits’ is a collection of various theatrical works popular during the dark years of the Commonwealth – when short theatrical pieces were performed in secret – many edited by Kirkman from manuscripts in his possession. The frontispiece (shown above left) is one of the earliest images of a theatre interior. The Library’s copy belonged to University Librarian and Shakespearean scholar Richard Farmer and was sold for 13 shillings (lot 6980) in his sale in 1798 (the Library holds three copies of the catalogue, one – at 893.c.2 – annotated with buyers’ names and prices paid). 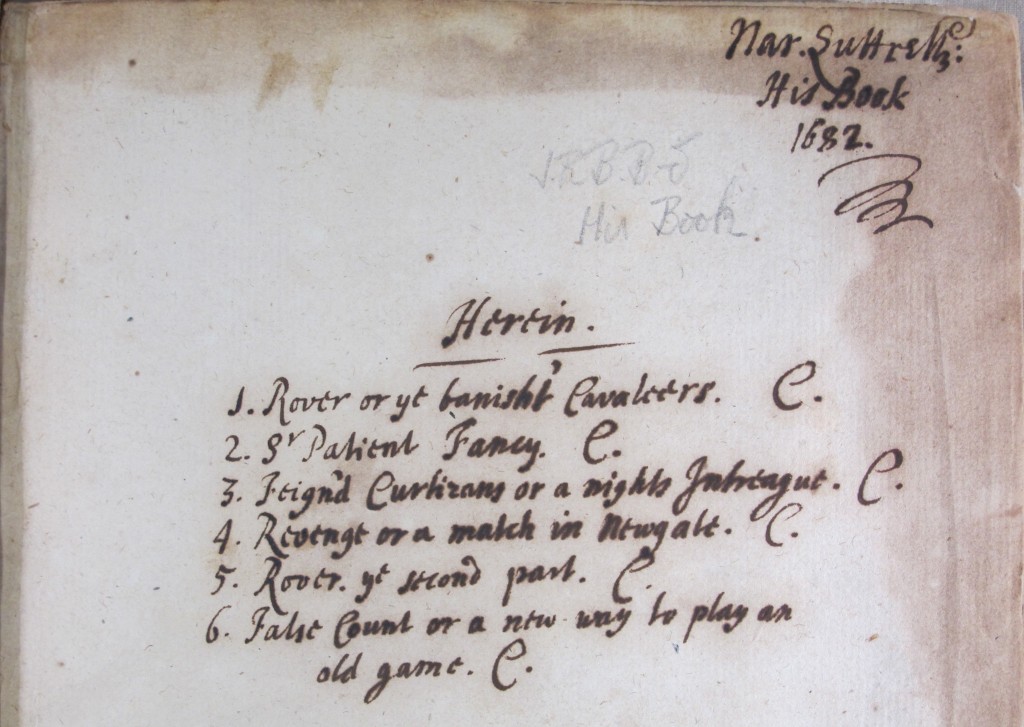 With the coronation of Charles II in 1661, theatrical performances again became an important part of life. But there were many changes, among them the rise of women both as writers of plays and actors. Chief among the former was Aphra Behn (1640-1689), one fo the first women to earn her living by writing. Employed as a spy in Antwerp by Charles II, she returned to London in 1667 and became a prolific author of plays, moving in the circle of John Wilmot, the author of a number of bawdy comedies inspired by Charles’s debauched court. Her ‘The rover: or, The banish’t cavaliers’ featured a character called Willmore (the Rover of the title), who was probably based on him. Virginia Woolf once wrote of Behn that ‘…it was she who earned them [women] the right to speak their minds.’ Included in the exhibition is a volume containing six plays by Behn, from the library of Narcissus Luttrell (1657–1732), who presumably collected the individual plays separately before having them bound. Above is his inscription, listing the titles and giving the date of his acquisition of the volume (perhaps the date when they were all bound up). At his death, part of his large library passed to Richard Farmer. 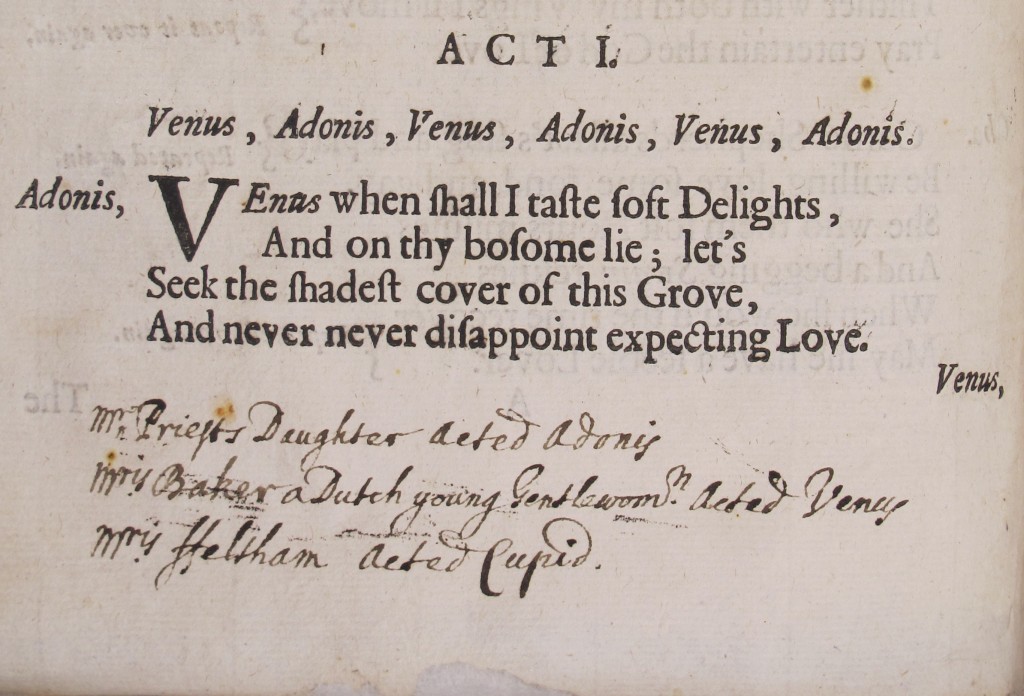 One of the other developments of the Restoration period was the close connection between music and theatre. Dryden wrote the libretti for several operas, including his King Arthur (also in the exhibition), which was set to music by Henry Purcell in 1691. Within the Verney collection (shelved at Sel.2.114-126) is one of the most significant survivals from the musical world of the seventeenth century. The four leaves making up the sixth item in one of the volumes are the only known copy of the libretto of John Blow’s masque Venus and Adonis, probably written in 1683 and often called the first English opera. Unknown to scholarship until its acquisition by the Library in 1987, it was printed for a hitherto unknown performance at the dancing-master Josiah Priest’s school, where Purcell’s Dido and Aeneas was staged in 1689. Verney’s niece was a pupil at the school and he may have attended himself: on the first page he records the date of the performance (17 April 1684) and above we see his note of the names of the three leads, including Mr Priest’s daughter in the role of Adonis.

The exhibition will remain on view in the Library’s Entrance Hall cases until Saturday 29 August and all are welcome to visit (Monday-Friday 9.00-7.00, Saturday 9.00-5.00). Please contact the exhibition curator (Liam Sims, ls457@cam.ac.uk) for further information