On Saturday 14 November the annual spectacle of the Lord Mayor’s Show, which started life eight centuries ago in the year of Magna Carta, will once more wind its way through the streets of the City of London. The University Library contains a number of ephemeral items relating to past Shows and the 800th year of this great piece of living history seems a good time to share some of them with the world. 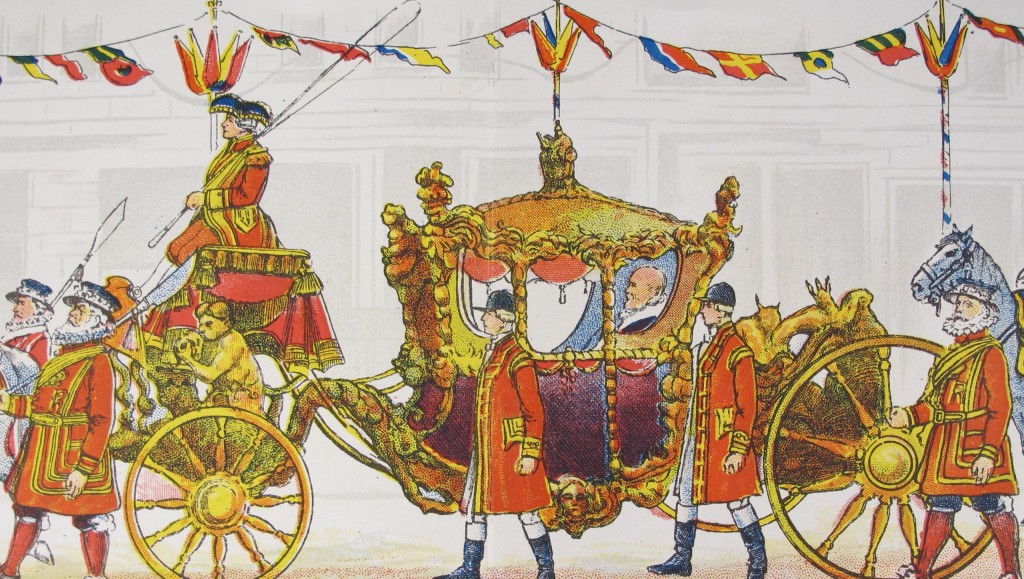 It all began in 1215, when King John granted the City of London (the relatively small area from Fleet Street in the west to the Tower in the east) a royal charter to elect its own Mayor. In return the newly elected Mayor had to travel outside the confines of the City to Westminster (the two were originally two distinct entities), in order to pledge allegiance to the monarch. 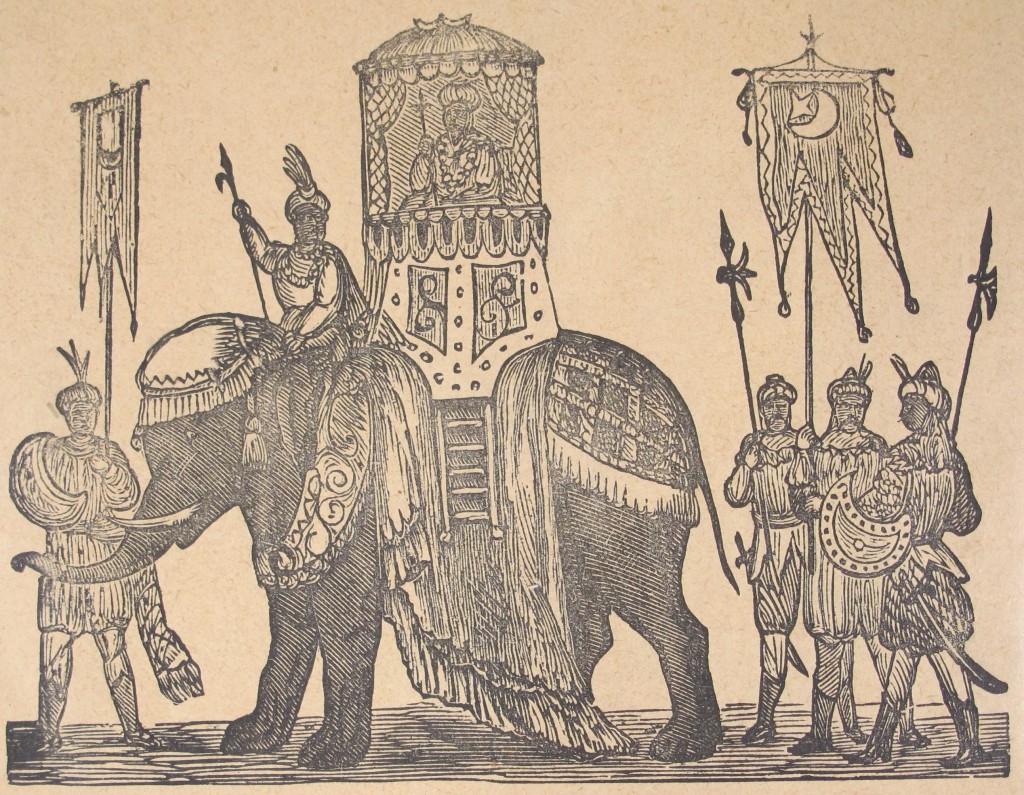 This simple journey on horseback grew into a civic procession by the fourteenth century and by the early sixteenth century it had become a day of public celebration and entertainment, first along the river Thames and more recently through the streets. The event has long featured in literary and artistic endeavours: Lord Mayors feature in several of Shakespeare’s plays, Samuel Pepys wrote of it in his diary (somewhat disparagingly in 1660, that it was ‘poor and absurd’) and the river procession was painted by Canaletto in the 1740s. Despite its public popularity it has, on occasion, been cancelled: in 1625 and 1665 due to the plague, for five years from 1666 following the Great Fire and in 1852 the date had to be changed in order that the funeral of the 1st Duke of Wellington could take place.

Today this procession (headed by wicker figures of the traditional guardians of the City, Gog and Magog) is made up of representatives from many of the City’s livery companies, charities, the military, the new Lord Mayor and a whole host of musical performers, including steel bands, bagpipes and military musicians. It makes its way from Guildhall, down Cheapside to St Paul’s Cathedral (where the Mayor is blessed by the Dean), then on down Ludgate Hill and Fleet Street to the Royal Courts of Justice, where in a short ceremony the Mayor pledges allegiance to the monarch. The procession then makes its way back to the Guildhall, but this time along the Embankment, and the day is crowned with an impressive evening fireworks display on the Thames. All this is watched by thousands of spectators and accompanied by the ringing of church bells along the route. 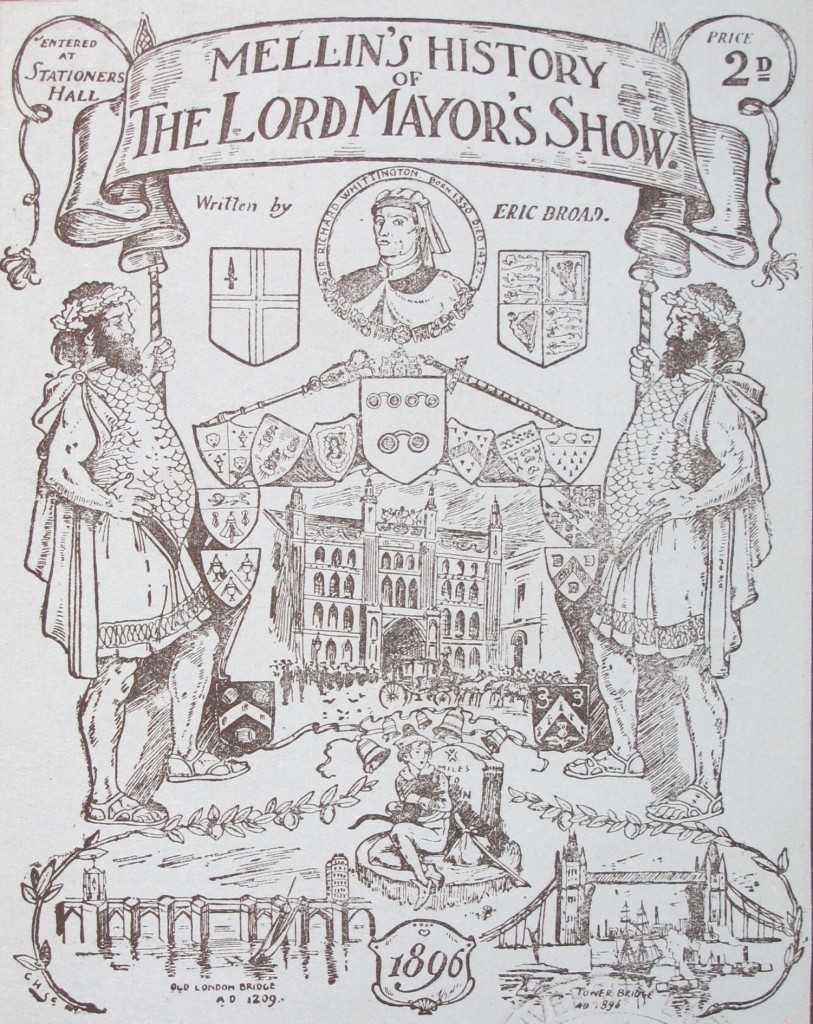 In most years since its construction in 1757 the Lord Mayor has made the journey in an elaborate golden coach (depicted towards the top of this post), commissioned by Sir Charles Asgill (Lord Mayor 1757-8). Its sides bear painted panels by the Italian painter Cipriani (by then resident in London) – who also painted panels for a similar coach made for King George III three years later – and the whole thing cost over £1000. It remains the highlight of every Show and is escorted by the Royal Watermen carrying oars, a reference to the days when the Show took place on the Thames. Forty years after its contruction, in about 1795, a poem was written to mark the Show, and this was printed (see left) on cheap slips of paper to be sold to members of the public. The Library’s copy is now the only known to survive, thanks to the efforts of Sir Frederic Madden (1801-1873), Keeper of Manuscripts at the British Library, who amassed a vast collection of ephemeral printed ballads. Illustrated with a crude woodcut of the City’s arms, the author gives a rather poor view of the conditions endured by those who would have bought copies of it at the time. He records that he ‘stood in the cold clinging fast to a stump’ to hear a ‘noise of untunable pipes’ and complains that some in the procession were ‘staggering with drink’. When the golden coach came into view, he was ‘struck with surprize, with wonder did stare’ and later he tells us he managed to get into the Guildhall to see the spectacle of the feast, evidently something of a gluttonous affair: he saw those at the table ‘With one hand at mouth, and ‘tother in dish’. By the late nineteenth century many folding panoramas of the procession were sold, as we see from the two examples showing the coach and a marching band above. 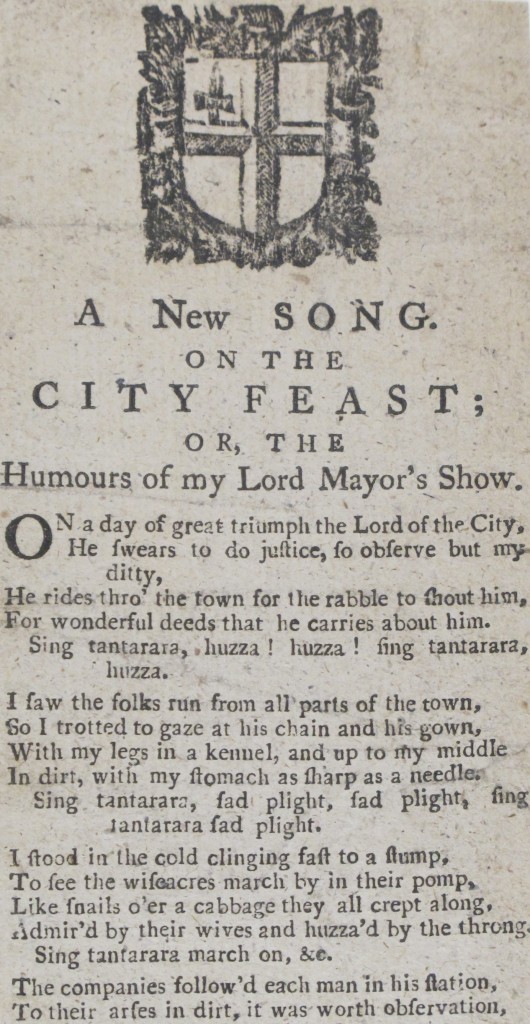 The Library holds several single-sheet ‘official programmes’ from this period, giving the route and listing the participants in the procession. In 1897, when Horatio Davies was Lord Mayor, the procession included a model of HMS Britannia, ‘drawn by six horses led by Watermen’ and a ‘fully equipped lifeboar, manned by the Hastings Lifeboat Crew’ (see below).

Finally, a copy of Mellin’s history of the Lord Mayor’s Show (1896) has a fascinating cover, with Guildhall in the centre, surrounded by illustrations of the City’s history: Richard (‘Dick’) Whittington (four times Lord Mayor in the late fourteenth and early fifteenth centuries), Old London Bridge and Tower Bridge. The booklet, curiously produced by ‘Mellin’s Food Works’, gives a history of the Show, along with information on the Guildhall, the gold coach, the City livery companies and the banquet, noting that ‘The well-fed appearance of the City Alderman has long been the subject of remark, a butt for wits, and an indisputable evidence of the sumptuous ‘feeds’ indulged in at Guidhall or Mansion House’. It goes on to record that the banquet in 1814, attended by the Prince Regent, cost £25,000 (about £1.5m in today’s money). This image of another banquet in 1814 (for the Prince Regent, Czar of Russia and King of Prussia) gives you an idea of the scene he would have beheld. The traditional banquet is still held for the new Lord Mayor.

Tomorrow’s Lord Mayor’s Show will – as ever – be an entertaining spectacle, so do have a look if you’re in the City, and enjoy the fireworks display afterwards (weather permitting). The procession will also be broadcast on BBC1 from 10.45. 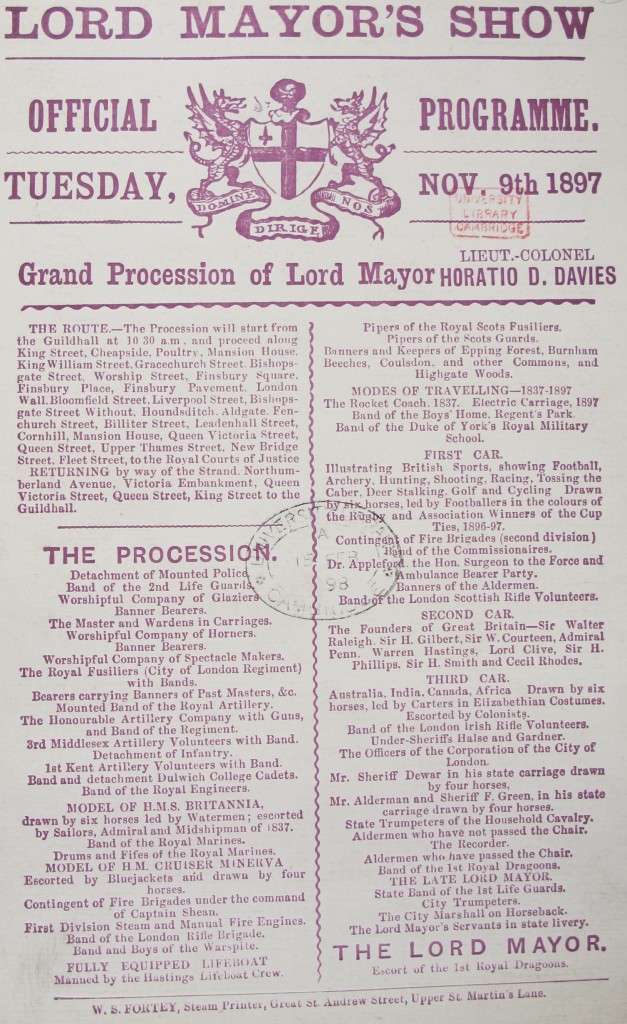