Strange goings-on and mysterious occurrences have been reported as taking place in the drawing room of Leckhampton House in the university town of Cambridge.  Loud rappings have been heard, flickering luminosity has been observed floating around the room and furniture has leapt in the air of its own accord.  This phenomena, it is contended, has been summoned by the celebrated Neapolitan medium Miss Eusapia Paladino.  Miss Paladino is residing in Cambridge as a guest of members of the Society for Psychical Research, learned men all, and including such notables as Henry Sidgwick, professor of moral philosophy at Cambridge, Lord Rayleigh, professor of natural philosophy at the Royal Institution of Great Britain, William Thomson, Glasgow professor of natural philosophy and Oliver Lodge, professor of physics at University College, Liverpool.  These men of science are keen to investigate Miss Paladino’s supposed paranormal powers with the intention of proving the existence of the same. 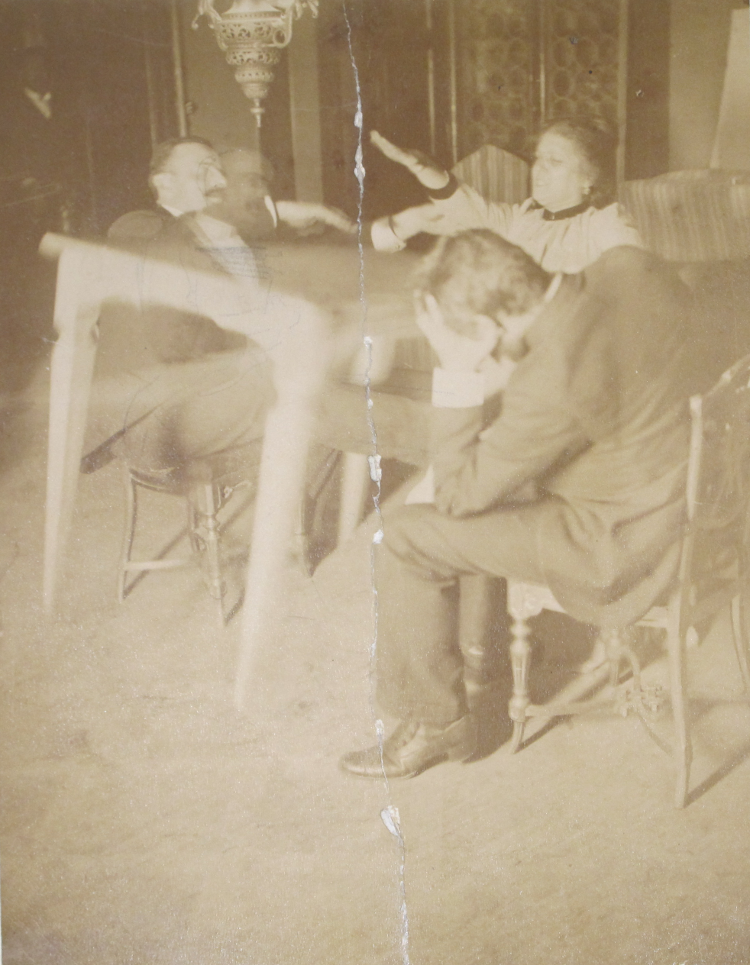 Miss Paladino, of uneducated peasant stock, has been conducting séances in darkened rooms for some twenty years throughout Europe, producing mediumistic phenomena most recently under the scrutiny of M. Charles Richet, professor of physiology at the Collège de France.  At his house on the Ile de Roubard in the Mediterranean participants in a séance were pushed and pulled while the medium’s hand and feet were being held, an ectoplasmic hand was seen to float in the air, a music box played by itself and a strange wind, rising out of a vacant corner, stirred the edges of the room.  Such sensational, and unexplained, manifestations caused the assembled company to report that there could be no other explanation than that the spirits themselves had caused these paranormal disturbances.

These fantastical reports aroused the attention of the serious men of the Society in Cambridge who wished to determine for themselves whether such phenomena could indeed help in proving the existence of the afterlife.  They therefore invited Miss Paladino to Cambridge for a series of extensive tests.  With the room darkened, lit only by a shaded oil lamp, the medium sat at a table, an eminent scientist sitting on either side holding her hands and feet. 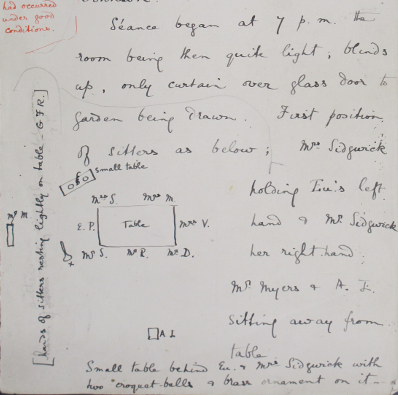 Miss Johnson’s notes of the séance.

Within minutes paranormal phenomena was observed, sparks similar to the light of fire-flies began to flicker above the medium’s head, the touching of invisible hands were felt all round the table and finally the table itself ascended towards the ceiling, fluttering down as if it were a scrap of paper.  No wonder Miss Alice Johnson, the notetaker for the party writes that “in the general excitement I got into a highly strung condition and to a certain extent I was losing complete control of myself, with however no loss of consciousness.  There was, at least, no break in consciousness, such as I have experienced two or three times on occasions of sudden and violent excitement.”

The psychical phenomena was such that some members of the Society are confident that it is all the proof needed to ascertain that unknown forces were at large in the room, perhaps even those of spirits returning from beyond the grave.  Others, including the estimable parapsychologist Mr Richard Hodgeson who was present at a previous séance given by Miss Paladino, are not so convinced.  He believes that “systematic fraud has been used from first to last, and that there is no adequate reason to suppose any supernormal agency whatever.” This fraud, he contends, is enabled by Miss Paladino’s dexterous ability to free a hand or foot from the grasp of her interrogators without them being aware of this trickery, thus leaving her free to poke, prod and twist with impunity under the cover of darkness, even able to overturn a nearby chair with a swift kick before returning her foot to its place under the table.

The medium’s trickery revealed. Mr Hodgson’s notes on how a fraud could be realised.

We leave our readers free to make up their own minds as to the nature of these mysterious occurrences.  Further investigations can be undertaken in the Archives of the Society for Psychical Research, a catalogue of which is available on the Janus website.