Posted on 1 February 2016 by William Hale

The Rare Books Department of the Library purchases over 200 printed books each year to enhance its historical collections. In the first of what we intend to be a monthly series, here is a brief description of the principal acquisitions made in January 2016.

A book of poetry by Thomas Bakewell, weaver, mad-doctor and asylum-keeper. Includes a number of poems on psychiatric subjects. Other books by Bakewell can be found in the Library’s Hunter collection of works on mental health. 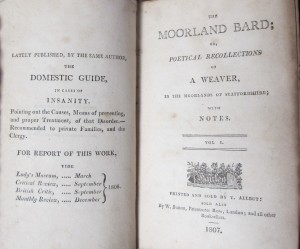 The title page of The moorland bard, showing an advertisement for a work by Bakewell on insanity.

A scarce Dutch edition of Sterne’s Sentimental journey, in the translation by Joseph-Pierre Frénais (d. 1788?). The Library’s collection of works by and related to Laurence Sterne is founded on that of J.C.T. Oates.

A treatise on painting by the prolific French writer and educator Madame de Genlis. The book includes sections on how to mix colours, and a new method of teaching children to draw and paint. It is illustrated with 25 plates, of which 5 are hand coloured.

A work of moral education for young girls, written as a series of letters between mother and daughter. With the printed book label of “M. Pechin, lieutenant-assesseur et premier conseiller au présidial de Langres”, who is probably Jean-Claude Bernard Pechin, twice mayor of Langres, Champagne, in the late eighteenth century.

Two responses to a controversial work on Protestantism published in 1682 by Louis Maimbourg (1610-1686), a Jesuit who was expelled from the order in the same year. Both works were condemned by the Catholic authorities and burned publicly at the Place de Grève by order dated March 6, 1683. They are here preserved in a contemporary binding with some notes by an early owner. 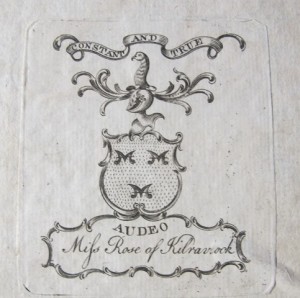 An account of the sensational trial of the Catholic clergyman, polemicist and Irish patriot Thomas Maguire. A Protestant innkeeper, Bartholomew M’Garahan, accused Maguire of seducing his daughter Anne and making her pregnant. Maguire’s successful defence was conducted by Daniel O’Connell. An addition to the Library’s extensive collection of Irish books, founded on the family collection of Henry Bradshaw.

An unrecorded provincial printing of the “Constitution de l’an VIII”, by which the Consulate under Napoleon Bonaparte was established. A contemporary manuscript note, sadly cropped, details how the Constitution was published and distributed.

A copy in original boards of the second issue of the collected poems of John Cunningham, an Irish-born poet who had the time of its publication settled in Newcastle. The volume bears the bookplate and inscription of Elizabeth Rose of Kilravock (1747-1815, above), a cousin of the writer Henry Mackenzie, whose commonplace books in the National Library of Scotland detail her extensive reading. 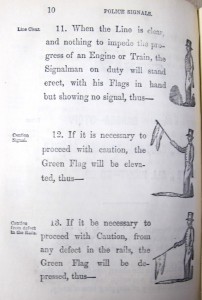 Hand signals, from the Rules and regulations of the London and North Western Railway.

Three railway company rule-books from the early days of rail travel. Given by Michael O’Donoghue, donor of a collection of illustrated books on gemstones housed at CCA-F.54.