Crowd-sourcing the archives of women’s rowing

Question: how do you write the history of Cambridge University Women’s Boat Club when the records in the club’s possession are scanty for the early years? Answer: encourage former members to contribute souvenirs and memories and build the archive retrospectively. Now deposited in the University Archives and described online on Janus, this accumulation of letters, photographs and news cuttings, among other things, has been invaluable to Jane Kingsbury and Carol Williams, authors of Cambridge University Women’s Boat Club 1941-2014. The struggle against inequality (Trireme, Cambridge: 2015) (available from the CUWBC history website). 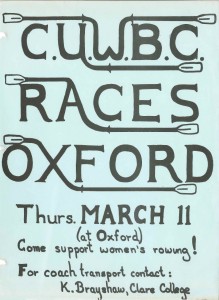 A little background: from 1893 onwards, Newnham College alone regularly maintained a Boat Club, but in 1941 students from Girton were invited to join Newnham to form a joint University crew to compete again Oxford. The Club dates its foundation from this event. The first Boat Race was held on the Cam on 8 March 1941; Oxford were the winners.

Iris Preston (Newnham 1939), was instrumental in founding the joint club and rowed in the Boat Races of 1941 and 1942. Her lifelong enthusiasm for women’s rowing and research into its early history began the process of rediscovery up to 1950. Similar initiatives by later club members elicited reminiscences, posters, regatta programmes, crew lists and photographs for the following decades.

As vital as surviving committee minutes and treasurer’s reports are to the giving of an accurate account, this club history is hugely enlivened by records of sporting activities: records, that is, of what the club is for.