A Fruitful Resource : a guest post by Jonathan Spain

The Map Department of Cambridge University Library has a collection of British estate agents’ sales particulars dating largely from the early 19th century through to the mid-20th century (though there are also a few from the 18th century). For anyone doing local history research these are a valuable source of information.

Auction houses and estate agents produced ‘sales particulars’ in advance of the public auction of local properties and larger landed estates. These sales particulars generally took the form of a detailed schedule providing a physical description of what was for sale. In cases where the estate was large the property was divided into numbered lots offered for sale separately. Information was also provided as to the owners and occupiers of the property and sales particulars were often accompanied by large scale plans based on Ordnance Survey maps. In some cases the names of the successful bidders for the property at public auctions are noted in the margins. In the ‘terms and conditions’ of sale, these particulars would often have detailed notes concerning the early origins of the property and the commencement of legal title.

For the purposes of my research into fruit farming in South Cambridgeshire, sales particulars provide information on local orchards, their owners and occupiers, often describing the size of the holding and giving lists of the types of fruits grown and named varieties. In some cases I have been able to trace the history of individual orchards and their owners and tenants from the mid-19th century through to the 1980s.

The villages of South Cambridgeshire became established as a fruit-growing district in the latter half of the 19th century. The area was known as a plum and greengage growing district – the Cambridge Gage remains a popular variety to this day. Commercial fruit-growing in South Cambridgeshire reached its peak by the 1930s, going into decline from the 1960s and more or less dying out by the 1980s. The rise and fall of this industry are the focus of my study.

A particularity useful find was a sales particular for properties in Barrington [classmark Maps.PSQ.19.491] and the detailed accompanying plan. It dates from 1937 and concerns the sale of the estate of Albert Prime, a well-known farmer and fruit grower in Barrington. You can see from the plan just how important fruit growing was to the economic life of the village at this time.  Many of the orchards were located on closes fronting the long village green. In the early 20th century, during the season, the smaller fruit growers would leave half-bushel baskets of fruit outside their cottages for the local carrier to collect and deliver to Shepreth railway station, for onward transit to King’s Cross and Covent Garden. 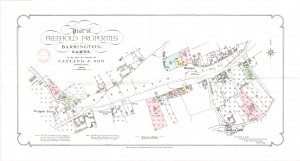 Map from sales particulars for freehold properties in Barrington, Cambridgeshire, to be auctioned on 22nd September 1937 [Classmark Maps.PSQ.19.491] 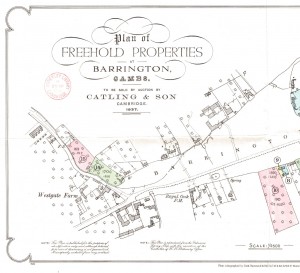 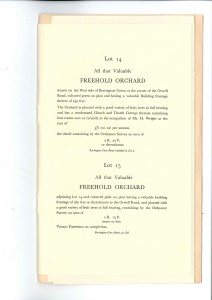 The Map Department collections include some 6,500 catalogued sales particulars plus approximately 10,000 in the process of being catalogued.

In line with the rest of the Map Department’s collection, most of the sales particulars are only findable through the Map Department’s card catalogue – come and visit us or get in touch to see if we have anything that might be of interest to you. However, a constantly increasing number can be identified via the Library’s online catalogue.  In this partly pre-populated search in iDiscover just add a place name in the ‘Any field’ line or, if this retrieves too many non-relevant results (e.g. for larger places such as Cambridge), change the ‘Any field’ option to ‘Subject’. In addition, some sales particulars are now catalogued on ArchiveSearch.