Books added to the collections of the Rare Books Department this month include a French almanac, a further addition to our holdings of Enlightenment texts, a range of Italian writing from the late nineteenth century and a souvenir of the Entente cordiale of 1905. 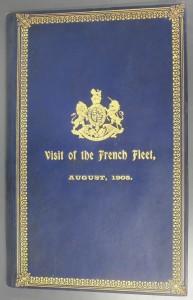 Front cover of Visit of the French fleet (1906, below)

A legal treatise by a long-lived professor of law at the University of Bologna, later a member of the Italian senate, and chiefly remembered as an advocate for the abolition of the death penalty. From the library of Denis Mack Smith.

Another book from the library of Denis Mack Smith, containing literary and historical essays by the nineteenth-century philosopher and prominent citizen of Florence, Augusto Conti. 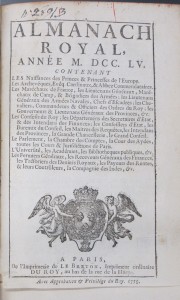 A book of fictionalised accounts of the lives of tramcar passengers in nineteenth-century Turin, from the library of Denis Mack Smith. The author is best known for his novel Cuore (1886), written in the voice of a nine-year-old Turin schoolboy.

An eighteenth-century French work on human understanding referencing Rousseau, Locke and Helvétius, and concentrating particularly on legal and economic systems. 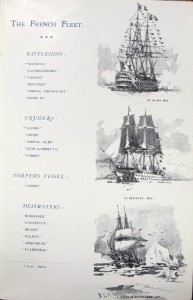 Historic French warships, from Visit of the French Fleet (1905)

The official French almanac ran from 1700 to 1847, its title changing according to the prevailing political system. This issue fills a gap in the UL’s holdings of its mid eighteenth-century incarnation.

Visit of the French Fleet, August 1905
(London : Eyre and Spottiswoode, 1905)
Syn.4.90.113
A handsome souvenir of the French naval visit to the Solent of 1905, held to mark the signing of the Entente Cordiale the previous year. Bound in gold-tooled crushed blue morocco, the programme of the week-long festivities features illustrations of historic warships and includes a coloured map of the positions of the Fleet, printed on silk. The Library’s Hanson collection, part of the library of the Cruising Association, includes a wide variety of works on naval matters.