The irresistible search for hidden Scriptures

Eighty years ago in 1936 Cambridge University Library received a manuscript, bequeathed  by its owner Agnes Smith Lewis at her death in 1926. It is not unusual for a bequest to take a while to reach its final destination. In this case however, the intricacies of the “whereabouts” – and the “what-abouts” – reveal a conundrum of covering up, uncovering and discovering a material object (codex) and its meaning that is yet to be fully understood. 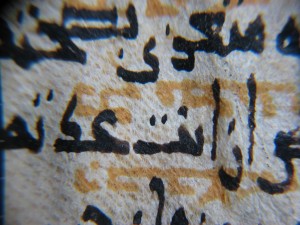 Enlarged detail of the palimpsest, showing the under-writing

This complex artefact (CUL MS Or. 1287), recently added to the Cambridge Digital Library, is a palimpsest containing portions of two ancient Qur’anic manuscripts, identified here as the Large and Small Qur’anic leaves, probably written within the first or second Century of the Islamic calendar (7th or 8th century CE). The term ‘palimpsest’ describes a manuscript where the original text (or under-writing) has been erased to create a clear writing surface for a new text (or over-writing). Thanks to  recently completed research by Dr Alba Fedeli, we know today that the parchment leaves were re-used by the monks of Saint Catherine’s Monastery at Mount Sinai in the 9th or 10th Century CE to copy a selection of Christian homilies in Arabic.

When Agnes Smith Lewis bought the codex from a dealer in Port Said in 1895, numerous artefacts and ancient scriptures were in circulation for sale. The flourishing market in Egypt allowed her to discover manuscripts which were originally part of the Genizah of the Bin Ezra Synagogue in Fustat (Old Cairo). The sisters acquired about 1700 manuscript fragments, today known as the Lewis-Gibson Collection, before they passed the project on to their colleague Solomon Schechter who brought the largest portion of the Cairo Genizah to Cambridge. 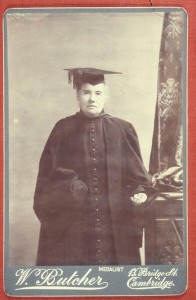 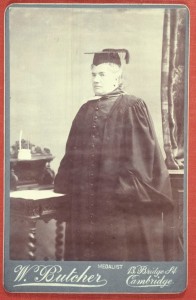 The twin sisters Agnes Smith Lewis and Margaret Dunlop Gibson had gained fame in academic circles in late 19th-century Cambridge and abroad for their discovery of the Syriac Sinaiticus, the oldest surviving copy of the Gospels in Syriac, and for their numerous scholarly works including editions and translations of primarily Christian Hebrew and Syriac texts. At a time when the University of Cambridge only reluctantly admitted female students (and never awarded them degrees), the sisters were granted honorary doctorates from several universities, in Germany (Heidelberg, Halle -Wittenberg), Scotland (St. Andrews) and Irland (Dublin).

The discovery of, and work on the Qur’anic leaves of the palimpsest by Agnes Smith Lewis, however, did not contribute to her scholarly recognition. Was this because of the ultimate predominance of male scholars in proclaiming their “knowledge”, or because of Smith Lewis’ readiness to acknowledge her uncertainties? About ten years later, following the publication of her Apocrypha Syriaca in 1902, Alphonse Mingana (1878-1937), the Assyrian scholar, collector of manuscripts and a native speaker of Arabic, became instrumental in publicising an edition based on the still incomplete recovery of the under-text supplemented by a series of “learned” interpretations. Up to that date, no further advanced method of uncovering the under-writing had been found. The attempt to retrace it proved an insurmountable challenge despite the application of an aggressive chemical reagent, then in common use.  In 1914 Mingana and Smith Lewis published Leaves from three ancient Qur’ans – possibly pre-Othmanic, with a list of their variants, referring to the standard Qur’anic text as authorised by the Caliph Uthman in the seventh century and since then established beyond dispute.

While the publication deliberately provoked controversy, it also aroused much curiosity. In the very same year the manuscript was requested for display at the exhibition Internationale Austellung für Buchgewerbe und Graphic, and sent to Leipzig, the German city which was one of the strongholds of Oriental Studies at the time. 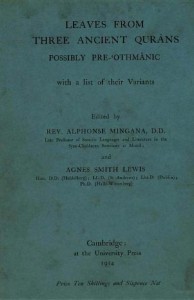 Smith Lewis wrote the preface to the 1914 publication while Mingana wrote a lengthy introduction. All subsequent criticism of this work was addressed exclusively to him and his interpretation of the under-text. The manuscript has thus until recently been known as the “Mingana-Palimpsest”.

21st century academics Alba Fedeli and Alain George, who conducted their research independently and at varying length, have reached synergy in their conclusion that two originally coherent manuscripts constitute the Qur’anic under-writing and not three, as stated in the 1914 publication by Mingana and Lewis.

The manuscript was never returned to Smith Lewis. Nonetheless, she did not omit to account for it in her will, bequeathing it as the only item from her collection to go to Cambridge University Library, to ensure its safeguarding and access for future scholars. The outbreak of World War I and its aftermath obscured the facts around the disappearance of the manuscript until a determined investigation, led by the Cambridge theologian John Wood Oman (1860-1939) and one of his young students, succeeded in finally returning the manuscript to Cambridge in 1936.

In 2011 Dr. Alain George, a specialist in Qur’anic calligraphy published an article after repeatedly consulting the Palimpsest. His research focused on “its Arabic scripts, both Qur’anic and Christian, and on the palimpsest as a historical document.” In the English summary of the same he states “There are […] strong reasons to think that this is one of the earliest Qur’anic fragments in existence” and that “the Cambridge palimpsest stands out as an extraordinary witness in the history of the Qur’an.”

Since 2008 Dr. Alba Fedeli, a scholar of Qur’anic manuscripts, has engaged in an extensive research project on the manuscript, creating a complete edition of the text including all of the leaves (seven of which have never been edited before), as well as editorial notes, comments, and comparisons with the 1914 edition. Her forthcoming book reveals contextual evidence relating to its origin and the full story behind its disappearance and recovery. It also pays tribute to the original work of Agnes Smith Lewis and acknowledges her hesitation in creating a definite transcription of the under-writing. The main focus of Fedeli’s work was to embark on a new attempt to access the Qur’anic under-text, using high resolution UV and natural light images in imperfect registration. This painstaking attempt to reconstruct the under-writing Fedeli insists on calling a “hypothetical reconstruction”, a possible reconstruction based on her understanding and interpretation.  The result of her reconstruction can be freely accessed in the Cambridge Digital Library. The following article by her explains the methodology in greater detail, accompanied by a digital visualisation.

Head of Near and Middle Eastern Department, CUL

Interpreting the Qur’ānic leaves through their digital images: a hypothetical retracement

The online images of the small and large leaves of the Mingana-Lewis Qur’ānic palimpsest are an expedient to display an interpretation of the text. The interpretation can be seen as a sequence and movement as shown in this video.

The proposed sequence of this interpretation shows firstly, the original image taken with natural light; secondly, the remnants of the under-writing which are basically what we can read through the use of ultraviolet and infrared images, and lastly, the hypothetical retracement of the under-writing in which I have added sections of letters covered by the black ink of the upper-writing. This interpretation is based on the simultaneous use of different images of each single leaf captured by the Digital Content Unit of Cambridge University Library: colour images using flash lighting, greyscale images using flash lighting, colour images and greyscale images using a B+W 420 filter and UV lighting, greyscale images using a B+W 092 filter and infrared lighting. The different images of the same leaf were misaligned because they were captured under variable conditions and positions of the leaf. Thus, they have been aligned, although at a few points it was impossible to obtain a perfect image registration process. Despite the different kinds of images, the interpretation always displays the natural yellow colour of the parchment, the pale brown ink of the under-writing that has been enhanced as far as the UV images show and the original black ink of the upper-writing.

The result here proposed is a hypothetical retracement of the under-writing of the palimpsest. The definition ‘hypothetical’ aims to underline the fact that this is an interpretation of the manuscript text, as two scholars will never produce two identical retracements, even using the same set of images. The retracement itself corresponds to the transcription of the text proposed here. The term ‘retracement’ perfectly expresses the physical and intellectual work that has been done: the repeated act of tracing and retracing the upper-writing and under-writing of the leaves using tablet and pen technology. 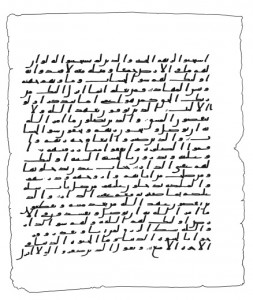 The reading of the text underneath the hypothetical retracement looks something like this leaf: 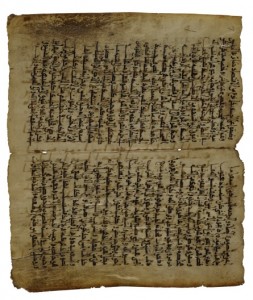 However, this image of the text does not exist, as it is a supposed reading, the editor’s interpretation. It has an abstract ideal dimension. The original and real image is the palimpsest with its two intertwined layers, the upper-writing and the under-writing: 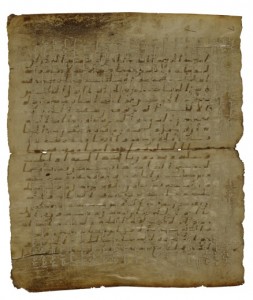 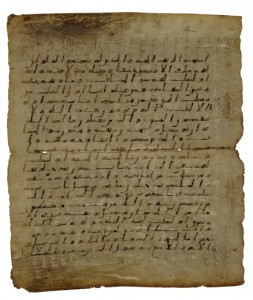 The missing parts of the brown ink of the under-writing, i.e. those sections covered by the new layer of the text of Christian Arabic homilies, have been added to the ‘remnants’ in the above retracement. Not all of the illegible sections have been retraced, but only the gaps in the traits of the brown ink. However, as these additions are hypothetical, their retracement keeps the original colours: brown for the still visible remnants that have been enhanced as far as the UV images show and black for the sections of the upper-writing that cover the under-writing, so that the users of these online images can be always aware of the physical object without relying on its abstract ideal dimension, divorced from the manuscript.

The divorce from the object and its physicality has influenced the criticism of the edition published by Agnes Smith Lewis and Alphonse Mingana in 1914. Some of the variants discussed by scholars in the last century do not exist, as they are the result of the ‘noise’ of the palimpsest, with its faded ink, spots and holes, besides the overlapping layers of ink. Despite the impression of a mathematically perfect correspondence with the original artefacts given by the use of digital images and retracements proposed here, the reading keeps its intrinsic nature of interpretation.

A complete and detailed description of the process of retracing the under-writing is described in Fedeli, Alba, ‘Early Qur’ānic manuscripts, their text, and the Alphonse Mingana papers held in the Department of Special Collections of the University of Birmingham’, PhD thesis, University of Birmingham (2015) and the forthcoming book based on this dissertation.

Fedeli, Alba. ‘The digitization project of the Qur’ānic palimpsest, MS Cambridge University Library Or. 1287, and the verification of the Mingana-Lewis edition: where is salām?’ Journal of Islamic Manuscripts, 2, 1, 2011, pp. 100-117.

Smith Lewis, Agnes. Apocrypha Syriaca. The Protevangelium Jacobi and transitus Mariae, with texts from the Septuagint, the Corân, the Peshiṭta, and from a Syriac hymn in a Syro-Arabic palimpsest of the fifth and other centuries, with an appendix of Palestinian Syriac texts from the Taylor-Schechter Collection. Studia Sinaitica No. XI. London, C.J. Clay and Sons, 1902.