Glimpses of early Siam and Burma [Thailand and Myanmar] 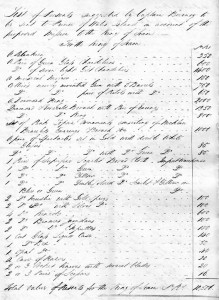 The Royal Commonwealth Society Library has just created an electronic catalogue for one of its largest and most significant manuscript collections: the papers of the diplomat, colonial administrator and orientalist Henry Burney (1792-1845). Burney was born in Calcutta, the son of a Senior Master of the Calcutta Military School for Orphans.  His grandfather was the musicologist Dr Charles Burney and his aunt the novelist Frances Burney.  Burney was commissioned into the East India Company’s army in 1808, but transferred to its political service when appointed Military Secretary to the Governor of Penang in 1818.  From 1825 he served as Political Agent to the states adjacent to Penang and led several political missions.  From the beginning of his career, Burney had displayed a gift for oriental languages, soon mastering Hindustani, and during this time he acquired Siamese and Malay.  Burney’s grasp of local politics and languages led to his appointment as Envoy to the Court of Siam, and he travelled to Bangkok in September 1825.  By June 1826 he had successfully negotiated a treaty with the King. 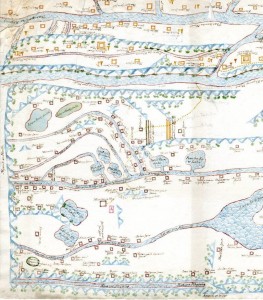 In 1827 Burney was posted to the new British province of Tenasserim, which had been acquired during the First Anglo-Burmese War (1824-1826), serving as Deputy Commissioner of Tavoy.  Burney immediately began learning Burmese.  In 1829, he acted decisively to suppress a rebellion.  His diplomatic experience and linguistic skill were further recognised in 1829 with the appointment as the Indian government’s representative to the Burmese Court.  Burney arrived at the capital of Ava on 24 April 1830, establishing the first British Residency.  Burney’s study of Burmese (with the aid of a tutor) had advanced so rapidly that by April 1832 he was able to communicate directly with the Burmese ministers in their own language.  He enjoyed initial success, resolving the problem of banditry on the Arakan and Tenasserim frontiers and a territorial dispute on the Manipur border.  He also persuaded the Burmese government to pay the final instalment of the indemnity owed as part of the war’s settlement. 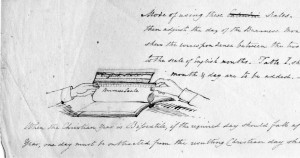 Diagram from Burney’s scales for comparing the Christian and Burmese calendars, 1830s, RCMS_65_3_2

King Bagyidaw appreciated Burney’s efforts to foster good relations, honouring him with a Burmese title inscribed on gold leaf, Mahaz-eyayazanawrahta, accompanied with a badge of office, a nine-stranded salwe.  Burney’s position, however, was undermined in 1837 when Bagyidaw was deposed by the Prince of Tharrawaddy, who later became King, and he found it difficult to work with the new regime.  Burney was recalled on 8 March 1838 and went on furlough to England.  In 1842, he returned to active service with the EIC army, but died at sea in 1845 while travelling to England on medical leave. 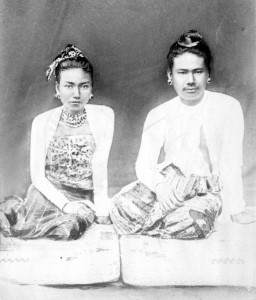 The collection preserves important records of Burney’s diplomatic missions: his instructions, travel, correspondence, journals and reports, which include rare insight into the Siamese and Burmese Courts. It also contains examples of traditional texts, such as Siamese kradat phlao and Burmese black parabaiks and palm leaf manuscripts.  Burney shared the family’s intellectual curiosity and literary flair, and was fascinated by Siamese and Burmese culture.  He researched the two countries’ climate, geography, languages, history, philosophy, religion, astronomy, mathematics and astrology, and collected important translations from original sources.  Burney presented papers to learned bodies such as the Royal Asiatic Society and published in the ‘Journal of the Asiatic Society of Bengal’, the ‘Asiatic Journal’ and the ‘Journal of the Statistical Society.’  During the early 1840s, Burney received permission from the EIC to publish the journal of his mission to Siam and it is possible that he also contemplated writing a pioneering English language history of Burma.  With the resumption of his military career, ill health and an early death at the age of 53, however, these plans never came to fruition.  The RCS is also fortunate to possess a number of early photograph collections relating to Burma dating from the 1870s (RCS Y3029A-F), which complement the Burney archive.

To view the Janus catalogue of the Henry Burney Collection, RCMS 65, please follow this link: https://janus.lib.cam.ac.uk/db/node.xsp?id=EAD%2FGBR%2F0115%2FRCMS%2065