Additions to the stock of the Rare Books Department this month include a nineteenth-century book of College verse, a satire from the period leading up to the Reform Bill of 1832 and an eighteenth-century book prospectus from Zurich.

Pembroke songs and verses
([Cambridge] : for private circulation, 1888)
Humorous verses, some founded on traditional songs or songs from Gilbert and Sullivan operettas, concerning the fellows and undergraduates of Pembroke College Cambridge. 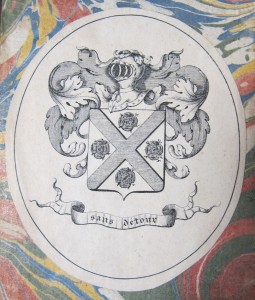 A re-issue of a popular novel first published in 1741. Part of the “Bibliothèque amusante”, a collection of French novels published with false London imprints in the 1780s. The anonymous bookplate is from a member of the Briant de Laubrière family of Brittany.

An American edition of a popular series of “discourses” or sermons by the Quaker minister Samuel Fothergill. Bought with a donation from Dr Christopher Wright, in memory of David J. Hall (1947-2015), former deputy librarian at the University Library and a collector of books on Quaker history.

Society for the Promotion and Improvement of the Growth of Flax in Ireland.
The eighth annual report and transactions
(Belfast: Francis D. Finlay, 1849)
Hib.5.849.32

Two pamphlets on Irish agriculture, dating from the period just after the potato famine. From the library of the Royal Agricultural Society of England, sold in 2014. 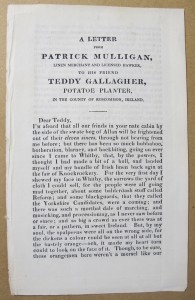 A satire on parliamentary reform, written in the voice of an Irish emigré. Similar letters published in Whitby around the same time are attributed by the British Library to a D.H. Grose.

A prospectus for an edition of Simler’s collection of correspondence between leading figures of the Protestant reformation, accompanied by a sample letter from Lady Jane Grey to the Swiss reformer Heinrich Bullinger. The collection was never published.