Manuscripts Image of the Month – The Maxim Airplane 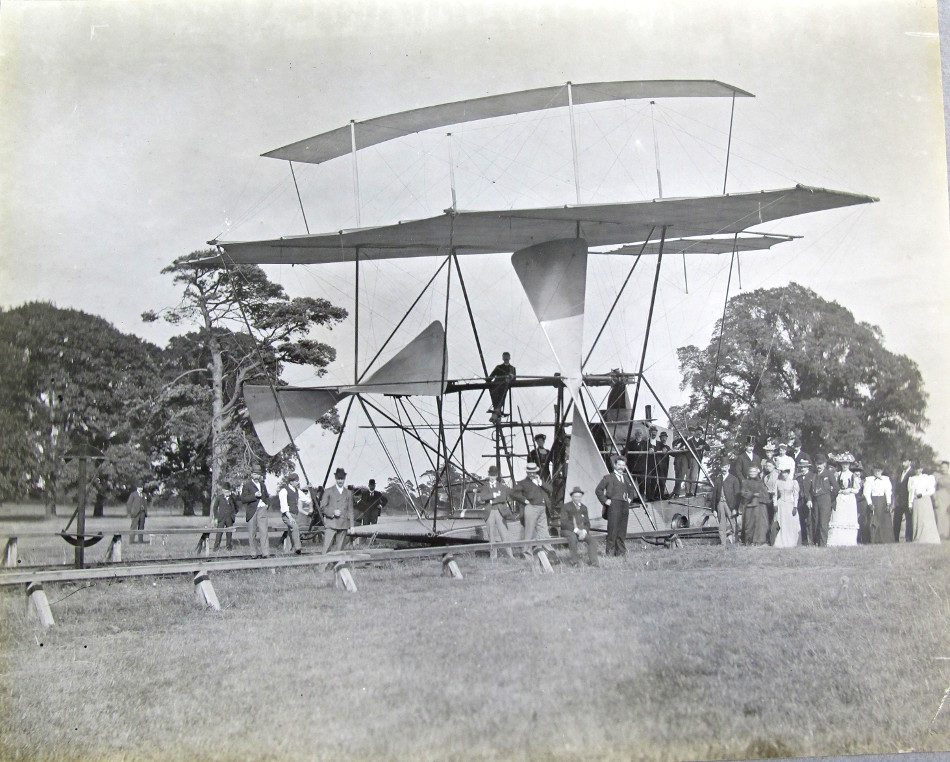 In 1894, Sir Hiram Stevens Maxim, American born engineer and inventor of, amongst other things, the first machine gun, completed the construction of a ‘flying machine’ in Bexley, Kent.  At 40 metres in length and 30 metres wide, and powered by two 150 hp steam engines it weighed in at over 4 tonnes.  The machine was built to run on a line of light railway; once it gained enough speed it would lift from the ground.  In order to prevent the plane from soaring, uncontrolled, into the air additional wheels, fitted as ‘outriggers,’ were designed to run on inverted train tracks fixed on wooden rails raised two feet in the air running parallel with the railway.

On 31st July a small crowd of spectators watched as the machine was wheeled into place on the track and secured to a post while the engines got up a head of steam.    At a given signal the airplane was released and, with Maxim and two assistants hanging on grimly to the deck, it shot along the track, almost immediately reaching a speed of 40 mph.  Within seconds the machine had risen off the inner wheels and could be seen to be flying for some 150 metres, held down by the outer inverted rails.  Unfortunately, the airplane proved too powerful for the flimsy wooden structure.  With a tearing and ripping of planking, the machine broke free of its restrictions and attempted to climb into the air, only to catch on the rail, twist round and crash to the ground.  Maxim’s assistants were thrown through the air, sustaining minor cuts and bruises, whilst Maxim himself hung on to a strut and landed with the craft, walking away without a scratch.  Perhaps this calamitous experience proved a salutary lesson to Maxim because, though he continued his aeronautical research for some years hence, he and his craft never flew again.

This photograph is taken from an album of pictures recording the construction of the craft and its flight.  It is part of the Vickers Archive with a reference of Vickers Doc. 2008 and is available for consultation in the Manuscripts Reading Room.

The photograph is produced by permission from the Vickers Archive held at the Cambridge University Library.