Manuscripts Image of the Month – the Illustrations of James McBryde 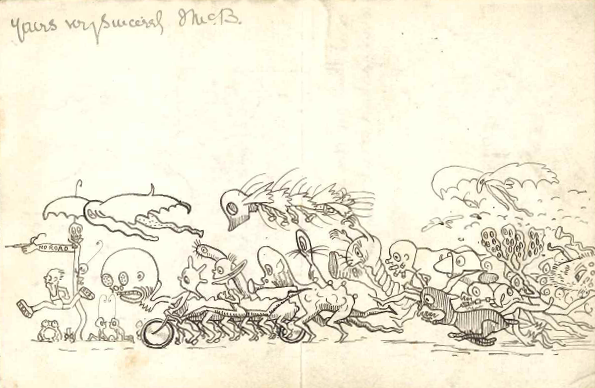 James McBryde came up to Cambridge in 1893 from Shrewsbury.  Whilst at King’s College he joined the circle of friends surrounding the scholar M.R. James and was included in the select few who would listen to the ghost stories told by James in his college rooms.  On leaving Cambridge McBryde intended following a career in medicine, but after medical training he decided on a career in art instead and enrolled in the Slade School of Art in 1902.  He and James had remained close friends, and it was agreed that MacBryde would contribute the illustrations to an anthology of James’ famous ghost stories.  Sadly, McBryde had completed only four drawings when he died suddenly after complications following an operation to remove his appendix in 1905.  Though other illustrators were suggested, James insisted that the book, Ghost Stories of an Antiquary, should be published with only McBryde’s illustrations.  James also arranged for The Story of the Troll Hunt, a children’s book which McBryde had completed in 1899, to be published posthumously.  The Manuscripts department has a number of letters which McBryde wrote to James in collection MS Add.7481, some of which are illustrated with delightful drawings such as the one above.