The Book of Saint Albans (or Boke of Seynt Albans) is the common title of a 1486 book, a compilation of matters relating to the interests of a gentleman of the time. It contains three essays, on hawking, hunting and heraldry. It was the last of eight books printed by the so-called Schoolmaster Printer at St Albans in England in the 1480s. It is also known by other titles, such as “The Book of Hawking, Hunting, and Blasing of Arms”.

Besides being famous for its lists, including the first printed lists of recognised breeds of dogs and of collective nouns (e.g. ‘swarm of bees’, ‘murmuration of starlings’, ‘superfluity of nuns’), The Book of St Albans has long been celebrated for being the first book printed in England with images in colour. The coats of arms illustrating the section on heraldry are the first colour prints made in England, and they were long considered to be the only images printed in England for more than two centuries. This was challenged in the exhibition Tudor Colour Printing, which presented many ways in which colour was printed in books in sixteenth-century England and resulted from Dr Elizabeth Savage’s research as 2012-13 Munby Fellow in Bibliography.

The coats of arms were printed in jewel-like heraldic tinctures: gules (red), vert (green), azure (blue), sable (black) and or (yellow/gold), with the white of the page for argent (white/silver). Some of the coats of arms’ colour inks have a cloth-like texture, which cannot be achieved at the press using any known materials or techniques. So, how were they made?

The University Library Rare Books department has a copy at Inc.3.J.4.1[3636] and Dr Savage, now a British Academy Postdoctoral Research Fellow based in the Centre for Material Texts, has kindly agree to give a brief, very informal talk in the Rare Books room, during which the book will be on display.

This talk will explore how the visionary schoolmaster could (and couldn’t) have made these extraordinary images – and why unlocking his forgotten secrets is so important today.

Please do join us at 13:00 in the Rare Books Room on Monday the 20th June! Space is limited – Library members only, but feel free to join and come along. 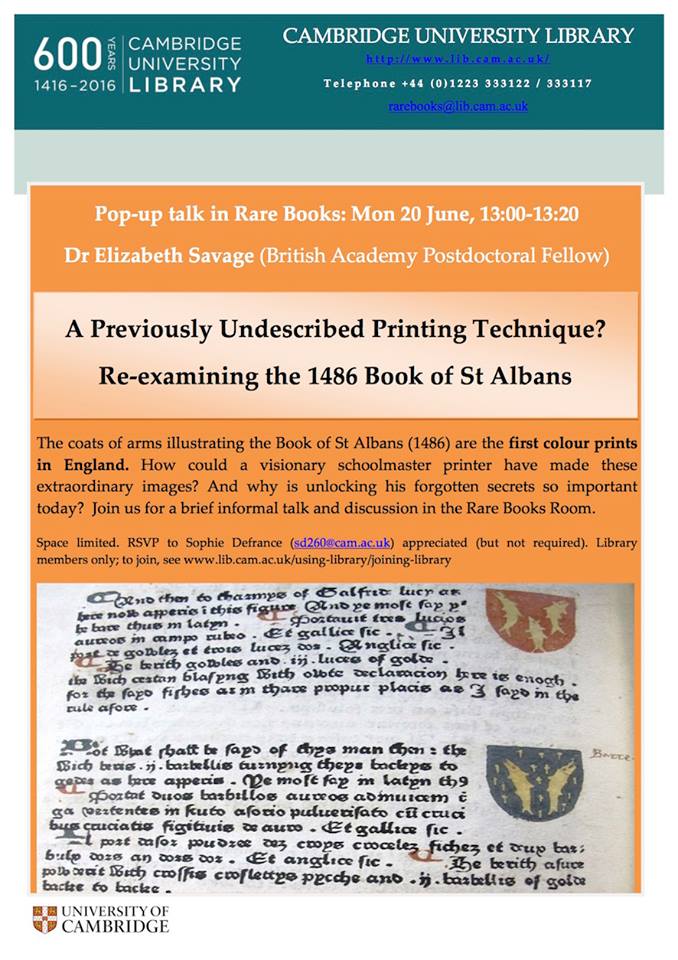