A serendipitous Riddell: discovered by chance in the UL’s manuscripts collection

Posted on 27 June 2016 by Special Collections

I have been researching the history and men of the Cambridgeshire Regiment for over twenty years now and the Library has been an invaluable source of information on the local men of the Regiment.  At the start of the First World War many of the officers were either graduates living locally; or current students, but as the War progressed and demand exceeded supply, men with no Cambridge connection were conscripted or transferred in from other regiments. 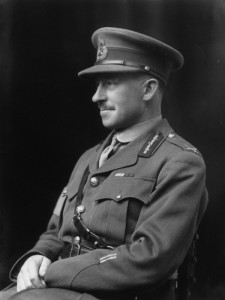 One such officer was Brigadier General Edward Pius Arthur Riddell who was a career soldier from Northumberland. He had seen active service both since 1914 and previously in the Boer War and was transferred into the Cambridgeshire Regiment on June 10, 1916. He was a very astute tactician and commanded the Regiment through several of its greatest and most trying battles before being promoted to the General Staff and higher command. For his gallantry and leadership throughout the War he was awarded the Distinguished Service Order and two bars and made a Companion of the Order of St Michael and St George. After the War, in collaboration with Colonel M.C. Clayton D.S.O. he co-authored the Regimental history: The Cambridgeshires 1914-1919 published by Bowes and Bowes in 1934 (Cam.c.934.2).

So why the blogpost? As part of my research I periodically search the internet to see what, if any, new information has surfaced about the men, especially those with no Cambridge connections, and on searching Riddell’s name I came across a blog which included a post by another member of Cambridge University Library’s staff regarding two letters held by the Manuscripts Department written by one “Edward Riddell”. The letters are interesting for a number of reasons: firstly because they are in the manuscript collection of Samuel Paget, who also doesn’t appear to have any connections to Cambridge, secondly because they are letters of condolence written about him after he was killed on the Western Front, and thirdly, because they add to my research file on General Riddell.

It turns out that Captain Samuel James Paget was Riddell’s ADC in 149th Infantry Brigade of the 50th Division. He had volunteered in 1914 and was commissioned into the 5th Norfolk Regiment arriving on the Western Front in September 1914. He was Mentioned in Despatches, later receiving a staff appointment, but was killed in action on the 25th March 1918 according to Riddell’s letter, or the 26th according to official sources, during the German Spring Offensive. He was the son of the Right Reverend Henry Luke Paget, Bishop of Chester, and Mrs Paget, both of Bishop’s House, Chester, and at the time of his death he was 22 years old.

Although both written the same day, the letters are quite different, one to a woman (Add.9948/2/7/11), and one to Paget’s father (Add.9948/2/9/12). The former, a Miss Hoare, suspected by Riddell to have been a secret love of Paget’s is told very briefly of his death with the promise to keep their relationship a secret. The latter provides Paget’s father with a little more detail of his son’s death, with the suggestion that he lost his life attempting to help a fellow officer who had been wounded, and giving an approximate location.

As Miss Hoare’s letter is in Paget’s manuscript collection, which by virtue of his death was collated by someone else, I would assume her and Paget’s relationship not to have been a secret after all but it’s pleasing to think that Riddell would keep the secret. For the researcher a hundred years later it’s ironic to think that throughout the last twenty years of my research into the men of the Cambridgeshire Regiment, these two poignant letters written by one of its most influential commanders, but who had no other links to Cambridge, were sitting in the same building as me.

Header image of members of the Cambridgeshire Regiment during WWI copyright http://www.roll-of-honour.com