Surgeons at war: the Fairbank papers

Posted on 5 July 2016 by Special Collections 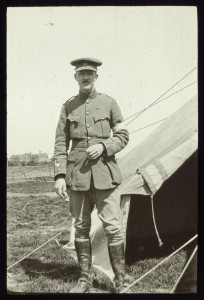 Sir (Harold Arthur) Thomas Fairbank (1876-1961) and his son Thomas John Fairbank (1912-1998) were orthopaedic surgeons and each saw service with the Royal Army Medical Corps.  Their papers, consisting principally of letters, journals and photographs relating to the service of H. A. T. Fairbank in the South African War and First World War and of T. J. Fairbank in the Second World War, have recently been catalogued.  Furthermore, the First World War diaries and photographs of H. A. T. Fairbank are now available through Cambridge Digital Library and give a vivid impression of the life of an army surgeon, first on the Western Front in 1915, including engagements in the Second Battle of Ypres and the Battle of Loos, and in Salonika from 1916 to 1918. 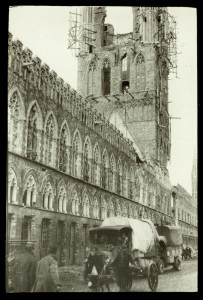 The diaries were assembled sometime after the First World War.  They contain a transcription of entries found in several contemporaneous notebooks and multiple items pasted in including photographs, pencilled sketches, hand-drawn coloured maps, printed maps, clippings from newspapers and magazines, postcards, pamphlets and circulars, French bank notes, Christmas cards, and programmes for sporting events and entertainments.

In 1915 H. A. T. Fairbank was part of the 85th Field Ambulance and served with a unit responsible for establishing and operating a number of points along the casualty evacuation chain, from the Bearer Relay Posts which were up to 600 yards behind the Regimental Aid Posts in the front line, through to taking casualties rearwards to an Advanced Dressing Station and onto the Main Dressing Station. As a captain, HATF would have been in charge of a stretcher bearer section and the diary entries record his visits to Regimental Aid Posts, treating casualties in the dressing stations and field hospital, and rescuing vehicles trapped in mud.  An entry from 26 April 1915 reveals the difficulties of dealing with heavy casualties at the Second Battle of Ypres. 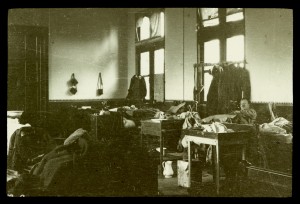 The ‘night nursery’ in a building known as the Red Asylum, Bailleul, Belgium, 1915. The building was used as a hospital by British forces from October 1914 until the evacuation of the town in April 1918. Serious cases, e.g. trephines, chest and abdominal wounds, amputations etc., were kept in one ward, which was often called ‘the nursery’ by medical and nursing staff as the casualties were all so helpless.

At the end of 1915 the 85th Field Ambulance was sent to Salonika to join a combined Franco-British force which had arrived in October 1915 at the request of the Greek Prime Minister. The objective was to help the Serbs in their fight against Bulgarian aggression but the expedition arrived too late, the Serbs having been beaten before they landed. It was decided to keep the force in place for future operations but after December 1915 there was little action except for occasional air-raids on Salonika.  Owing to the long periods of inaction the Salonika diary carries few reports of fighting or the treatment of casualties; instead there are descriptive accounts of activities undertaken during periods of rest including time for the production and performance of pantomimes.  The accompanying photograph album features the cast of Aladdin performed by the 85th Field Ambulance.

In his diaries and letters home to his parents, T. J. Fairbank provides a descriptive account of his service with the Royal Army Medical Corps in the Second World War.  He joined the 12th Field Ambulance Unit in November 1939, serving first in France near the Maginot Line and managing to escape from the German invasion of France in June 1940 in the last boat from St Malo. This was followed by a long posting in Gibraltar, where he received a correspondence course in orthopaedics from his father. He returned to France via the Normandy landings in 1944 in charge of a field surgical unit, with which he remained for the rest of the war, taking a field hospital from Normandy to the Baltic.

All of the Fairbank Papers are available for consultation in the Manuscripts Reading Room.

By Karen Davies, Archivist, Department of Manuscripts and University Archives