Posted on 7 July 2016 by Special Collections

The diaries of Siegfried Sassoon which are held in Department of Manuscripts and Archives are a unique and fascinating resource for both historians and literary scholars. Of particular interest are his diary entries as an eyewitness of the first day of the Battle of the Somme.

Sassoon was a Lieutenant in the 1st Battalion, Royal Welch Fusiliers, who were in reserve that day. His company was employed on carrying duties, so he was free to observe the attack from a position called Crawley Ridge, on high ground behind the British lines. Sassoon meticulously noted the times at which he made his diary entries throughout the day, which allowed us to broadcast them via Twitter in real time throughout the 1st July 2016, exactly 100 years after they were written. 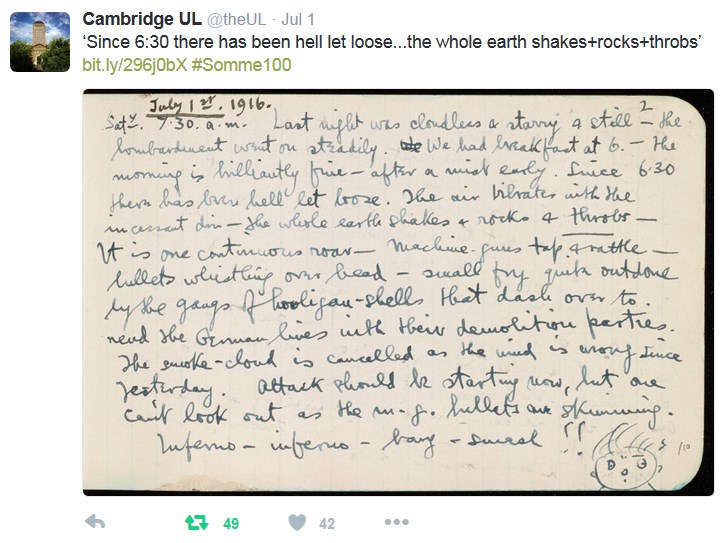 See all the tweets on Storify.

The map on fol. 2r of his journal shows the area, oriented to the north. Sassoon’s map only shows the German trenches. The cemetery is south-west of Fricourt village and the British front line ran just to the right of it, past the bottom left hand corner of the square on Sassoon’s map, and then continued eastwards. Sassoon was watching from near the bottom of the page, about 500 yards behind the front line. The crossroads at the top centre was known as Wing Corner and a German machine gun positioned there caused an enormous number of casualties on the day.

Fricourt village was not to be attacked directly at the start of the day, but ‘pinched out’ from the east and west. Therefore its defenders, in one of the most heavily fortified positions in the line, were free to fire on the flank attacks.

The attack Sassoon describes initially, with men “cheering as if at a football match”, was made by the 10th West Yorkshires, away to his left. The artillery battery which should have dealt with the German machine gun at Wing Corner had shell fuse problems and its fire was ineffective. Although there was some initial success, the West Yorkshires suffered 710 casualties out of the 741 attackers, the highest casualty rate suffered by British troops on the first day of the battle. The vast majority of these casualties were killed.

The 7th Green Howards were due to occupy Fricourt later in the day but, through a misunderstanding, one company of 140 men attacked at 8.20 am, suffering 108 casualties.

At 2.30, the 7th East Yorkshires attacked the same position, suffering 123 casualties in three minutes. The artillery had now solved their problem, but could not fire for fear of hitting the East Yorkshires, particularly their wounded, many of whom were almost on top of the enemy position, so the German machine gun remained in action. This was possibly the “lively machine gun fire on the far side of the hill“.

At the same time, Sassoon saw the 20th Manchesters move off, expecting to occupy Fricourt which should by then have been captured. The Manchesters managed to hold on to the German front line at the end of the day, having advanced 150 yards.

The Germans retired from Fricourt overnight.

The first day of the Somme remains the single bloodiest day in the history of the British Army. Sassoon’s account is accessible, along with many of his other journals, via the Cambridge Digital Library.

We are grateful to the Trustees of G. T. Sassoon Deceased for permission to publish the images of Siegfried Sassoon’s diaries.