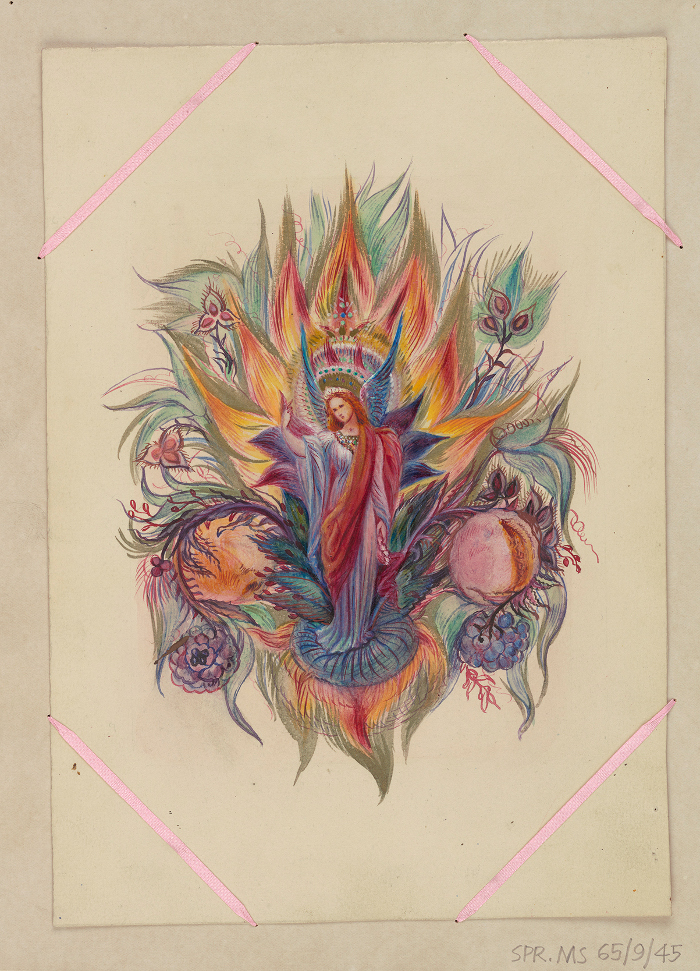 The latter half of the nineteenth century saw a rise in interest in Spiritualism, the belief that the spirits of the dead can, and indeed actively try to, contact the living.  This supposed contact, usually through spirit mediums at séances, took on a number of different forms, such as table rapping, automatic writing, utilising a medium’s voice or, very occasionally, full form spirit materialisation.  One manifestation of this contact was so-called spirit drawing whereby the hand of a medium, sometimes in a state of trance, would be guided by the spirit of a dead artist to produce often dream-like images.

Anna Mary Howitt was one such medium.  Born in 1824 into a Quaker family with connections in the literary and artistic world, she became an accomplished artist, attending the Henry Sass Art School in London with Dante Gabriel Rossetti and others of the Pre-Raphaelite school.  In 1857 one of Howitt’s paintings was rejected by the Royal Academy and when the art critic John Ruskin also wrote a letter criticising the picture it proved too much for Howitt and she appears to have suffered some kind of a nervous breakdown. By this time her parents had become interested in spiritualism, her father, William Howitt, would become one of the leading spiritualist journalists in the 1860s, and Anna Mary followed them in embracing spiritualist beliefs.  She destroyed her previous paintings and from then on began producing elaborate and complex spirit drawings whilst in a trance-like state.  These images would be among the first spirit drawings to reach a wider public, some of them being published in the Camilla Crosland’s 1857 book on spiritualism Light in the Valley.

The Manuscripts department hold a collection of Howitt’s drawings and paintings as part of the Society for Psychical Research archive.  There is a catalogue of the collection on the Janus website. It is reference MS SPR.65.

This painting has featured in the catalogue for an exhibition of the spirit drawings of Georgina Houghton which is currently on at the Courtauld Institute.