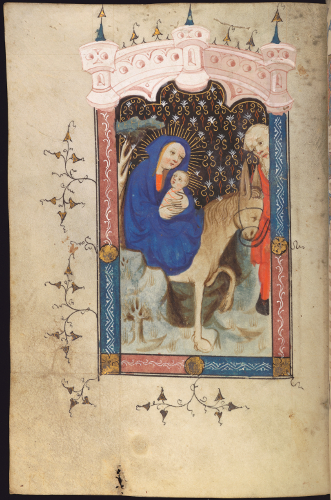 Within its holdings of well over 450 illuminated manuscripts, Cambridge University Library possesses some 45 Books of Hours.  As books designed for personal use within the late medieval programme of devotions, and at the set ‘canonical hours’ of the day, they share certain basic characteristics and contain core texts that mirrored official service-books used in church liturgy.  Open several Books of Hours, however, and one quickly appreciates the variety (and often highly personal nature) of added prayers, suffrages to patron saints, or records of family birthdays or bereavements found within their covers.  Books of Hours’ visual appearance is also strikingly diverse: their leaves could be crammed with full-page miniatures, elaborate borders, historiated and other decorated initials and line-fillers, reflecting the taste of their owners and the artistic fashions of the day.  Some at the UL are exquisitely decorated, their illuminations still gleaming on the page; others have fared less well, and have been heavily used, rubbed and scuffed, or even mutilated over the centuries.

At present, three of the UL’s Books of Hours have been digitised and are available to view in full on the Cambridge Digital Library – MSS Dd.4.17, Ff.6.8 and Ii.6.2 – complete with descriptions of their physical characteristics and contents.  We will soon supplement these with further examples!  There is certainly plenty from which to choose.  There are Books of Hours from across the Continent: the majority from France (14), Flanders (11) and England (10), with a handful from Italy (6) and the Northern Netherlands (4). 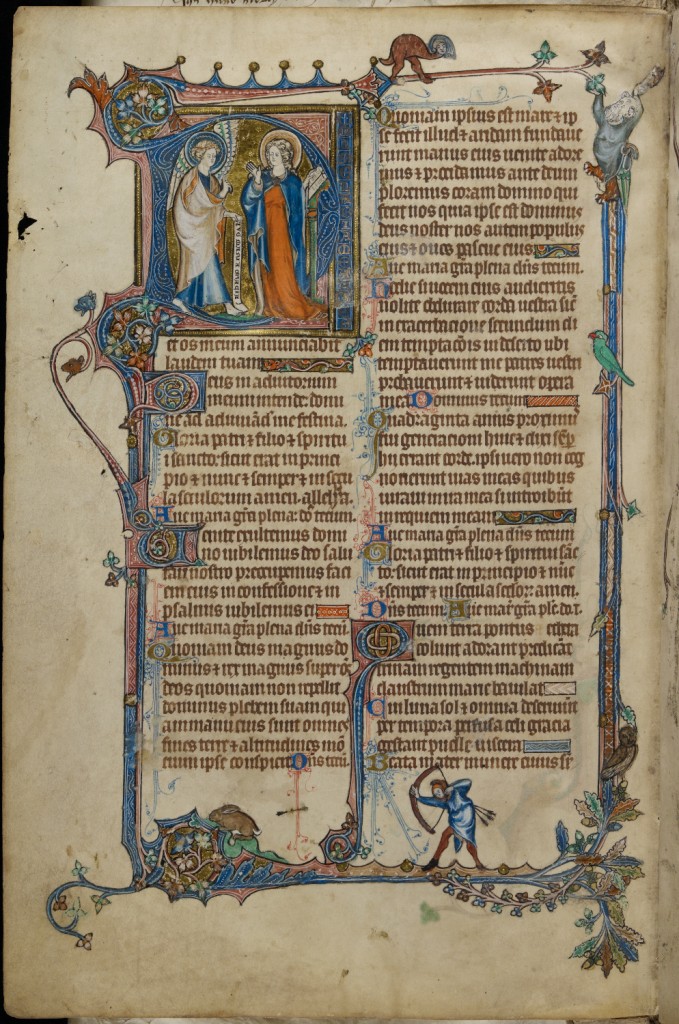 The two earliest examples are both English-made: MS Dd.4.17, from the first quarter of the fourteenth century (and not after 1423); and MS Dd.8.2, a fragmentary copy that in part (ff. 21-38) was assembled in the Midlands around the beginning of the century.  Two-thirds of the total collection, however, dates to the fifteenth century, and the majority of those are from the latter half of the period, reflecting the burgeoning manufacture and trade in these books and their consumption by growing numbers of laypeople.  That Books of Hours were among the first genre of text to be printed suggests the early printers recognised a healthy market demand and a viable commercial opportunity, especially among those readers for whom a manuscript was beyond their modest budgets. 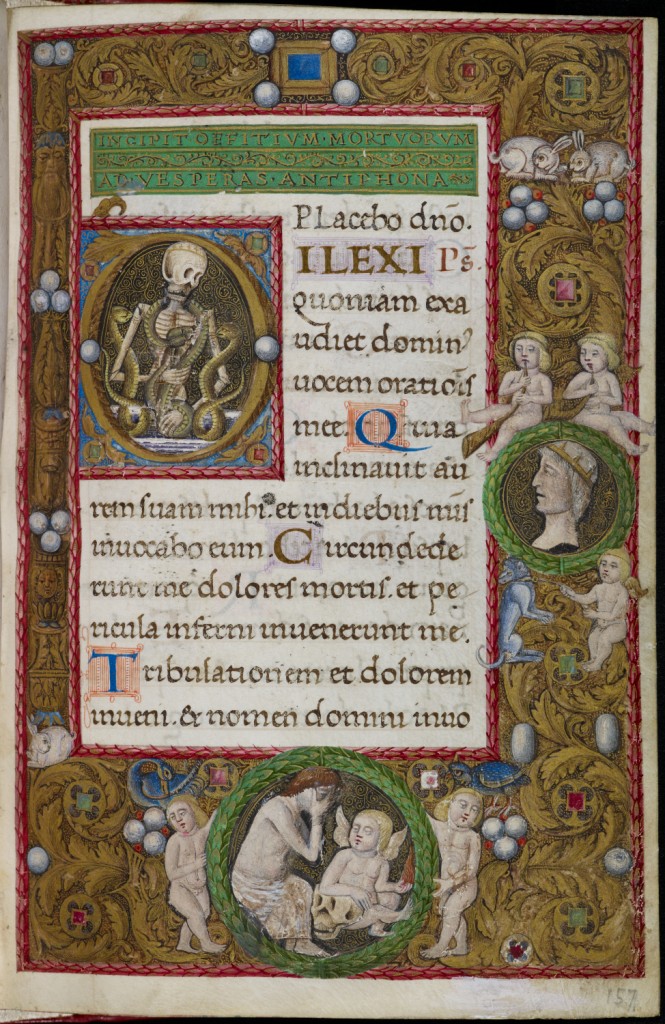 The Office of the Dead, with historiated initial depicting a skeleton entwined with serpents and a four-sided gold acanthus and jewel border with animals, putti and mourning figure (Italy, Naples, 1484-92), MS Add. 4105, f. 157r

There are real treasures among the University Library’s Books of Hours.  Many are beautifully illuminated and art-historical research has enabled the identification of the artists responsible.  For instance, the illumination and decoration in MS Add. 4105 has been ascribed to Cristoforo Majorana, who was active in Naples between 1480 and 1492; since a prayer refers to Pope Innocent VIII, the manuscript must have been made between 1484 and 1492. 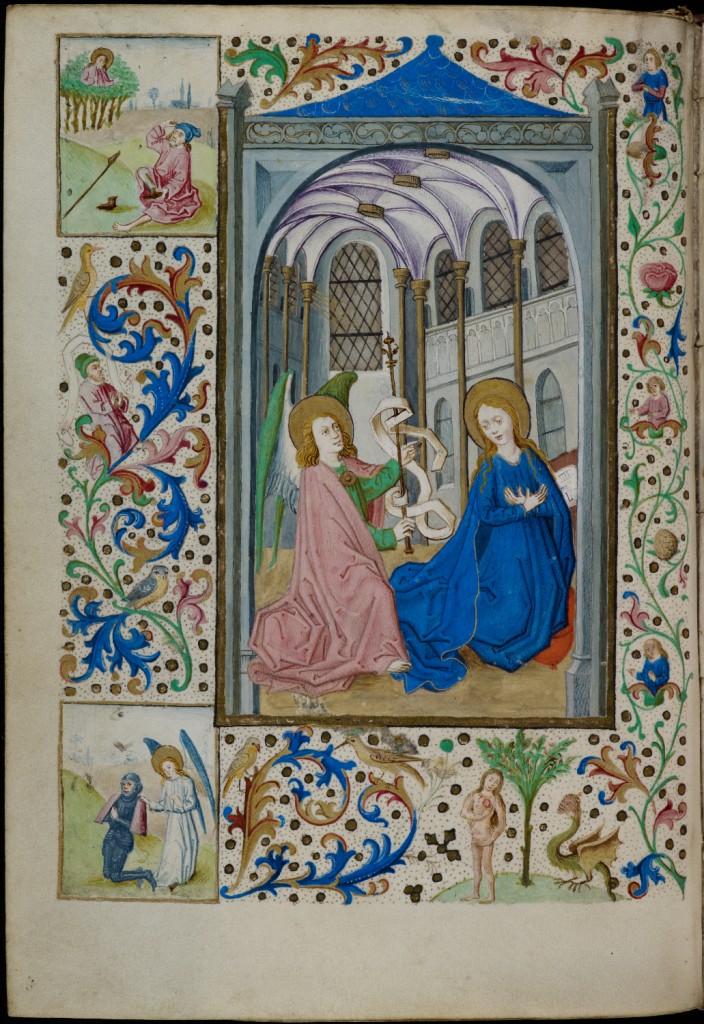 Full-page miniature of the Annunciation, with four-sided foliate border containing small miniatures of Moses and the Burning Bush, the Miracle of Gideon and the Temptation of Eve (N. Netherlands, Zwolle, probably c. 1470), MS Add. 4103, f. 17v

In numerous instances, association with other surviving manuscripts or artistic groups is possible.  MS Add. 4086 was illuminated by artists in the circle responsible for Abbot Lytlington’s monumental missal at Westminster Abbey in 1383-84, while a Book of Hours in Dutch (MS Add. 4103) is considered to be one of the finest manuscripts illuminated by a group of artists known as the Masters of the Zwolle Bible, probably for a layman and his wife, who are depicted together. 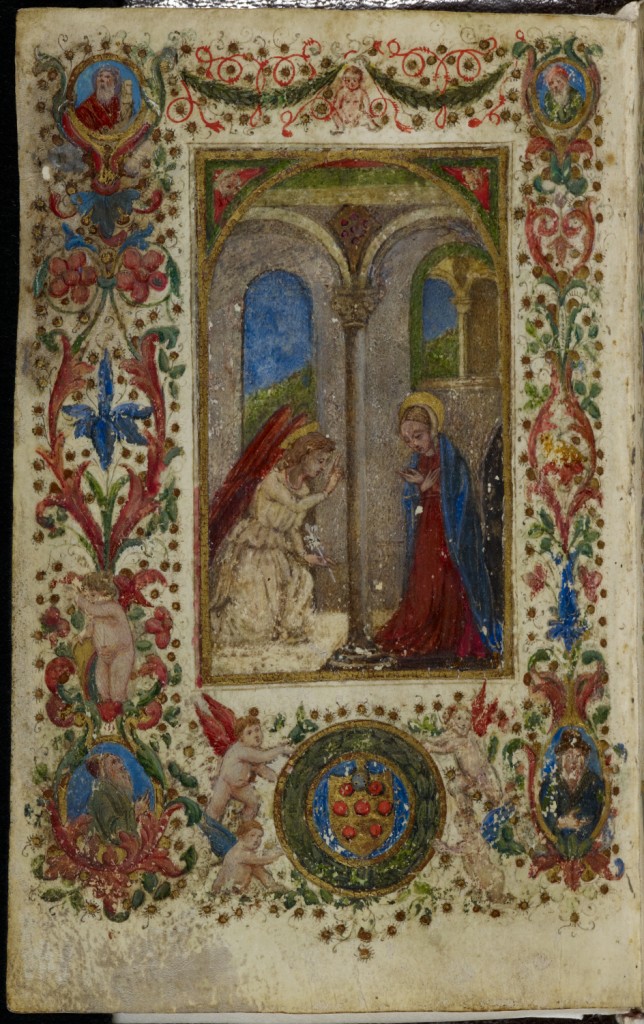 Some intriguing provenances are also to be found.  Two Books of Hours were owned by prominent members of the de Medici family of Florence: MSS Add 4101 by Lorenzo de Medici (b. 1449, d. 1492); MS Add. 4112 by Queen Marie de Medici (b. 1575, d. 1642). There are also numerous copies designed for female readers, including one that contains text in Castilian for Beatrice of Aragon, Queen of Hungary.  It was brought back from Gran in Hungary by Catalan nobleman Antonia de Cardona in 1500, and an inscription records that in 1573 it was inspected by the Spanish Inquisition.

Forthcoming blog posts will look in more detail at the texts that Books of Hours contained, their owners and readers, and examples that have been digitised and published on the Cambridge Digital Library.