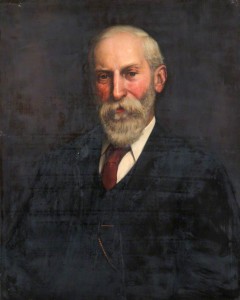 The Royal Commonwealth Society collections have just added an on-line catalogue entry for a fascinating series of letters written from Civil War America by Edward Stanley (1839-1925), fourth Baron Stanley of Alderley. Stanley made an extensive tour during 1864 immediately after completing his studies at Oxford and before being called to the Bar in 1865.  He was very interested in examining the causes and course of the conflict from both the Union and Confederate perspectives, and secured introductions to leading political, military, social and intellectual figures through his father, who was a cabinet minister in Lord Palmerston’s government. Stanley prepared for his visit, assiduously recorded his observations and became a shrewder interpreter as he developed knowledge and confidence. About a month after his arrival, Stanley wrote, ‘‘I find my pervious study of American matters enables me to derive far greater benefit from my visit… I am able to learn a great deal & it is surprising how valuable I find even the little personal observation I have already made of the country, towards correcting & modifying my previous impressions. I write everything down in my letters that comes uppermost at the moment… I write to reproduce the lights and shadows here just as they strike me’ (14 Apr. 1864). 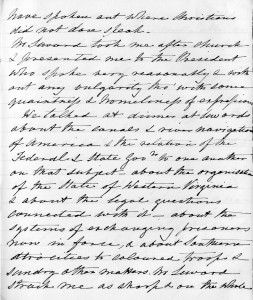 Stanley spent much time in New York and Washington, and had several interviews with Secretary of State William Seward, whom he described as ‘rather shrewd than really able or wide in his views, & prone to be cautious & technical instead of statesmanlike in his way of handling great questions’ (17 Apr. 1864). Seward introduced him to Abraham Lincoln, with whom Stanley dined, and the aristocratic young Englishman’s impressions of the humbly born President are recorded in the facing letter.  Stanley was the guest of General George Meade during a visit to the Army of the Potomac, where they discussed the Battle of Gettysburg, and he also dined with General Ulysses S. Grant, who was ‘very modest & unassuming in manner, very homely, he gave me the impression of a Western farmer but what he said was sensible, & to the point. He evidently had a character and a will of his own’ (26 Apr. 1864). Stanley visited the battlefields of Gettysburg and Vicksburg, a camp for black troops at Arlington Heights, Confederate prisoners of war at Fort McHenry, and a large military hospital outside Philadelphia. 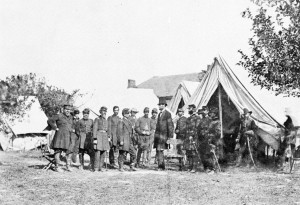 Stanley reported at length upon conversations revealing Northern wartime opinion, and was particularly interested in the violent Anti-Draft Riots that convulsed New York City in 1863, and the views of the Copperheads (anti-war Democrats). He attempted to diffuse hostility towards Britain caused by its recognition of the South’s status as a belligerent.  Stanley also had introductions to a galaxy of American literary figures.  He had several discussions with Horace Greeley, editor of the ‘New York Tribune’, who seemed ‘to feel more deeply than most the issues involved in this war, & to be more earnest than many in his principles’ (1 Apr. 1864). He dined at the home of Henry Wadsworth Longfellow, ‘who talked about poetry and the Hexameter for English verse’ and had several meetings with Ralph Waldo Emerson, a strong opponent of slavery: ‘He told me that he had heard from England of my having written letters that defended their cause.’ They discussed the abolitionist John Brown, ‘whom Emerson had seen & whose speech after conviction he spoke of with great admiration as one of the finest, simplest, most natural things he had ever read’ (16 Sept. 1864). 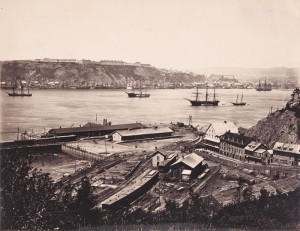 Stanley (a firm abolitionist himself) was able to gauge Southern opinion during visits to Baltimore, whose society had been bitterly divided by the war, ‘Intimate friends now do not speak – even brothers and sisters are at daggers drawn’, and during a lengthy stay in Louisiana (10 Apr. 1864). Keen to observe slavery and the plantation system first hand, he stayed overnight at a sugar plantation near New Orleans, where conditions were said to have changed little since Emancipation, despite the fact that its former slaves now worked for wages.  Stanley was appalled by what he saw, ‘it seemed as if life & energy, almost humanity, had been crushed out of the people’ (9 June 1864). Travel by railway and steamship gave him the opportunity to hear the views of more ordinary Americans, in contrast to the elevated circles he had occupied earlier, as in a journey from Nashville to Louisville in the baggage car of a military train for the wounded. Stanley’s letters reveal a keen interest in American education, and he visited many public, charitable and Negro schools, anticipating his future career as an educationalist and member of the London school board between 1876 and 1904. Finally, Stanley’s travels also took him briefly to the province of Canada, where plans for the federation of British North America were gathering pace, in part in response to tensions created by the Civil War. In Quebec he met the Attorney General George-Étienne Cartier, who played a critical role in the Confederation of Canada in 1867.

Please follow this link to view the Janus catalogue of the Letters of Edward Lyulph Stanley, RCMS 232.