A Choirbook fit for a King?

Posted on 4 October 2016 by James Freeman

Today saw the beginning of our series of show-and-tell events, ‘Treasures of the University Library’,

with talks given by Anna Pensaert, Head of Music Collections.

(For further information about forthcoming talks, go to 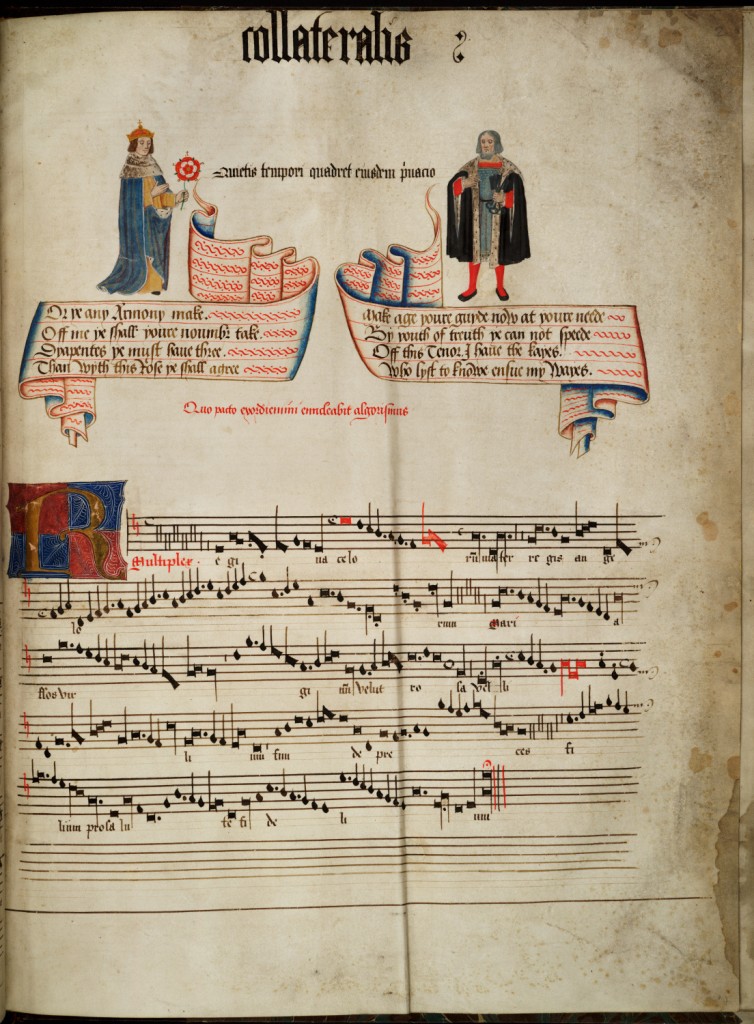 Amongst the medieval music manuscript holdings at Cambridge University Library is a beautiful example of an early 16th-century English choirbook, MS Nn.6.46.  Its large format enables several singers to stand around a lectern in order to perform the music during religious services.  The music is written in a very clear black and red mensural notation, a system capable of ‘measuring’ precise rhythmic values as was required for the polyphonic music of the time where, in contrast to plainchant, several voices sang different parts. The manuscript text is decorated with gold initials, on red and blue (sometimes chequered) backgrounds, with white filigree ornamentation. 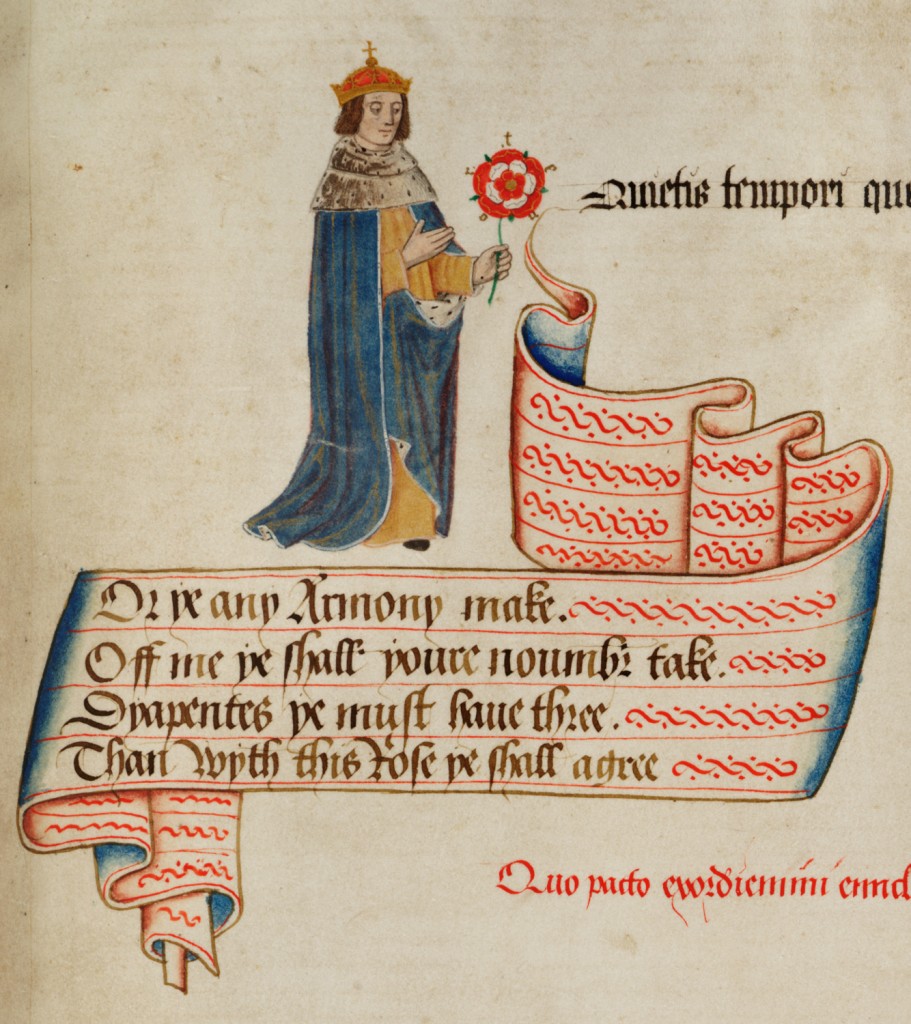 The second folio contains a significant miniature of a king holding a red and white Tudor rose and a gentleman in ermine dress holding three keys, that may be by the same hand as the introductory miniature of British Library, Royal MS 2 A XIX, a manuscript mass from the Royal Library.  It is therefore possible that our choirbook could have been produced around 1500 for the court of Henry VII.

A slightly later date of production is suggested by a theory – which has generally not been accepted by scholars – concerning the identity of the composer.  He appears to have left a puzzle, as yet unsolved, about his name: ‘Hoc fecit matres(?) maris’.  Thurston Dart and Roger Bray have suggested that it could refer to a certain John Lloyd, possibly a university graduate with links to the court of Henry VIII: ‘matres’ being an anagram for ‘master’ and ‘maris’ (meaning ‘of the sea’ in Latin) alluding to ‘flood’, a homophone of ‘Flud’ and by extension ‘Lloyd’.

The origins and provenance of MS Nn.6.46 remain otherwise shrouded in mystery.  Even the music itself provides us with a riddle, albeit a deliberate one, to which the musician has to find the answer in order to be able to perform the music.  It was not uncommon in Renaissance polyphony for the composer to include such intellectual challenges and puzzles and this manuscript has proved to be quite a hard one to crack. 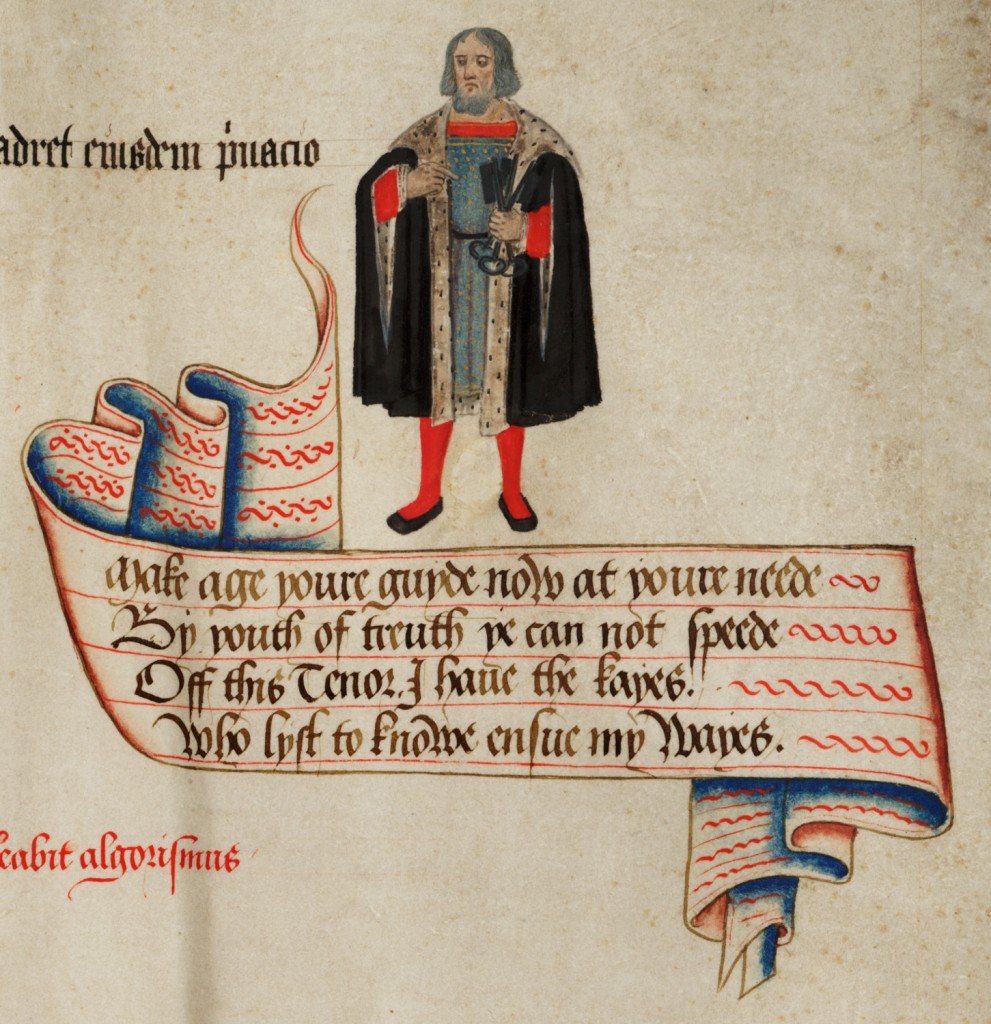 Let’s look at some of the clues, which can be found in the illustrations and the text.  The king in the image above holds a Tudor rose with five petals, spelling out the word “tenor” and it is precisely in the tenor that we encounter notated music that will simply not fit with the other voices.  Another hint is provided by the man depicted on the right hand side, possibly the composer, who is carrying three keys.  The text in the scrolls underneath the image tells us that: “Off this Tenor I have the kayes, Who lyst to knowe ensue my Wayes”.

Additional clues are given in the Latin text on folio 1v and throughout the manuscript at each ‘encrypted’ musical section.  The use of red and black notes, their lengths and possible binary and ternary patterns all contribute to the difficulty of the puzzle and its solution.  Once we have cracked the code we can see that the choirbook contains a votive antiphon for three voices ‘Ave Regina C[a]elorum’ (solved by Thurston Dart in 1955), as well as the five-part mass ‘O quam suavis’ (transcribed and published by H.B. Collins in 1927 with a detailed explanation and introduction).  The complexity of the puzzles indicates that the manuscript’s main function would have been as an aide-memoire to support performance of a piece that had already been studied in detail and was well known to the singers. 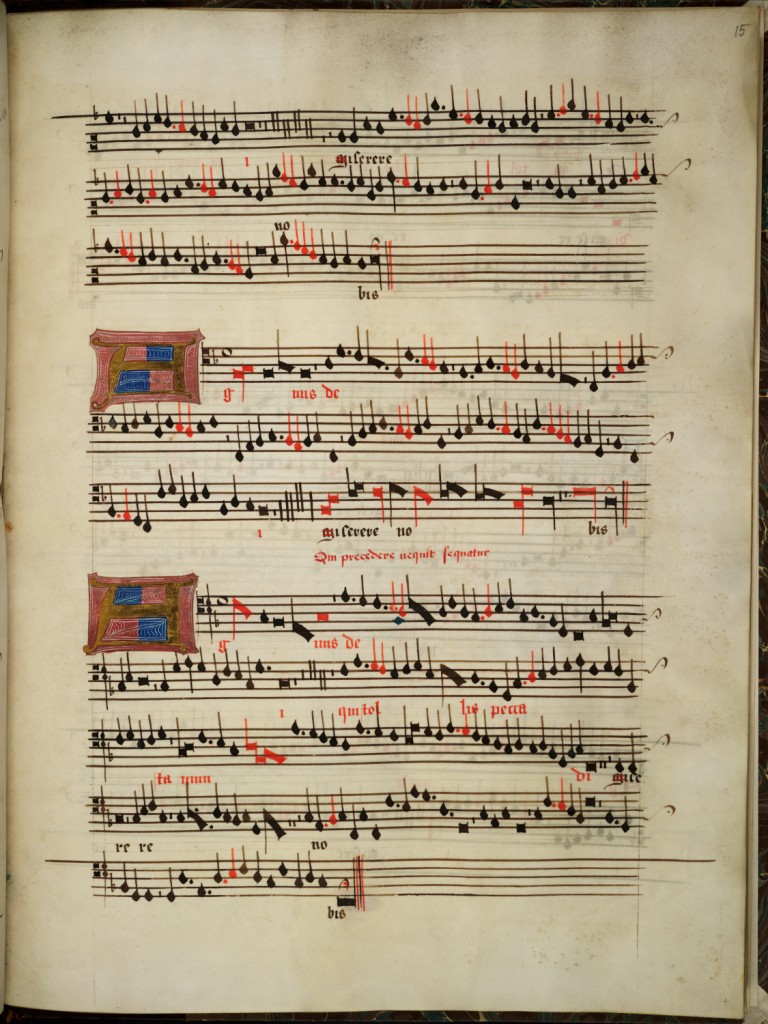 An example of a puzzle in the manuscript: “Qui precedere nequit sequitur”, relating to ‘Miserere nobis’ in the tenor part; MS Nn.6.46, f. 15r

MS Nn.6.46 is significant as the only existing source material for these particular musical settings.  It is a valuable source for the study of English polyphonic mass settings and is a witness to the existence of a vibrant and intellectually sophisticated musical culture in the decades immediately preceding the Reformation.  It continues to excite scholarly interest and fulfils an important function in teaching at the University.  Dr Edward Wickham, Affiliated Lecturer at the Faculty of Music has described it as “one of the most impressive music manuscripts in the collection, [which] provides the grand finale to my lecture on Renaissance sources at the UL.  The source gives students a wonderful sense of musical culture as an amalgam of the visual, the tactile, the intellectual and the aural.”