Views of the Beagle Expedition

Posted on 6 October 2016 by James Freeman

The second of our ‘Treasures of the University Library’ talks was given by Alison Pearn, Associate Director of the Darwin Correspondence Project:

Within months of graduating from Cambridge, Charles Darwin set out on the great adventure of a five-year voyage round the world on an admiralty surveying vessel, HMS Beagle.  A sort of extended gap year, the voyage was one of the most important events of Darwin’s life.  Two small sketchbooks, rarely seen in public, show in remarkable detail the sights of South America and the Pacific islands exactly as Darwin saw them, bringing to life his own accounts in his letters and notebooks.

Double-page panorama sketched by Conrad Martens, of HMS Beagle in the bay and the coastal settlement of Valparaiso, with colouring instructions written above; dated 17th August 1834, MS Add. 7984, ff. 35v-36r

The sketches, mostly executed quickly in pencil, but a few in vivid watercolour, were made by Darwin’s shipboard companion, the artist Conrad Martens (1801–1878), the London-born son of an Austrian diplomat.  Martens joined the Beagle in autumn 1833, nearly two years into the voyage, but, both before and after, he travelled and drew scenes along the same route followed by Darwin.  He was paid by the captain, Robert FitzRoy, to record the landscapes explored by the ship’s crew, and the sketches were part of the record of their scientific mission to map the coastline and waterways of South America.  Many of the sketches bear FitzRoy’s initials showing that he had approved them. 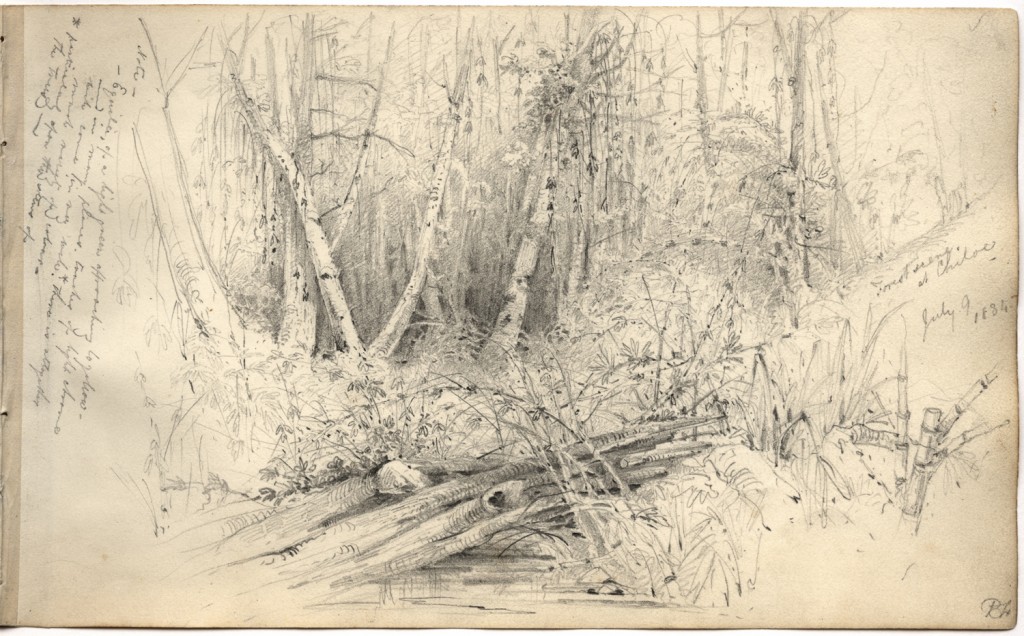 Although tiny, measuring only about 14 x 22 cm, they nevertheless capture and bring alive scenes as varied as a wagon train outside the crumbling walls of Monte Video, the dense tangle of Chilean forest, the airy elegance of palm trees in Tahiti, the sight of a distant volcano, boisterous sailors, an almost aerial view of Valparaiso, and the luxury of a siesta on a balcony. 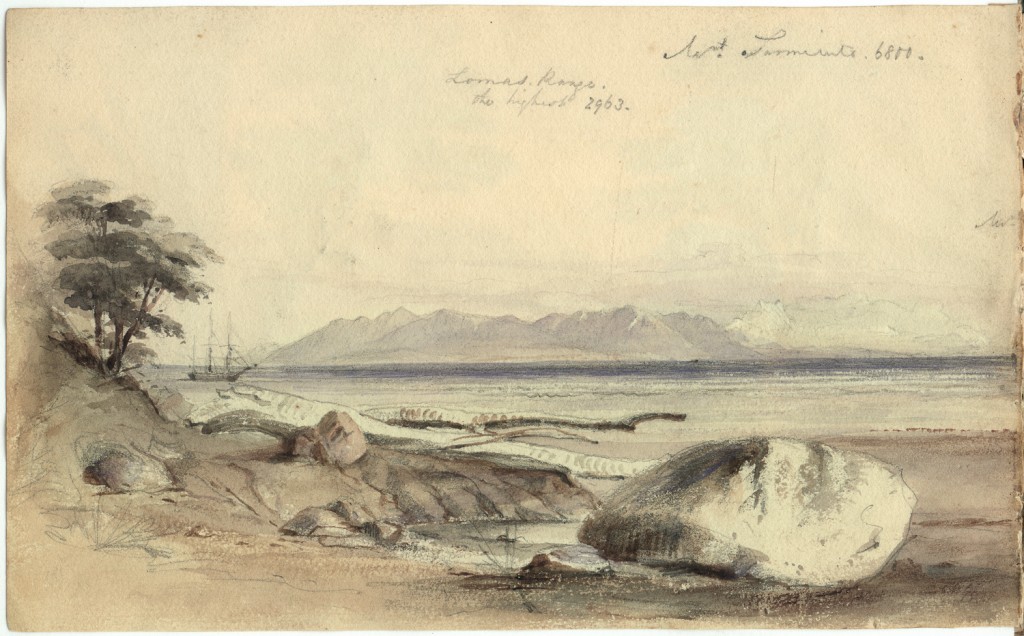 The sketchbooks, originally given by Martens to one of his pupils, came to the Library in 1977. They are books I and III of four still known to exist and show scenes from Martens’ arrival in Rio de Janeiro, through Monte Video where he first came on board, to his departure from the ship at Valparaiso, Chile, in August 1834.  From there, Martens travelled to Tahiti and then to Australia on much the same route as the Beagle followed a year later. 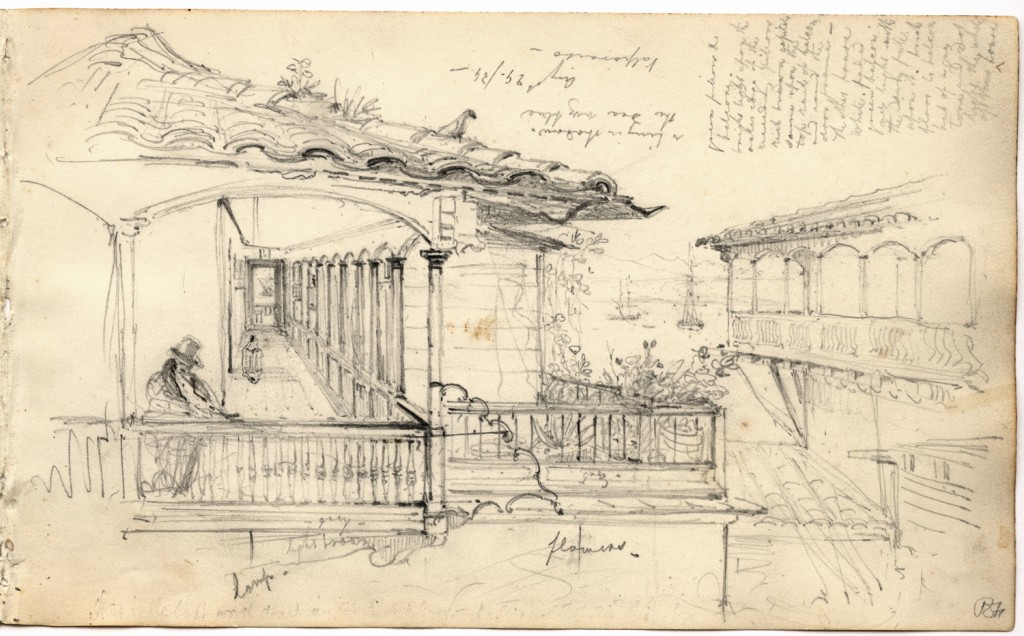 FitzRoy described Martens to Darwin as ‘a gentlemanlike, well informed man’ but, though he thought Martens’ landscapes ‘really good’, he didn’t rate his drawing of human figures.  FitzRoy thought Darwin would like Martens and he was right.  Writing to his sisters, Darwin described the artist – ‘our little painter’ as ‘a pleasant person…full up to the mouth with enthusiasm’, and was sorry to lose him when the mounting cost of the voyage forced FitzRoy to let him go.  They looked Martens up when the Beagle arrived in Sydney, and Darwin bought two watercolours from him, one of the Santa Cruz river and one of the Beagle in Tierra del Fuego which still belongs to the Darwin family. 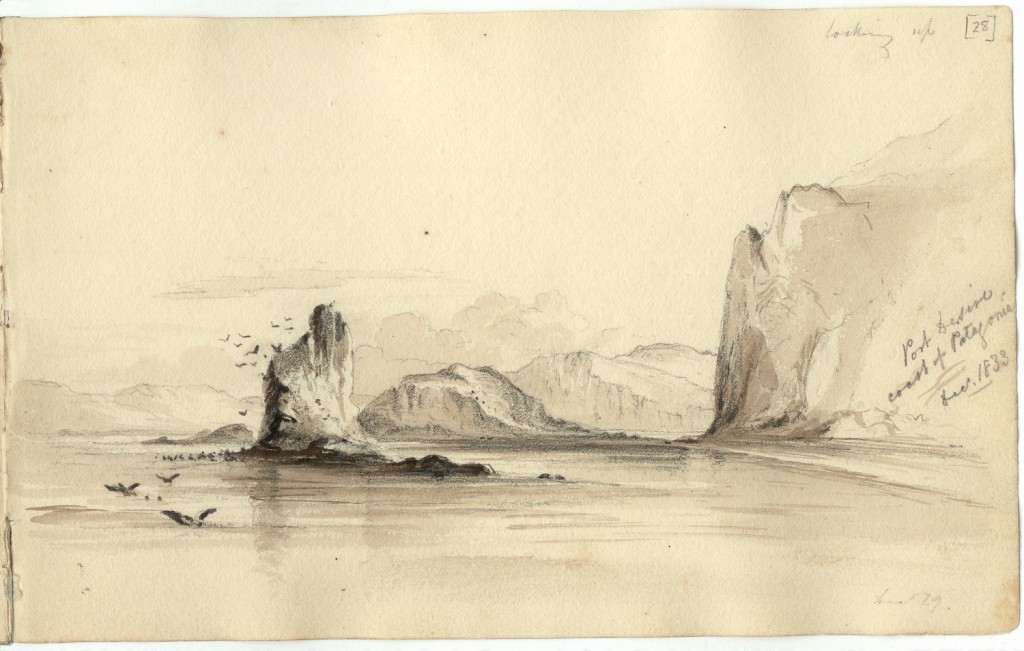 The two men exchanged letters years later.  Martens, not wanting to think of himself, he said, as having ‘an origin in common with toads and tadpoles’, hadn’t read On the Origin of Species, however they clearly remembered one another warmly, with Martens regretfully supposing Darwin would no longer ‘laugh at nonsense’ as he had when they were young men together on the Beagle.