Our eighth and final ‘Treasures of the University Library’ talk was given by Dr Emily Dourish, Deputy Head of Rare Books:

The Gutenberg Bible is recognised as the first major work printed in the West using movable type; it is widely regarded as the book that began the print revolution in Europe.  Cambridge University Library possesses a copy of this precious book, at shelfmark Inc.1.A.1.1[3761.1-2].  The book does not bear the familiar hallmarks of a modern printed book: there is no title page, and neither the name of the publisher nor the date of imprint are given.  All such information about its production has been established by scholars using other historical evidence, and by comparison with other printed books from the period.  It is generally agreed that it was produced at Mainz, around 1455, by the printer Johann Gutenberg, his assistant Peter Schoeffer, and with the financial backing of Johann Fust (at the outset of the project at least). 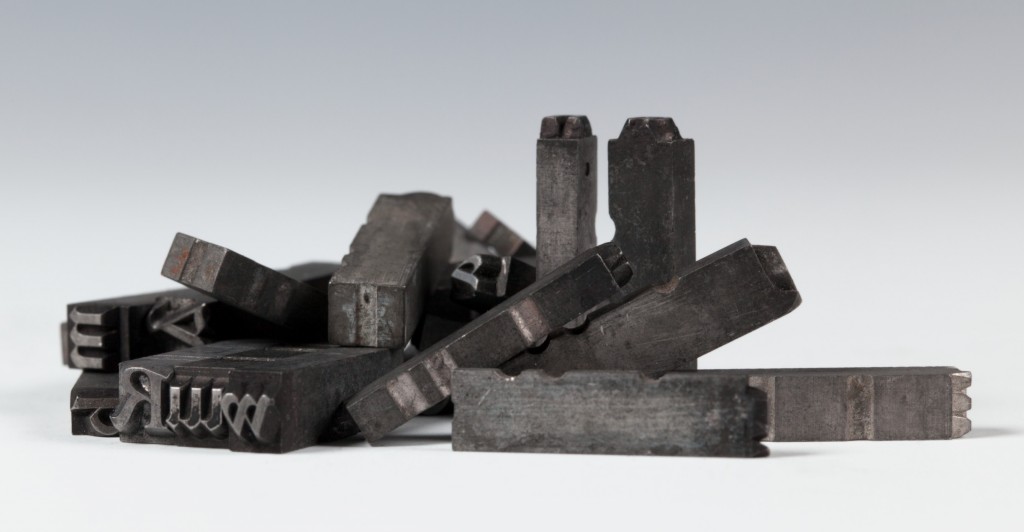 The Bible was printed using a wooden press, paper created from a pulp of linen rags, and individually cast metal letters. The procedure can be seen in detail in this film, made in the University Library’s own Historical Printing Room:

The book was designed with a similar layout and style of lettering to manuscripts written in Germany at the time; there was no other artistic model to follow.  It was produced with 42 lines of text to each page (hence its alternative name, the ‘42-line Bible’).  Scholars believe that around 180 copies were produced, of which about 45 were printed on parchment.  It has been calculated that around 16,000 individual pieces of type were required, nearly 50,000 sheets of paper, and some three years in total to complete them. 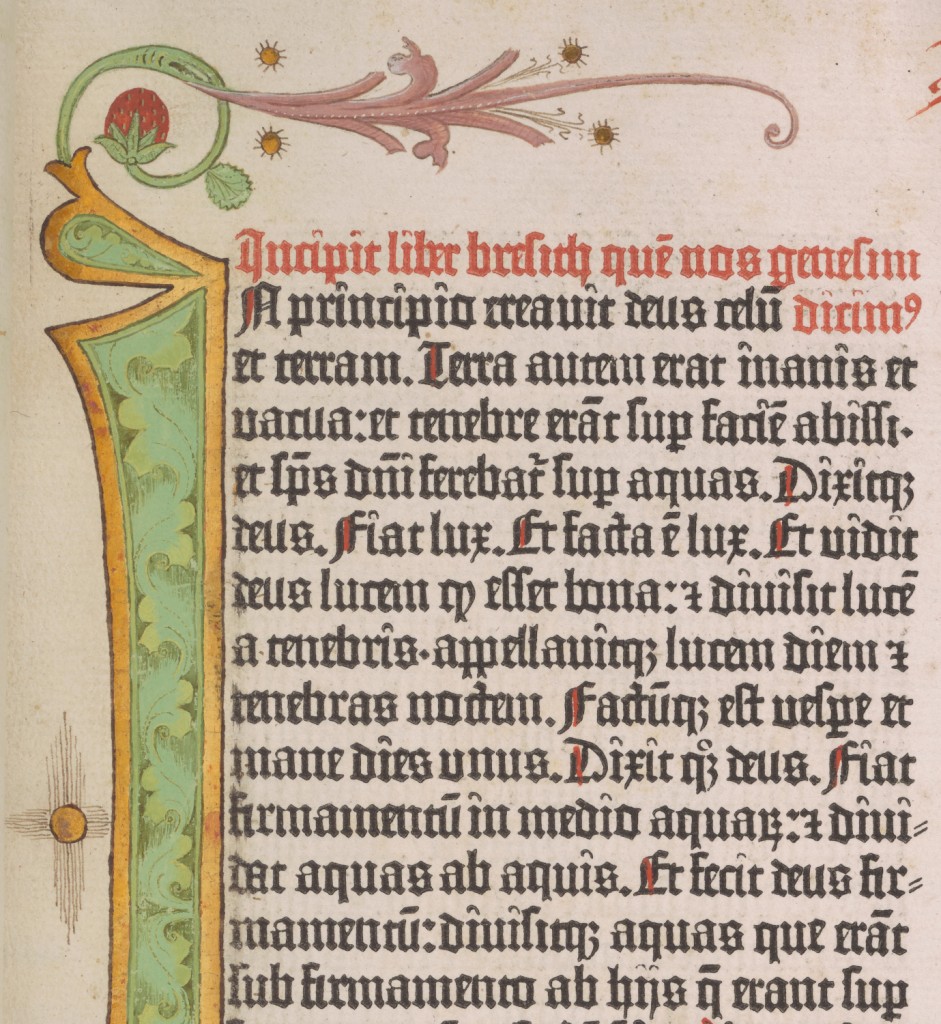 The text of the Bible was printed in black ink.  In the early stages of the project, the openings of the component books of the Bible were highlighted with text printed in red.  However, it was soon decided that this was too time-consuming, so Gutenberg switched to printing only the main text and left blank space for the initials and headings; the purchaser could then have these completed as they wished, at their own expense.  In the copy at Cambridge University Library, the initials and running titles have been completed by hand in red and blue, with the openings of each of the books of the Bible ornamented with highly decorative lettering that uses gold leaf.  The illustration above shows clearly the very regular lettering of the red-printed Incipit text, and the different shade of red used later by the manuscript artist as he highlighted the opening letters of the sentences. 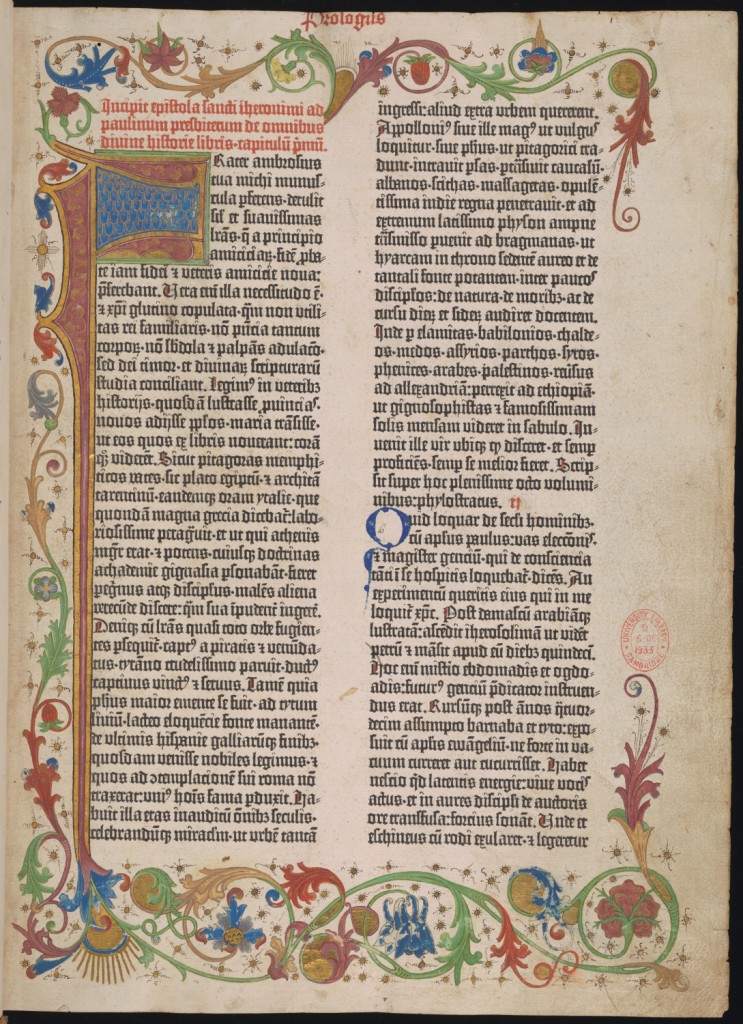 The original sale price of a Gutenberg Bible is unknown, but some early evidence suggests that one copy sold for 30 florins – around three years’ wages for a clerk.  Only 21 complete copies survive, with a further 27 fragmentary copies in collections around the world.  Cambridge University Library acquired this copy only in 1933, as part of what was described by the chairman of the Library Syndicate as ‘probably the most valuable benefaction that has been received from any private individual in the long course of our Library’s history’. 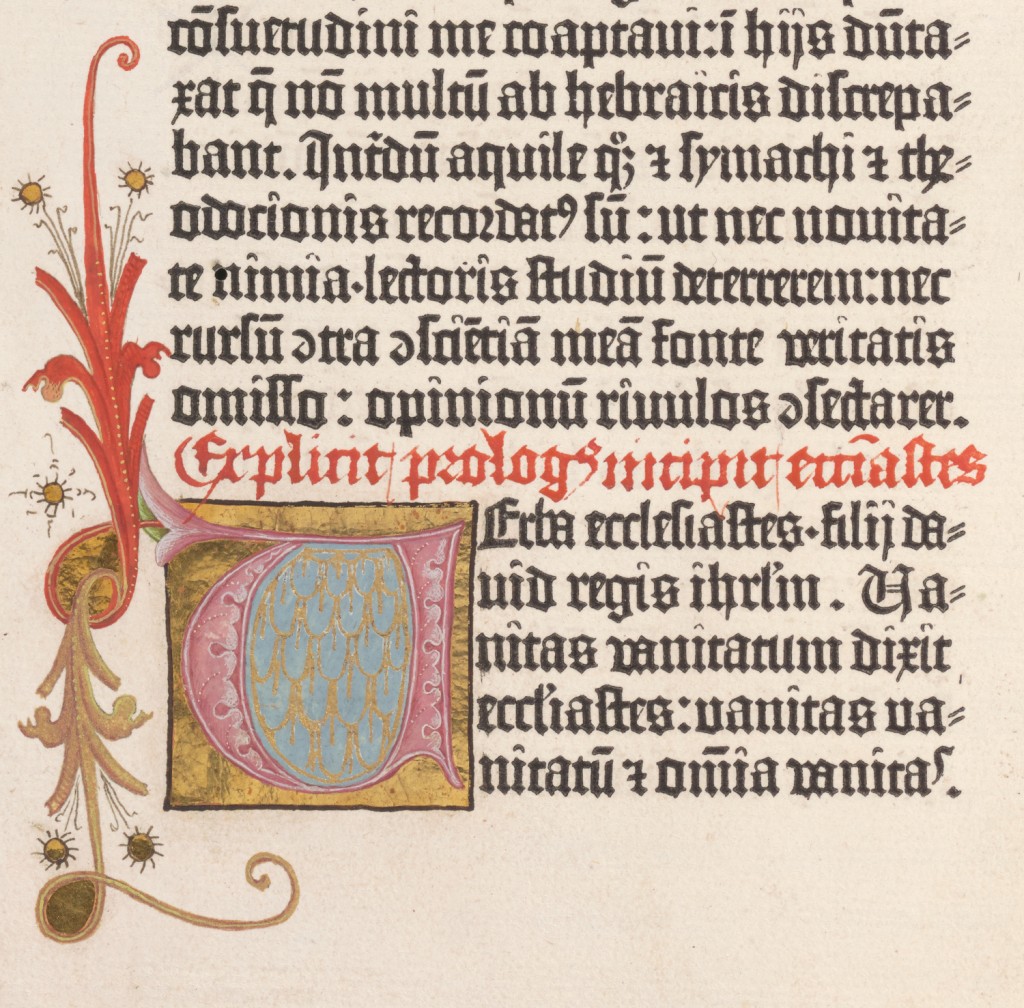 It was a gift from the barrister and Trinity College alumnus Arthur Young.  At some point in its history, it had belonged to the Jesuit College of Strasbourg, and was purchased in the early 18th century by the first Earl of Hopetoun.  In 1889, his descendant the seventh Earl sold off the collection prior to his emigration to Australia.  The early eighteenth-century binding names it only as ‘BIBLIA LATINA EDIT. ANTIQ.’, an old edition of the Latin Bible, and it had presumably sat unremarked on the library shelves for many years.  By comparing the type and paper used, scholars and bibliographers over the last 150 years have been able to identify many early, anonymous printed works.  It was only thanks to the keen eye of the auctioneer who assessed Hopetoun’s library that this book was identified as a product of Gutenberg’s press. 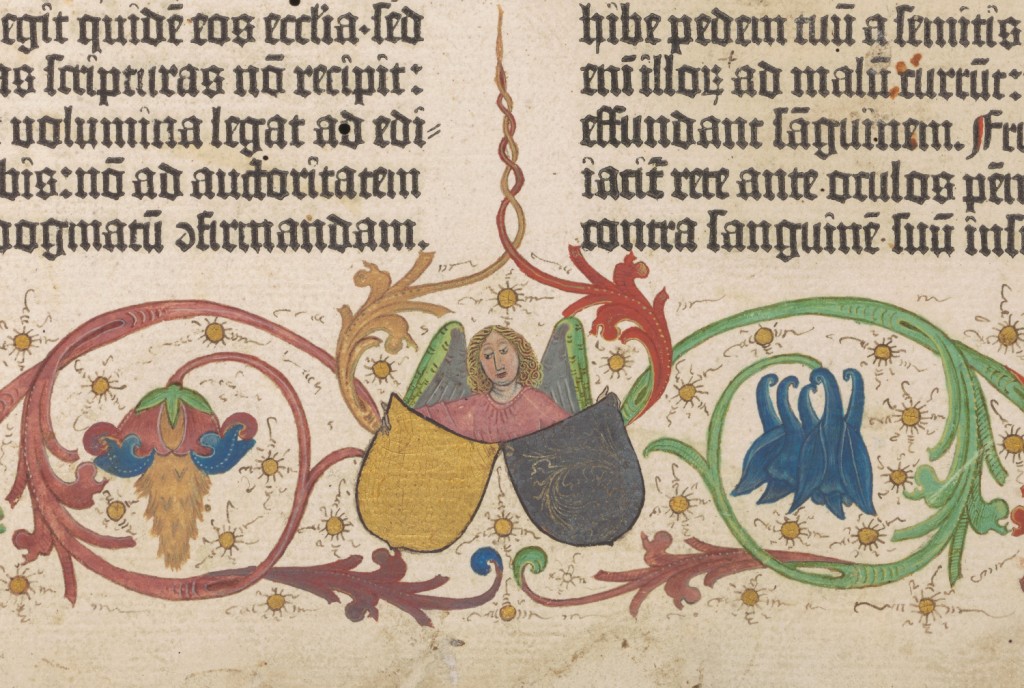 Detail of an angel holding two heraldic crests, between an aroid flower and columbine, within a foliate border at the beginning of the Proverbs; Inc.1.A.1.1[3761.1-2], vol. 2, p. 1

The Bible has been digitised in full for the Digital Library and also appears in an interactive iPad app, Words that changed the world, which can be downloaded from this link.