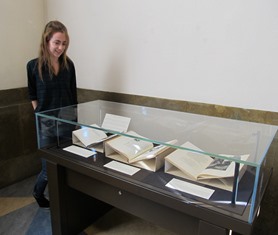 Anna McGee with a display case from her winning exhibition.

This year’s winner of the History of Art/University Library Curatorial Competition is Anna McGee, whose exhibition ‘Agnes Miller Parker’s wood engravings: bringing the word to life’ can be seen in the Library’s Entrance Hall display cases.

“Scottish printmaker Agnes Miller Parker (1895-1980) did not merely illustrate great works of literature, she enriched them. The exhibition will display the wood engravings she created for Aesop’s Fables, Thomas Gray’s Elegy Written in a Country Churchyard, Shakespeare’s Richard II and Thomas Hardy’s most famous novels. Whatever the genre, Parker’s wood engravings brought the word to life. 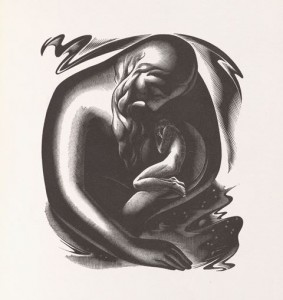 “The use of wood engravings as book illustrations initially lost popularity in the second half of the nineteenth century after the introduction of photomechanical methods of reproduction, which were cheaper and more efficient. However, by the early twentieth century the practice of wood engraving came back into vogue as the scope it provided for artistic expression was recognised. This resurgence was especially associated with the Private Press Movement.

“Despite having received no formal training in the craft, Parker is widely considered the finest wood engraver of this artistic revival, for both the originality of her compositions and the virtuosity of her technique. She studied painting at the Glasgow School of Art and indeed often conceived her wood-engraving designs in colour, which helped her bring a remarkable tonal richness to the final product.”

As well as prints, the exhibition includes one of Parker’s original woodcut blocks from the Library’s Historical Printing Block Collection. ‘Agnes Miller Parker’s wood engravings: bringing the word to life’ runs until 1 December.