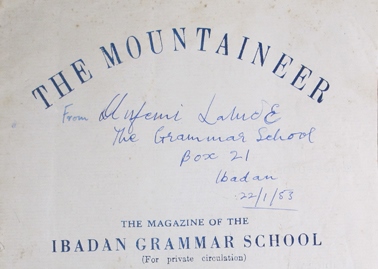 A letter of gratitude

Posted on 17 November 2016 by Agnieszka Drabek-Prime 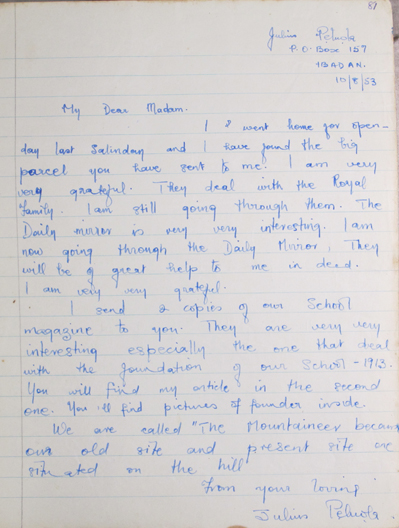 The journey down memory lane through the Rare Books Department’s new collection of school magazines took me from our cool European climate to the much hotter land of Nigeria in the 1950s. It was all triggered by a hand-written letter dated 10th August 1953. This letter was send from Ibadan, Nigeria, together with two issues of ‘The Mountaineer – The Magazine of The Ibadan Grammar School’. It was sent to Mrs. Southeard in Cornwall by a student of the school, Julius Peluola – it was a letter of gratitude. ‘My Dear Madam [it reads]. I went home for open-day last Saturday and I have found the big parcel you have sent to me. I am very very grateful. They deal with the Royal Family. I am still going through them. (…) I send 2 copies of our school magazine to you. They are very very interesting especially the one that deals with the foundation of our school – 1913’. It was enough to raise my interest and to prompt a little research. Ibadan is the state capital of Oyo State, Nigeria. With a population of over 3 million, it is the most populous city in the state, and the third most populous city in Nigeria. Nigeria, on the other hand, is the largest populated country in Africa with about 140 million inhabitants, more than 60 percent of whom are under 25 years old. Each Nigerian represents one of every four Africans. There are hundreds of ethnic groups in Nigeria, with many different languages, customs and religions. Nigeria last had a population census in 2006, but there were plans for the new 2016 census to contain not only population count, but also to include religion and ethnicity. Nigeria provides free government–supported education, but attendance is not compulsory at any level. Certain groups like nomads and the disabled are under-served. Nigeria’s human rights record was and remains very poor. A recent UNESCO survey showed that despite improvement to the country’s education system, 65 million Nigerians remain illiterate. 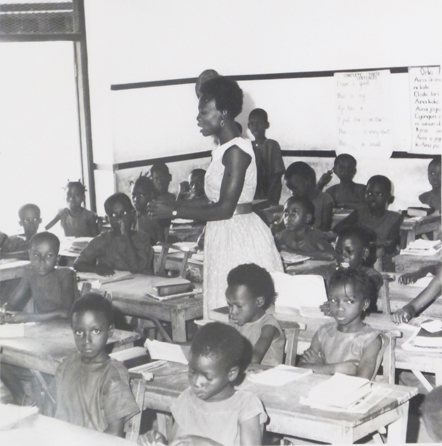 How much has it changed over the years? In 1954 only slightly over 10% of an estimated population of about 30 million were literate. Reading didn’t play any role in everyday African life. Housing and living conditions left much to be desired, and the general struggle for existence, both at home and in the community, made life so exacting that reading became a luxury the African life simple could not afford. Natural causes didn’t make reading any easier. The weather, generally hot and sticky, made outdoor life more appealing, and at night insects attracted by the bright light were a real nuisance. In 1954 adult Nigerians didn’t read for pleasure or to ‘kill time’; reading was solely for a purpose – to improve and develop (see Gbole N.Nwikina, ‘Reading habits of Nigerians’, Development of public libraries in Africa: the Ibadan seminar, (Paris: Unesco, 1954). Nevertheless, one year earlier there was at least one boy reading through a box of Royal Family memorabilia purposefully, but hopefully also for the pure pleasure of it. And another wrote in his school magazine: ‘Scholars should be encouraged to read books and to concentrate very well’. And this brings us back to the school. 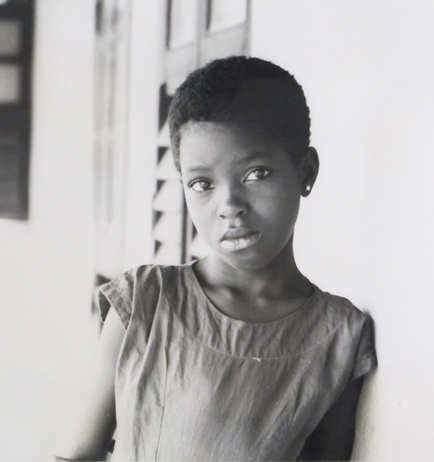 Ibadan Grammar School was established in 1913 and is the oldest secondary school in the city. It started with ’12 foundation students in a mud-built single-storey building owned by Mr. Samson Oke’. In the first 31 years of its establishment, the school only accepted male students. It officially became co-educational in 1941. The school developed slowly, reaching its peak in the 1950s and ’60s after which time its level of teaching started to gradually decrease. The 2011 report, which we can find on the school’s website, states that there are ‘3551 students in Ibadan Grammar School using poorly maintained facilities that are over 50 years old meant for less than 600 students in the 1960’”. The school began its life with only 3 teachers. In 1917 the number of teachers grew to 5. By the 1950s-’60s the situation had changed and the teacher number grew to about 30, most of whom comprised expatriates from UK, USA, Canada, the Netherlands, India, South Africa, Sierra Leone and the West Indies – all of them well educated and ready to bring change to the Nigerian education system. Sadly, after the peak in the 1960s the situation of the school and the level of teaching took a turn for the worse and degenerated very badly. But in the year 1953 the school was at its prime. The school magazine – ‘The Mountaineer‘ – was launched in 1950. The magazine contains information about school life, appeals to parents and guardians for help and donations, teachers’ experiences of teaching at Ibadan Grammar School and elsewhere, description of clubs and groups and students’ experiences of life at school and outside the school gates. 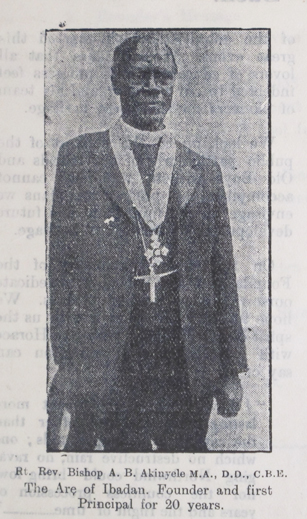 ‘My first experience in a plane’ written by a 19-year-old Senior Prefect was particularly endearing to me (The Mountaineer, Vol. 1. No. 4. December 1952). Personal experiences are followed by updates from the boarding department, riddles and sports news. Then follows a description of the new library and new science laboratory. A poem written by the author of our letter of gratitude closes the issue from 1952. The Mountaineer from June 1953 is the school’s 40th anniversary edition with articles on the history of the school and descriptions of special events that were taking place during this year. I have to say that it is very sad to think how much the school deteriorated from that time. A National Literacy Survey (2010) conducted by the National Bureau of Statistics in Nigeria estimates the adult literacy rate as 56.9%, with huge variations between states. More importantly, statistics from the Federal Ministry of Education indicate that only 500,000 of the 40 million adult illiterates are enrolled in adult learning classes. There are also 3.5 million nomadic school-aged children with only 450,000 of them accessing any form of schooling. Nigeria is further saddled with the largest number of out-of-school-children, estimated at over 7 million (10 percent of the global total). These are very scary and worrying numbers. And it stands in such a huge contrast with the pride and awe that pupils of the Ibadan Grammar School welcomed their new library in 1952.

If you would like to find out more, both numbers of The Mountaineer, The Magazine of the Ibadan Grammar School (Vol. 1. No. 4, December 1952 and Vol. 2. No. 1, June 1953) will be available in the Rare Books reading room soon. Also, if you are interested in the work of Royal Commonwealth Society please see here, and their blog posts here and here for further information.