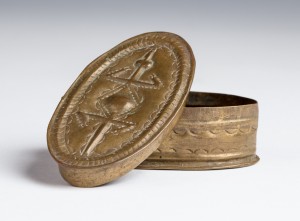 This post is inspired by the set of Asante goldweights, boxes and scale currently on display in the Curious Objects exhibition, which celebrates the Library’s 600th anniversary.  Although the main function of the weights was to foster trade, they often served other purposes, endowing them with a much wider cultural significance.  At times, figurative weights were worn by ill children to assist with their cure, or as charms or amulets to bring the wearer good luck or protect from harm. They were also employed in the observance of customs. When a dowry, debt or fine were due, the requisite gold dust would be measured out and delivered in a box along with an appropriate figurative weight. 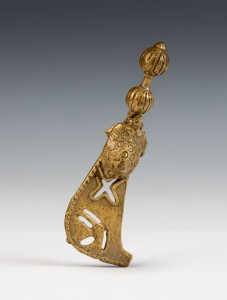 At one time, figurative weights were sent as messages, often with an associated proverb conveying meaning to the recipient, which might be the reminder of an obligation, an offer of friendship, timely advice, or a warning or insult. A king wishing to mobilise support from a subordinate chief, for example, might send a horn, shield, sword or gun; while stools, chairs and knots signified a wish to be on good terms. The Akan were expressive orators and storytellers.  Allusions to proverbs and folktales, which passed down traditional wisdom and morality from one generation to another, were appreciated as evidence of a speaker’s eloquence, knowledge and insight, especially in courtly, political and judicial contexts.  Weights representing human figures, animals and important objects became widely associated with popular sayings or proverbs, although it is not clear exactly when the development occurred. 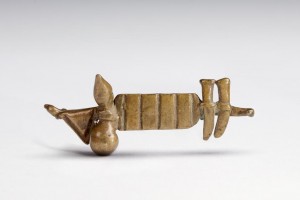 When young children were taught the names and values of goldweights, they were also instructed in their subjects’ symbolic significance. Some weights referred to individual, universally understood proverbs, while others invited the application of a handful of pithy sayings.  The following is a list of proverbs associated with goldweights from the Royal Commonwealth Society set, several of which do not appear in the Curious Objects exhibition.  The literal translation is followed by an explanation of its meaning in brackets:

If the drum has a head you do not beat its sides (only a coward spreads gossip; a better man will tell you openly what is said).

The cutlass of death does not weed in one place alone.

The cartridge belt of Akowua [a famous warrior] has never been known to lack bullets (a resourceful man is never found wanting). 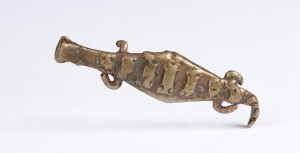 The old crocodile swallows a pebble when the year ends (misfortunes must be expected as part of life).

If the ram is fond of butting, its courage comes from the heart and not from the horns (strength is nothing without courage).

And finally the Scales themselves:

When a fool is squandering his gold dust, he says his scales are out of order. 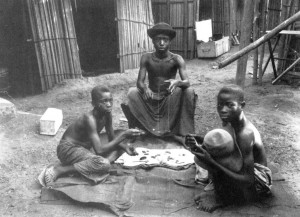 Quotations of the proverbs and related information were taken from Timothy Garrard’s ‘Akan weights and the gold trade’ (London, 1980). To appreciate fully the beauty and diversity of the goldweights see Tom Phillips’ profusely illustrated, ‘African goldweights: miniature sculptures from Ghana, 1400-1990’ (London, 2010).