The original Miss Austen: celebrating the bicentenary of ‘Sense and sensibility’ 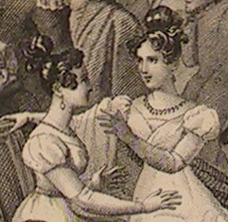 This month marks the 200-year anniversary of Jane Austen’s first novel, Sense and sensibility, which was published in October 1811 as an anonymous work, ‘by a Lady’. The price for a copy was 15 shillings and it sold out in two years, earning its author £140. But what would it have been like to read the novel at the time?

Amongst the rare book collections at Cambridge University Library is the library of the surgeon and bibliographer Sir Geoffrey Keynes (1887–1982), which includes a rich collection of first and early editions of Austen’s works, many still in the original publisher’s boards. These rare survivals give us a glimpse of what it must have been like for Jane Austen’s contemporary readers and many of the copies in the Keynes collection include ownership inscriptions by women.

The copy of the first edition of Sense and sensibility contains the book-label of the ‘The Honble Mrs Perceval’, presumably Jane, wife of the assassinated British Prime Minister Spencer Perceval (1762–1812). It stayed in the family: the copy was inscribed by an Emma C. Perceval in 1900. The collection also includes the first French translation of the work—as Raison et sensibilité, ou, Les deux manières d’aimer / traduit librement de l’anglais, par Mme. Isabelle de Montolieu (Paris, 1815). Both this and the copy of the second French edition (Paris, 1828) belonged to the Empress Marie Louise, second wife of Napoleon I, and are bound in red morocco with her crown initials on the front board.

Geoffrey Keynes compiled the first bibliography of Austen’s works, published in 1929. Bibliography, for Keynes, was the field  ‘where I happen to find my special pleasure, and through which I can best express my homage to the genius of Miss Austen’. Nearly thirty years after the collection came to the Library, interest in books as material culture is high and individual copies of works are valued for their provenance, for what they can tell us about how texts have been used and understood. Staff of the Rare Books Department are now cataloguing the duplicates in the Keynes collection (and recataloguing the non-duplicate material) to record on the online catalogue all the bookplates, ownership inscriptions, annotations and other provenance information so valuable for research.

Copies of 'Sense and sensibility' in the Keynes collection