A Christmas Carol in Pictures 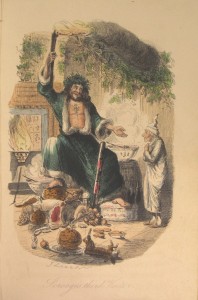 Charles Dickens’s A Christmas Carol was first published in December 1843, with coloured engravings by John Leech. This post is based on an exhibition put together for the Friends of the Library’s Christmas Party this year, using copies from the Library’s collection to show how illustrative styles have changed over the century-and-a-half since the familiar tale first appeared. 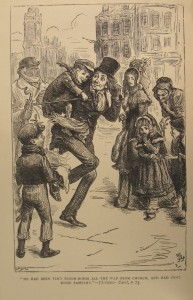 The first edition (left) featured coloured etchings and monochrome wood-engravings by the caricaturist John Leech, which remain the best-known illustrations to the work and were regularly reprinted.

A later paperback edition (right)probably aimed at railway passengers supplements the original illustrations with steel engravings by John Barnard in a more High Victorian style. Some of Leech’s illustrations were re-worked to fit the larger format, not always with happy results. 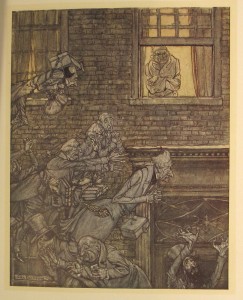 At the beginning of the twentieth century a new generation of artists started to produce illustrations for A Christmas Carol. Arthur Rackham is by far the best-known of these, and his fantastical style (left) seems particularly suited to Dickens’s work. 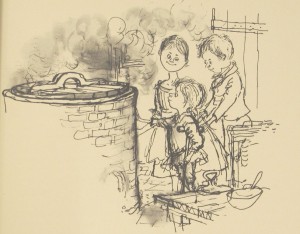 As instantly identifiable but very different is the work of the Cambridge-born illustrator Ronald Searle. He is of course best known for the schoolgirls of St Trinian’s and the boys of St Custard’s, and his version of the Dickens classic (right) is very much in this familiar style. 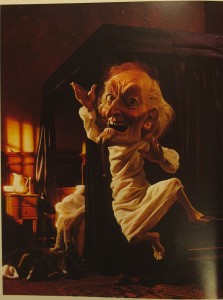 Born respectively in Cambridge and Ely, Peter Fluck and Roger Law are visual satirists in a similar mode to Searle, best known for producing the puppets for the satirical TV show Spitting Image (1984-1996). Their edition of Dickens’s text (left), first published in New York in 1979, uses photographs of their characteristic figures. 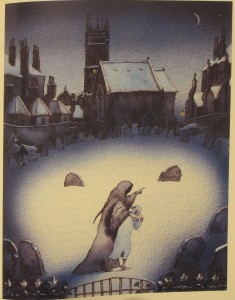 Though Dickens’s work was not originally aimed at a juvenile audience it has always been popular with children, and several modern editions are specifically aimed at young readers. Michael Foreman is a prolific illustrator who has twice won the Kate Greenaway medal for “distinguished illustration in a book for children”. His work for A Christmas Carol (right) is in a style which will be familiar to anyone brought up on children’s fantasy literature in the late twentieth century. 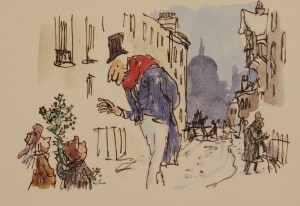 Quentin Blake’s illustrations to A Christmas Carol (left) first appeared in 1995 and have been reprinted several times. The latest edition, published this year, aims to make Dickens’ text more attractive to children with a large format and colourful illustrations by one of the most popular of children’s artists.