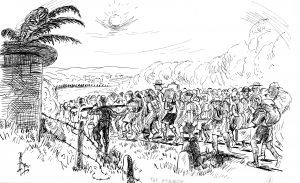 The Royal Commonwealth Society Collections have mounted an exhibition in the entrance hall of Cambridge University Library displaying some of the most significant items from its archives of Second World War civilian internment camps in Singapore. After Singapore’s fall to the Japanese in February 1942, captured British civilians were imprisoned in two camps, initially at Changi Gaol until May 1944, when they were moved to Sime Road.  Unique records from the camps vividly reconstruct internees’ lives, shedding light upon accommodation, discipline, relations with the Japanese authorities, work parties, diet, health, hygiene, recreation and the repatriation of internees at the end of the war.  The exhibition includes a nominal roll recording each internees’ personal data; a map and pen and ink sketches illustrating internees’ experiences; a newspaper circulated within the men’s camp; post-war memoirs published by internees, and photographs of female internees re-enacting their daily lives. One section focuses upon the conservation of the collection, including the important manuscript papers of a camp commandant.

The Changi and Sime Road archives have been thoroughly conserved and are currently being digitised with the support of the Wellcome Trust. They will be made freely available via Cambridge Digital Library in August 2017. This exhibition, however, is a rare opportunity to view original documents evoking one of the Second World War’s most traumatic ordeals. From 20 February to 25 March 2017.

Join us on 25 March 2017 for a Festival of Science event, which offers fascinating insight into the history, conservation and digitisation of the Changi archives: Resilience, repair and research. Our conservator will share findings from a research project devoted to the analysis and treatment of one of the camp nominal rolls.