In the bicentenary of Jane Austen’s death, a new exhibition in the Library’s Entrance Hall brings together the three letters written by Austen held in Cambridge collections: the Fitzwilliam Museum, King’s College, and the University Library itself. Only about 160 of her letters survive, many having been destroyed by her sister Cassandra, who was so often her most intimate correspondent.

The letters and the accompanying items on display are mainly focussed on two very different times in Austen’s life. The letter in the first display case tells of the family’s move to Bath in 1801, before Austen was a published author. The five years that Austen lived in Bath may not have been her happiest, but it was a time that fed into her creative work and certainly into her Bath novel, Northanger Abbey. This letter, from the Fitzwilliam’s collections, was written on her arrival in Bath, and is full of news to her sister about their journey, accommodation in Bath, the cost of food, and clothes (with a diagram). Austen memorably described the city on arrival: 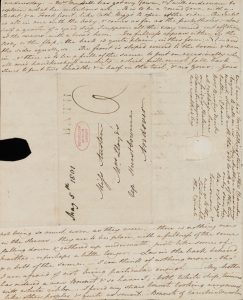 ‘The first veiw of Bath in fine weather does not answer my expectations; I think I see more distinctly thro’ Rain. — The Sun was got behind everything, and the appearance of the place from the top of Kingsdown, was all vapour, shadow, smoke & confusion.’

In the second display case the letters are written by Austen as the author of Emma. Austen’s name was not yet widely known, and her novels were published anonymously, but these letters show how she was admired by aristocracy and royalty, and acknowledged as an innovator by one of the most celebrated writers of the day. On display are an exchange of letters between Austen and Frances Parker, Countess of Morley, who had been sent a copy of Emma on publication. Lady Morley wrote to Austen in December 1815: ‘I am already become intimate in the Woodhouse family, & feel that they will not amuse & interest me less than the Bennetts [sic], Bertrams, Norris’s & all their admirable predecessors—I can give them no higher praise—’. A draft of Austen’s reply is shown alongside: she claimed to be encouraged by Lady Morley’s praise ‘to believe that I have not yet—as almost every Writer of Fancy does sooner or later—overwritten myself’. Both letters were given to Cambridge University Library by J. Pierpont Morgan in 1925. Also in this case is a letter from Austen to her publisher John Murray, written in April 1816, acknowledging Murray’s loan of a copy of the Quarterly Review which included a review of Emma by Walter Scott. Scott’s review was the first serious appreciation of Austen’s writing to appear in print.

Accompanying these letters are several rare printed works from the University Library’s collection, and in particular from the extensive collection of Austen’s first bibliographer, Geoffrey Keynes. These include the first volume of the eight-volume set of Oliver Goldsmith’s An History of the earth, and animated nature (London, 1774), which has inscribed on it ‘Jane Austen 1799’, written when she was twenty-three. All the Goldsmith volumes have the bookplate of James Leigh Perrot, Austen’s maternal uncle, and were probably given to Austen by him with other books when she was visiting Bath in May and June 1799. There are very few books that Jane Austen is known to have owned. David Gilson lists 20 in his Bibliography of Jane Austen (1997). There is also a first edition of Northanger Abbey and Persuasion, published posthumously in 1818, and a copy of the first illustrated edition of any Jane Austen novel, Isabelle de Montolieu’s translation of Persuasion, La famille Elliot, ou L’ancienne inclination, published in Paris in 1821.

The exhibition, which has been curated by Anne Toner of Trinity College, runs until Friday 8 April and is open to the public during the Library’s normal opening hours.