Posted on 7 July 2017 by Catherine Ansorge 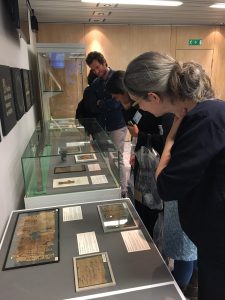 On the 29-30th June, Cambridge University Library hosted a very successful meeting to discuss holdings of papyrus texts and issues surrounding their curation, conservation and digitization.

The conference followed on from two successful meetings held at the British Museum in 2015 and 2016, and attracted an international group of conservators, curators and researchers whose presentations discussed aspects of their work in progress.

The UL holds around 1,500 texts on papyrus and the recent discovery of a previously unknown collection formerly belonging to the Egyptologist Sir Herbert Thompson (1859-1944), initiated a fresh look at the collections here and issues around their care and availability.
For this year’s meeting we welcomed delegates from all over the world whose presentations outlined both problems and results of successful work. The emphasis be on sharing common issues and discussing best practice.

The conference delegates also had the opportunity to see a display of items from our own papyrus collections, to visit the Library’s conservation studio and to view the Genizah’s  ‘Discarded History’ exhibition.

This was followed by a visit to the Fitzwilliam Museum where delegates were able to see the spectacular ‘Book of the Dead of Ramose’ and to the Wren Library where a display of Trinity College’s papyrus collection was much appreciated.