A typographical trip to Lyon 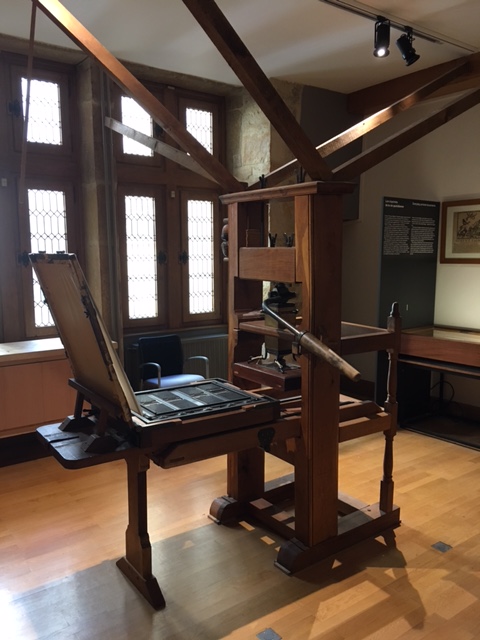 The University Library has, since the 1970s, maintained an Historical Printing Room, where practical teaching on the history of printing has long taken place. We welcome large numbers of undergraduate and postgraduate students every year, along with school groups and professional printers, and work to engage academics within the University with our unique collections. As a member of staff who helps with visiting groups and classes, I was lucky last month to visit the French city of Lyon to participate in a four-day workshop (26-29 June) on the history of type. This was hosted jointly by the École Nationale Supérieure des Sciences de l’Information et des Bibliothèques (ENSSIB) and the city’s Musée de l’Imprimerie, the world’s largest museum dedicated to the history of the book. The workshop, led by Professor James Mosley (former Librarian of the St Bride Institute in London) involved both lectures and practical sessions, and attendees came away with a much-improved knowledge of the history of type design and production from the fifteenth to nineteenth centuries. Lyon itself has a lengthy and important history, particularly when it comes to books. Founded in 43BC by the Roman Senate the settlement originally occupied the Fourvière hill where a number of early Christians were martyred. Nearby there is now a very fine Gallo-Roman museum, housing the so-called ‘Lyon Tablet’ pictured at the foot of this page (a contemporary bronze copy of a speech given by the Emperor Claudius in 48AD, discovered in the city in 1528), a wonderful example of ancient script. Saint Irenaeus (d. 202AD) was Bishop of Lyon and the church which bears his name is one of the oldest in the city. It also has a connection with Cambridge: Codex Bezae (a manuscript of the New Testament written c. 400AD and the University Library’s greatest single treasure) resided there from the ninth to the sixteenth centuries, before its move to Cambridge (a gift by Theodore Beza) in 1581. 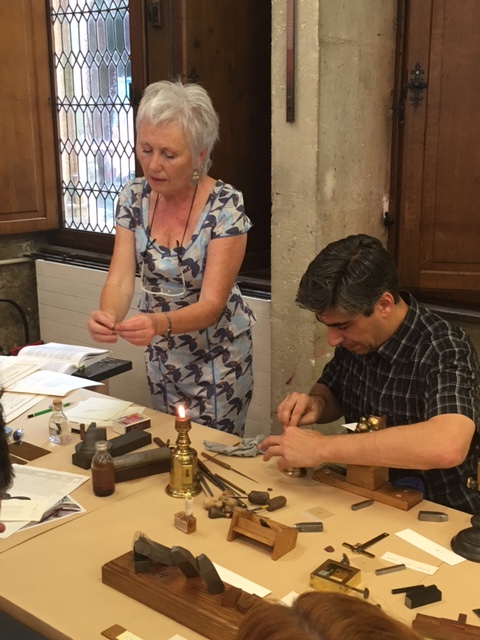 Printing with moveable metal type arrived in Lyon not long after its invention in Germany in the 1450s, with its first printer (Guillaume Le Roy) starting work in the early 1470s, and the trade flourished there in the sixteenth century with Sebastian Gryphius and Jean de Tournes. The workshop traced the development of type and letterforms from the invention of printing until its mechanization during the nineteenth century, covering the design of printing types, the relationship between letters used in other fields such as writing, sculpture and architecture, and the cultural, technical and economic factors that have had an influence on their development. We began with the evolution of scripts in antiquity, their rediscovery in the Renaissance and the early dominance of French and Dutch typefounders in the sixteenth and seventeenth centuries, before covering later figures like John Baskerville (University Printer at Cambridge, whose punches are now housed in the University Library) and the development of commercial types in the nineteenth century. A particular highlight was the session devoted to the traditional processes of making types with a punch, matrix and mould, with punch-cutter Mme Nelly Gable (of the Imprimerie Nationale), and the group enjoyed a session on type-setting, during which we set the text of a French poem, ‘La révolte des caractères’ by Guy Lévis-Mano.

I thank the staff of ENSSIB and the Musée de l’Imprimerie for organising such a fascinating series of sessions for us, and Professor James Mosley for leading us through the mysteries of typography. It was a privilege to spend time in a wonderful city, sharing knowledge with a host of academics, librarians and printers, and coming away inspired to learn more! 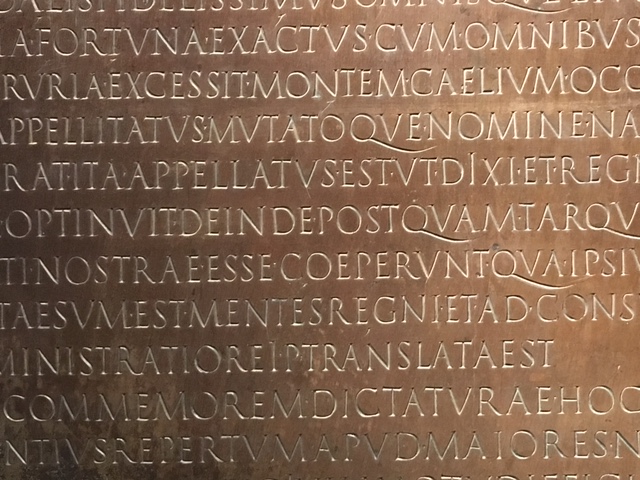 Part of the Lyon Tablet, a speech by the Emperor Claudius cast in bronze in the 1st century AD