Posted on 2 September 2017 by Special Collections

The Battle of Passchendaele, or Third Ypres was fought one hundred years ago between July and November 1917. One of the regiments involved was the Cambridgeshire Regiment which as a territorial unit, contained many local men, and students and alumni of the University. They were involved in two battles, that of St Julien on 31 July and of Tower Hamlets Ridge on 26 September.

One of their young officers was Basil Godfrey Quin, already a maths graduate of Durham but a first year undergraduate at St John’s College in 1915, who then interrupted his studies to take a commission in the Cambridgeshires. He arrived in France a few weeks before the battle of St Julien and had only been in theatre eleven weeks when he fought in the battle for Tower Hamlets Ridge. During both battles the regiments either side of the Cambridgeshires had been pushed back, or withdrawn, leaving exposed flanks susceptible to enfilade fire. Quin was awarded a Military Cross for his bravery at Tower Hamlets when he spotted an exposed flank and took it upon himself to arrange defences to prevent the men being attacked from the side and potentially cutting off the leading company. His quick thinking materially affected the day’s fighting and as such the award was well deserved. 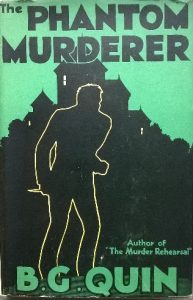 The phantom murderer by B. G. Quin

Quin survived the War and afterwards became a mathematics teacher and later master at a school in his home county of Northumberland. During the late 1920s and early 1930s Quin wrote a series of detective novels published by Hutchinson of London: The death box [UL: 1929.7.2987], Mystery of the black gate [UL: 1930.7.1043], The murder rehearsal [UL: 1931.7.1179], Mistigris [UL: 1932.7.65] and The phantom murderer [UL: 1932.7.1792]. These novels were received by the University Library under the Copyright Act, now the Legal Deposit Act, and since the collection was moved to the current library building have been stored on various floors of the Library tower. They, with their jackets, are on display in the Entrance Hall display cases, probably grouped together here for the first time. Alongside are several contemporary publications which help the modern researcher acquire information about men of Quin’s generation.

The Army List [UL: OP.4100.8.0221] has been produced by the Government since 1740. It lists all commissioned officers of the Regular and Territorial Army. Its publishing pattern has varied over the years but during World War 1 it was published monthly with officers appearing listed under their regiment under their most recent rank and only being removed upon their death or discharge. It is a useful tool to track an officer’s career although it is a reminder of the sheer scale of the War and the rate of turnover of personnel as men appear then disappear when they become casualties. It also uses a series of symbols and notes to provide considerable additional information about the individual. The copy displayed is open showing the officers of the Cambridgeshire Regiment for November 1918.

The London Gazette [UL: OP.4.01], produced by The Stationery Office since 1665, contains both civilian and military information. For the military researcher it lists the promotions of all commissioned officers, and can be easily cross-referenced to the Army List; it also lists awards for gallantry to all levels of service personnel. It contains citations providing descriptive content for various awards and simple notifications for others. The copy displayed in the exhibition is open showing Quin’s Military Cross citation.

The Cambridgeshires, 1914-1919 by General E.P.A. Riddell KCMG DSO and Colonel M.C. Clayton DSO [UL: Cam.c.934.2]: this is the official regimental history of the Cambridgeshire Regiment. It was written by two of the wartime commanding officers and is an excellent first-hand account of the Regiment’s time on the Western Front. It is displayed in the exhibition open at a short account of Quin and his CO Colonel Riddell’s expedition to gather intelligence immediately prior to the battle of Tower Hamlets. They are spotted and fired upon by the enemy machine gunners but despite several very near misses both men survive this reconnaissance and the following day’s battle. The University Library’s WRA-WRE collection, accessible through the Rare Books Reading Room, contains many such histories for other regiments in addition to those found in the general collections.

The war list of the University of Cambridge 1914-1918 by G.V. Carey [UL: Cam.c.921.33 and WRC.44.14] contains the names of some 15000 University men who served their country during the War. For various technical and practical reasons it isn’t absolutely comprehensive but it is a testament to the contribution to the War effort made by Cambridge University men. Subdivided by college but with a full index, ranks and awards for gallantry are listed and those who did not survive the War are noted with a small cross beside their name.

Also on display, by kind permission of the family, are some of Quin’s possessions from both his time at Cambridge and his time in France and Flanders: Quin’s Military Cross, British War and Victory Medals are physical embodiments of his time on the battlefield, though they remain unworn. In contrast, his British Army issue service revolver holster was carried throughout his time on the Western Front, in and out of battle, but is now safely minus the revolver. His Cambridge life is represented by a blazer pocket which carries the badge of his college athletics club and a receipt, from his Bursar at St. John’s, for the furniture and fittings of his room in college. It is hard to imagine going from the streets of Cambridge to the trenches of the Western Front but a hundred years ago, it’s precisely what men like Quin were doing.

The exhibition will run until Wednesday 27 September and more can be read about Quin himself here: The value of Legal Deposit