Every autumn – since 2006 – Cambridge University Library is hosting an Introduction to Islamic Codicology, a one week course and workshop on the material and artistic composition of medieval Islamic manuscripts.

The physical features of a codex (Latin for book and widely associated with a bound handwritten manuscript) are manifold and their analysis and description reveal stories, untold in the texts they contain. The term “Islamic manuscripts” or “Manuscripts in Arabic script” refers to a tradition in which the Arabic alphabet evolved with the rise of Islam in the 7th C. AD and prevailed as the standard script of the written cultures shaped by and around Islam, with adaptations and additions to accommodate sounds in languages other than Arabic.[1] 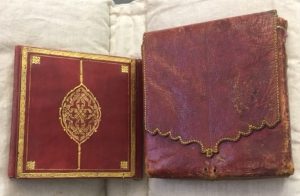 Cambridge University Library holds about 4500 Islamic manuscripts copied in an area reaching from Indonesia to the Sub Sahara and from Eurasia across the Arabian/Persian Gulf.

While some works remain indigenous to particular geographic areas, most texts are prevalent throughout the Islamic world, travelling back and forth between regions. This is particularly, but by no means exclusively true for the text of the holy Qur’an.

Therefore, it is often not the intellectual content (text) of a manuscript that informs us of the place and time of its production but the material support (papyrus, parchment, paper) and its specifications, the ink, the style of script, the layout, ornamentation and illustrations and the binding of a manuscript. Indeed, the history of the finished work, especially when it has been in circulation and use, can be traced through textual additions, corrections, traces of ownership and other para textual features, if these can be found and correctly identified. 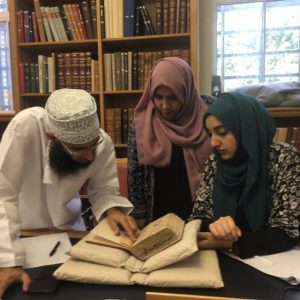 The main focus of the Introduction to Islamic Codicology course, is on the material features and the making of a manuscript within Islamic traditions, distinct from Western traditions prevailing in Europe and also from established Christian (Syriac, Armenian, etc.) and Jewish traditions within the same geographical areas. The course consists of morning lectures focusing on the writing supports (parchment, paper) and the traditional manufacturing and treatment, and afternoon workshops where manuscripts are examined for features discussed during the lectures. Throughout the week, students learn about and analyse gatherings (quires) of supports (parchment or paper) and their bindings, ink, layout and illuminations, types of scripts and the various artistry used to produce fine covers. 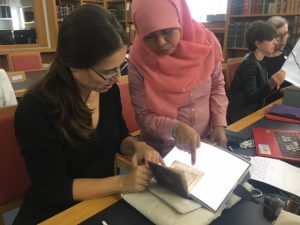 For five days students embark on a journey with manuscripts from the Cambridge University Library collection, to discover their anatomy and learn about techniques and materials of their composition. In preparation of this adventure the group is instructed by professional conservators on the correct handling of these unique and precious items, while supervised throughout.

The academic instructors are François Déroche, Chair in the History of the Qur’an, Text and Transmission at the Collège de France in Paris, previously Chair of the History and Codicology of the Arabic Handwritten Book at the École Pratique des Hautes Études and author of Islamic Codicology: An Introduction to the Study of Manuscripts in Arabic Script (2006), and Nuria Martínez de Castilla Muñoz, current Chair of the Codicology and History of the Manuscript Book in the Islamicate World at the École Pratique des Hautes Études in Paris. 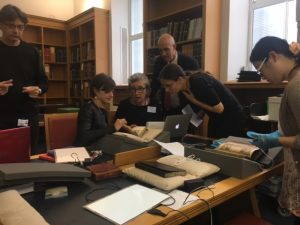 The course is organised in collaboration with The Islamic Manuscript Association.

[1] The Indo-European languages Persian and Urdu are written in Arabic script until today and so was modern Turkish and its relatives before language reforms in the early 1900s.