The Digital Recovery of a Lost Page of Codex Bezae

A guest post by Elijah Hixson.  Elijah is currently finishing his PhD on 6th-century Greek manuscripts of the Gospels at the University of Edinburgh.

Among the treasures of the Cambridge University Library is the famous Codex Bezae (MS Nn.2.41, Gregory-Aland D05).  A Greek-Latin diglot of the four Gospels, the Acts of the Apostles and a fragment of the Third Epistle of John, Codex Bezae dates to c. 400 CE and is among the most studied manuscripts of the New Testament in existence.  It was cited at the Council of Trent in 1546, and in 1550 Robert Estienne cited variant readings in Codex Bezae in the margins of his Greek New Testament.  In 1562, it came into the possession of the Calvinist theologian Theodore Beza, who gave it to the University of Cambridge in 1581.  To this day, Codex Bezae continues to be the subject of books, articles, conferences and doctoral theses. 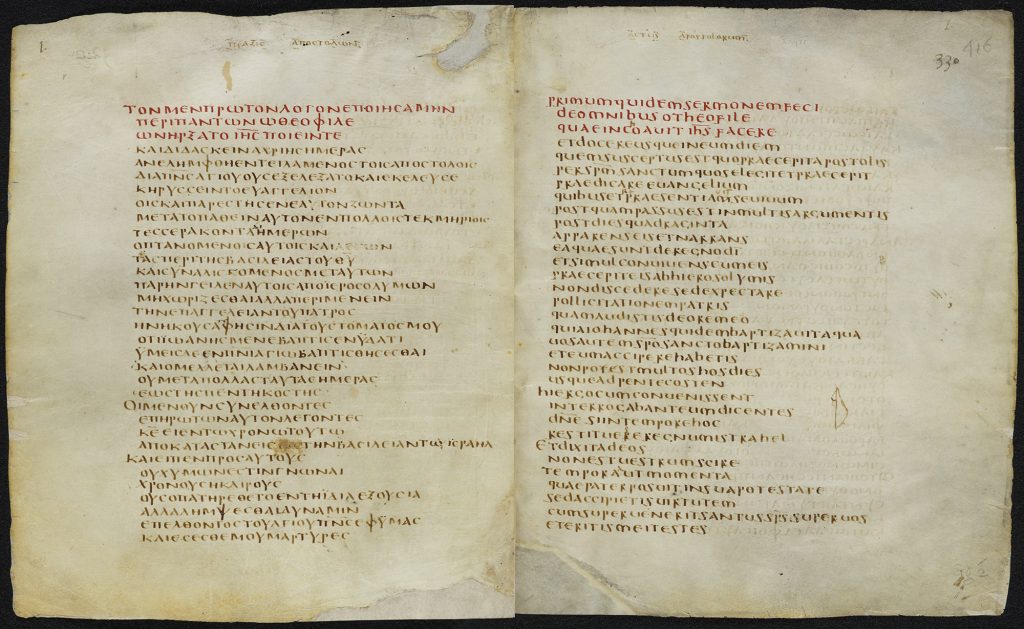 Codex Bezae is known for its remarkable text.  It preserves the Gospels in the so-called ‘Western’ order: Matthew, John, Luke and Mark.  It is the oldest known manuscript to include the pericope adulterae (John 7:53–8:12).  Most significantly, however, is the Bezan text of the Acts of the Apostles.  The text of Acts in Codex Bezae is around 8% longer than the standard text due to words and phrases added throughout to smooth out the narrative.  Like so many ancient manuscripts, it has lost a few pages in its long life.  It is to those missing pages that we turn – and to one in particular.

We must first take a brief detour to another manuscript of the New Testament, Gregory-Aland 33 (Paris, Bibliothèque nationale de France, gr. 14).  Codex gr. 14 was nicknamed ‘Queen of the Cursives’, but ‘Her Majesty’ did not earn her title from any regal appearance.  This manuscript has an important text, but at places it is nearly impossible to read due to damage from having been stored in damp conditions in the past.  One scholar was able to read it, though in an unusual manner.  Samuel P. Tregelles noted that although there was no visible writing where there should have been, the text was not completely lost.  It was just in the wrong place: on the opposite page, backwards.  The damp storage conditions had caused the pages to stick together.  When they were pulled apart, the ink often adhered to the facing page.[1] 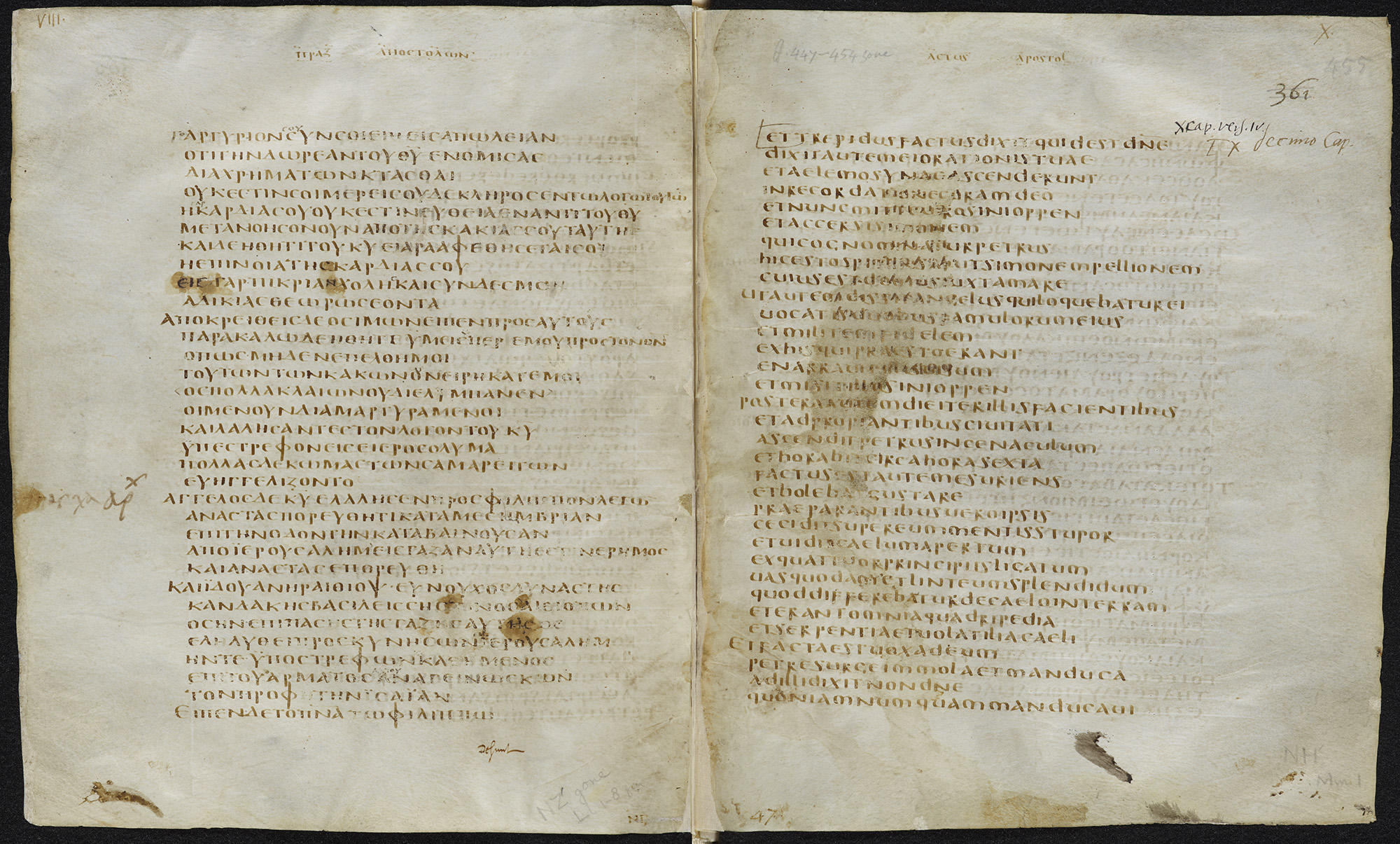 Location of several missing leaves in the Acts of the Apostles, with evidence of water damage and adhered letters on the recto – MS Nn.2.41, ff. 446v-455r

The same phenomenon occurs in Codex Bezae.  In at least one place, a few letters from the Greek side have stuck – backwards – to the facing page of Latin text.  What is significant, however, is that in this one place, the Greek page was subsequently lost. We have no record of what this page looked like or what Greek text it contained. Thanks to the wonderful images of Codex Bezae on the Cambridge University Digital Library, it is possible to work with the images in photo-editing software to recover some of the lost text.  I give the following example from one line on folio 455r.

The first step is to notice the anomalies in a line—the traces of ink that do not look like they are part of the original Latin writing. Some ink is offset an a colour different than what we would expect. Notice in particular the triangular shape in the middle of the above image.

The second step is to reverse the image; it is easier than reading traces of Greek letters backwards. With the image reversed, we can see that the triangular shape in the middle is really the remnant of an α. Slowly the letters on either side become clear.

The final step is to reconstruct the text digitally. Based on the Latin text and a knowledge of what is in the text of most Greek manuscripts at this point, we can try out some possibilities and see which letters fit with the traces of ink that are there. Using actual examples of Greek writing from the scribe’s own hand elsewhere in Codex Bezae, we can fill in the text.

(The very first gif to appear on the Special Collections blog!)

What we find is that the reconstruction works: the expected text fits the traces of ink that are there: θαλαϲϲα[ν] (thalassa[n]; ‘sea’).  The final letter was beyond the edge of the water damage, so none of the ink from that letter transferred to this page.  This line is from Acts 10:6 and it refers to Simon the tanner, whose house was by the sea.

It was fascinating to be able to read parts of this lost page for the first time in several hundred years. I am especially thankful to the staff of Cambridge University Library Special Collections and Conservation departments for allowing me to see the manuscript in person in February 2017 to verify some of the traces of ink.

A published article on this subject is now available in the journal New Testament Studies.