Posted on 30 October 2017 by Special Collections

The leading Austrian Modernist writer, Arthur Schnitzler, died on 21 October 1931. Marking the anniversary of the author’s death, the digital portal constructed for the collaborative project, ‘Arthur Schnitzler digital: A Digital Critical Edition of the Works from 1905 to 1931’ has been relaunched in extended form. The binational collaboration is being conducted by researchers from the Bergische Universität Wuppertal, the University of Cambridge and University College London, in conjunction with the Centre for Digital Humanities at the University of Trier, and Cambridge University Library, where the larger part of Schnitzler’s literary estate is held. The University Library will be hosting the edition as a major new digital resource. 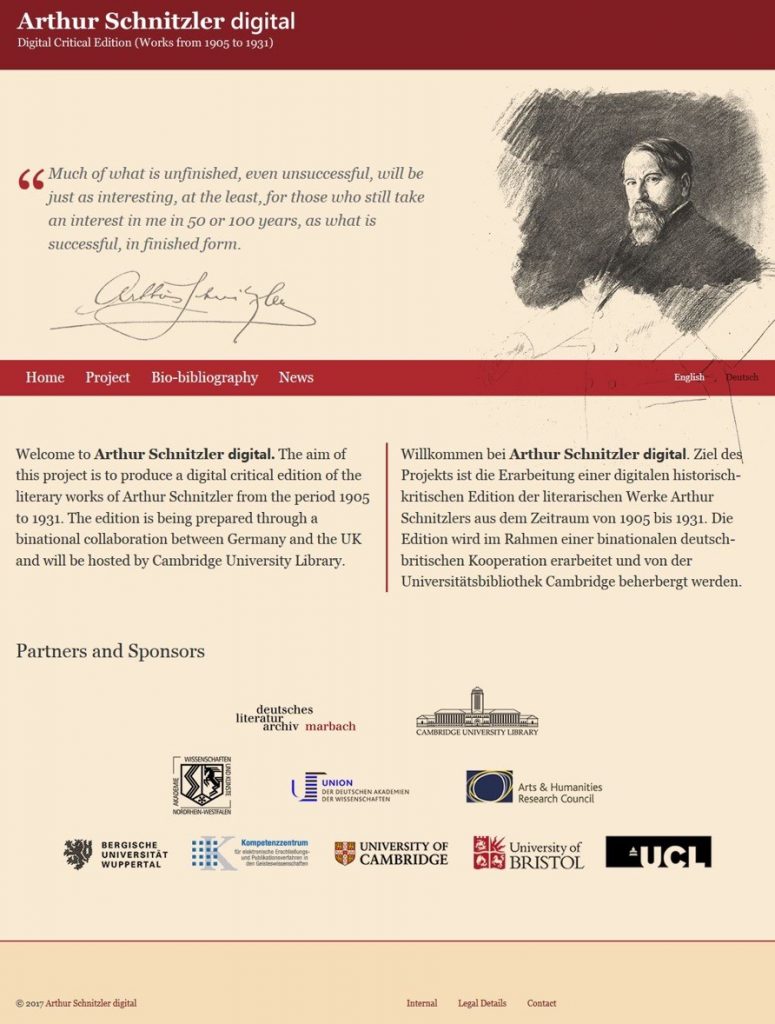 The extension of the portal includes significant new information and functions, in a form hitherto unavailable to those interested in the work of Schnitzler. This includes a detailed reconstruction of the complicated circumstances surrounding the fate of Schnitzler’s papers, which were brought from Vienna to Cambridge in 1938, when Austria came under National Socialist control. There is also a list of all the locations world-wide where parts of Schnitzler’s literary estate – original documents or copies – are held, including the various class-marks used by the different archives.

A key new facility is the Schnitzler Bibliography, which aims to provide a comprehensive interactive database, including film and audio resources. For the first time, this database allows scholars and other users to search for information relating to all editions of Schnitzler’s works, to film versions, musical settings and readings, as well as to the mass of critical scholarship.

This extension of the portal is part of the preparation for the two first publications by the teams involved in the collaborative research project. The first modules of the digital critical editions of Schnitzler’s remarkable interior monologue novella, Fräulein Else (1924) and of the cycle of single-act dramas concerned with puppetry, Marionetten (1906), will be going live, with open access, in a few weeks’ time. Watch this space …