Posted on 31 October 2017 by Catherine Ansorge

On the 19th and 20th of October a conference was held in Basel to commemorate the 200th anniversary of the death of the explorer John Lewis Burckhardt in October 1817. Burckhardt was a native of Basel, born into a wealthy family of silk and ribbon manufacturers. Organised jointly by the Universities of Basel and Kent and entitled ‘Johann Ludwig Burckhardt (1784-1817); Exploration, Archaeology and Orientalism between Enlightenment and Empire’ the conference drew an international audience of participants and generated interest among the local population to whom the explorer is something of a local hero. An evening lecture by one of the Conference organiser’s Dr Jan Loop of the University of Kent, centred on the wider context of Burckhardt’s life and his place in European oriental tradition. This was attended by over seventy members of the Burckhardt family currently resident in and around Basel. 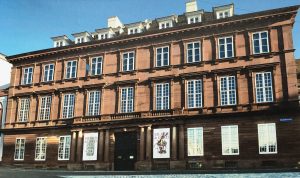 One of the highlights of the conference was a visit to the Burckhardt family home, the ‘Kirschgarten’ a palatial family residence not far from the centre of Basel where the explorer spent his childhood until his departure to university in Leipzig in 1800.
‘Kirschgarten’ is a four-storey residence built of the reddish coloured stone common in Basel with spacious accommodation for the Burckhardt family and their large retinue of servants. Built between 1775 and 1780 by the explorer’s father, Rudolf Burckhardt, and designed by a young local architect with many adaptations to the original plan, it was an enormously expensive building project. Conceived on a grand scale it included a main front entrance large enough for a horse and carriage to drive inside to deliver its passengers sheltered from the weather. Such a lavish house, the largest family residence in the city, was thought to be somewhat showy in the rather Calvinist Basel where the outer demonstration of wealth was frowned upon. 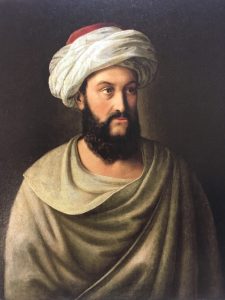 It brought Rudolf Burckhardt a certain amount of approbation from the local residents. The upper floors of the building contain the family’s own living quarters and a high point of the visit was to see the small wood-panelled bedroom looking out onto the garden where the explorer would have slept as a boy.

For the period of the Conference, a display of Burckhardt memorabilia was set up in the house in a small side room off the main salon. This included a portrait of the explorer by Sebastian Gutzwiller owned by the Historisches Museum Basel and the original certificate recording the explorer’s successful completion of the hajj, bound into a volume of letters owned by Universistätsbliothek Basel. Burckhardt was one of the few Europeans to complete the hajj after spending several months in Mecca in 1814.

The house now forms part of Basel’s Historisches Museum and houses a collection of furniture and household items contemporary to Burckhardt’s time and including some items given by the Burckhardt family. 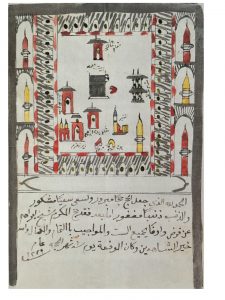 The Museum also hosts concerts in its grand rooms, something that the explorer would surely have approved of; during his travels in the Middle East, it is said that music was something he especially missed.

The conference itself drew speakers from a wide area who talked on many aspects of the explorer’s life, providing new insights into his travels and the contemporary age of exploration, including one presentation on the significance of Burckhardt’s rediscovery of Petra on apocalyptic literature. A talk on the CUL’s Burckhardt archive of notebooks written while he was in Cambridge was given by Catherine Ansorge. A talk on the Burckhardt manuscript collection, bequeathed to the Library by the explorer on his deathbed was given by Yasmin Faghihi. Other conference delegates were fascinated to hear about the Cambridge Burckhardt collections and how his stay in the city in 1808 could have influenced his later travels.