Reckoning the lost and found: tally sticks re-discovered at the UL

In an institution that’s been collecting archives for centuries it’s almost impossible to know about everything that you hold – therefore there are always lovely surprises.  Since starting work in the Department of MSS and University Archives at the UL in January 2017 I’ve been surveying a number of collections to assess and distil their cataloguing requirements.  In reality this means having a good rummage around on shelves and opening boxes to see what’s inside.  Over the next few months I will be talking about some of the intriguing and fascinating documents I’ve come across but I want to start with the wonderful tally sticks that turned up recently in an uncatalogued box in the Cholmondeley (Houghton) collection (best known for containing correspondence and political papers of Robert Walpole (1676-1745), Britain’s first Prime Minister).

Tally sticks were used in England from the 12th century up to the early 19th century to record payments and obligations.  Notches denoting specific sums of money were cut into the stick, which was then split into two with each party to the agreement retaining one piece.  This was an effective technique against fraud because only the originals could be put back together perfectly.  Details of the transaction were usually written on the sticks, as can be seen here.

I came across the tally sticks in an unlabelled box at the end of the uncatalogued sequence of the collection.  They were hidden underneath a number of deeds that relate to various transfers of ownership.  While they would have been known about on the arrival of the collection in the 1950s, they do not appear in any catalogue and I cannot find a reference to them anywhere.  I am always careful about the use of words like “found” and “discovered” in relation to archives but I think it’s safe to say that these items were as good as lost! 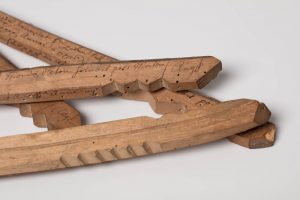 After a bit of digging around I established that these tally sticks were issued by the Exchequer to Sir Thomas Littleton (1647-1709), Speaker of the House of Commons and Treasurer of the Navy, under a 1704 Act to raise money to help fund Britain’s continued participation in the War of the Spanish Succession.  Sir Thomas died a few years later without heirs so it is possible that the tally sticks came into the possession of Robert Walpole, the owner of the Houghton estate, when he became Treasurer of the Navy in 1710.

Over the centuries it is likely that millions of tally sticks existed but most have been lost.  They are relatively fragile and once the sum of money they referred to had been paid they were of no further use.  (Notoriously, it was a mass burning of tally sticks in 1834 that caused the fire that almost completely destroyed the Houses of Parliament.)  I had never actually seen one in real life so it was genuinely thrilling to open this box and find several at the bottom.  Oddly, what struck me most about them was how weightless and insubstantial they seem.  I’ve had a big response on Twitter (@SianECollins) to a picture of the tally sticks so I don’t think I’m the only one to be fascinated by them!

A few of the tally sticks will temporarily be on display during the Lost and Found event at the UL on Saturday 25 November, which is part of the Being Human Festival.