The earliest surviving official set in Cambridge of the University’s medieval statutes is one of three treasures from the University Archives newly online as part of Cambridge Digital Library. Thanks to the Society for the History of the University, generous funders of the digitisation, everyone can now access the statutes in the Old Proctor’s Book, parts of which date from ca 1390, alongside the no less significant statutory code presented by Elizabeth I in 1570 and the earliest register of University business from 1454 onwards, Grace Book Alpha.

Originally containing all the statutes by which the University was then ruled, the statute book’s creation for use by the Proctors, the Chancellor’s chief executive officers, may have been a result of the reorganisation of records after the partial destruction of the University’s muniments during the Peasant’s Revolt of 1381. 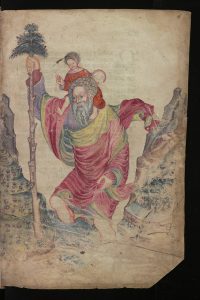 The statutes prescribed officials and their responsibilities, lectures, examinations, degrees and the academical calendar. Modified as organisational needs required, they were a living tradition supplemented by custom. Perhaps unexpectedly in their midst are two striking illuminations, St Christopher carrying the Christ Child and the Virgin and Child enthroned beneath a gothic canopy, intended to underline the solemnity of oaths sworn by civic officials. 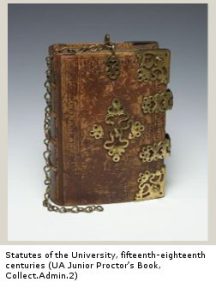 Stoutly adorned with metal bosses and clasps and with carrying chains for use in processions, they are slated for digitisation when funds allow.

These statutes were added to from time to time until 1570 when the great Elizbethan code of statutes became the new foundation of government. 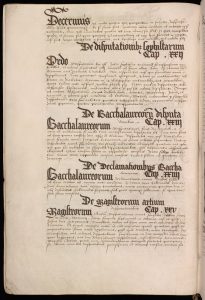 Their most significant innovation was the concentrating of power in the hands of a small elite: the Vice-Chancellor (the Chancellor being largely absent representing the University at Court by this date), Heads of Colleges and the Caput Senatus, away from the Proctors and those University MAs with teaching responsibilities, the Regent Masters. The Vice-Chancellor, for example, was given full responsibility for the University’s finances. Celibacy was enforced on the Fellows of Colleges. The Elizabethan statutes remained in force until the mid-Victorian reforms of 1858-82.

The continuous adminstrative records of the University begin in 1454 with the series of Grace Books. The earliest, Grace Book Alpha, contains the undifferentiated records of University business both financial and administrative and was kept by the Proctors. Here they wrote up their annual accounts; that is, receipts and expenditure of great variety from the Chest including fees received from students at academic exercises and forfeited ‘cautions’ or money pledges. The book was also used to record ‘graces’ granted; appointments of commissions for special purposes; decrees of congregations; and occasionally as a register of documents. 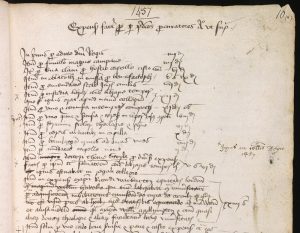 The ‘grace‘ was originally a personal exemption from statutory requirements granted by the Regent House (the University’s governing body) to those aspiring to a degree. It came to serve wider and more general purposes and is still the name applied to signficant motions for decision by the Regent House. From the fifteenth century, degrees became increasingly ‘gratuosi’, that is awarded by grace, rather than ‘rigorosi’, awarded according to the rules. The series of Grace Books therefore, of which this is the earliest surviving, provide what is virtually a register of degrees.

Images in the Digital Library are accompanied by detailed descriptions to aid navigation. Further catalogue information on these items and indeed on all the University’s medieval records are online on Janus, the internet resource for catalogues of Cambridge Archives.