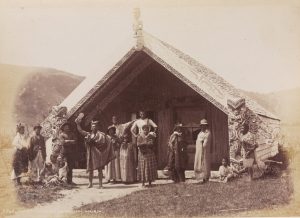 The Royal Commonwealth Society department has just published images of approximately 1,500 historic photographs on Cambridge Digital Library.  These photographs, our most ambitious release to-date, have been digitised with the very generous support of the Anstruther Trust, and include many of the treasures of the collection.  They reflect its broad chronological scope and great geographic diversity.  The earliest photographs date from 1850s New Zealand, and the latest by Douglas Moore, document the influx of refugees into Hong Kong in 1949, displaced by China’s Civil War (Y3038E).  Africa, Southeast Asia, North America and Oceania are all represented. 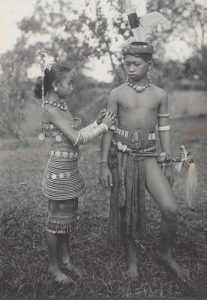 The photographs also reflect an equally rich variety of creators and collectors, many being the breath-taking work of pioneering professionals, such as Alfred Henry Burton (1834-1914).  Burton was elected to the Royal Geographical Society in 1885 in recognition of the ethnographical importance of his photographic tour of New Zealand undertaken during the previous year (Y3089D).  Other photographs represent the unique experience of individuals, documenting their work or travels.  These include an album compiled by Charles Hose, a colonial civil servant who served the Raja of Sarawak from 1884 to 1907.  Hose was a keen amateur photographer, geographer, anthropologist and collector of natural history specimens, which he donated the British Museum (Y3035A).  Dr Henry Paton, who served in the English Presbyterian Mission at Quanzhou between 1889 and 1913, provides fascinating insight into his work as a physician and life in contemporary China (Y30377H). 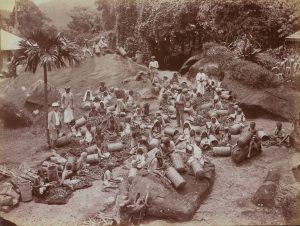 While the photographs’ subject matter is extremely wide, several themes are worth noting.  Students of botany, forestry and agriculture will be thrilled to view the photographs compiled by two leading nineteen-century specialists in the field.  John Abercromby Alexander (b. 1854) worked as a Forester in Ceylon [Sri Lanka] during the 1880s and 1890s, and his collection includes many images of the cultivation of coffee, tea, cinchona, cinnamon and other products on the island, and of the Peradeniya Botanical Gardens.  He later worked in experimental agriculture in Portuguese East Africa (Y303E).  Sir Daniel Morris compiled a similar album of photographs during his tenure as Director of the Botanic Department in Jamaica from 1879 to 1886.  He later became Scientific Advisor in Tropical Agriculture to the Colonial Office.  Morris’s photographs include views of Jamaica’s experimental plantations as well as shots of the working and living conditions of agricultural labourers (Y3073D). 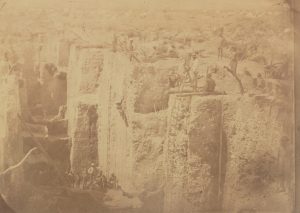 The dramatic early development of South Africa’s diamond industry is vividly brought to life in two very rare photograph collections.  The discovery of a diamond on the De Beers Farm in July 1871 instigated the ‘New Rush’ as thousands of diggers flooded to the site.  Photographers joined the throng hoping to make their fortunes through working claims or by taking pictures.  The work of an unidentified photographer, ‘Kimberley Diamond Diggings’, captures the chaos of the early years of the rush, depicting the myriad of small, individual plots connected by a network of narrow, precarious roadways (Y3059L).  The danger of collapse intensified as the depth of these poorly supported shafts increased.  A process of amalgamation was inevitable, leading to the formation of the De Beers Mining Company in 1874 by two of the great magnates, Cecil Rhodes and C.D. Rudd.  In 1888, De Beers obtained a monopoly with the acquisition of its final rival.  The transformation of the industry during these years into a highly organised, mechanised operation is illustrated by the Kimberley photographer J.E. Middlebrook.  He photographed De Beers’ mining operations in 1891, comprehensively depicting ‘the various processes by which the Diamond is won from the bowels of the earth’ (Y3059C). 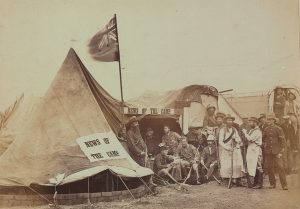 Several of the collections relate to military history, and the two South African Wars in particular.  The first set of photographs illustrates ‘The News of the Camp’, a newspaper published by the flamboyant actor Charles Du Val, who happened to be touring southern Africa with his travelling show when the Boers besieged Pretoria during the first conflict (1880-81).  An opportunist and avid self-promoter, Du Val edited a journal which circulated within the town during the siege, and arranged for its post-war publication with photographs taken by H.F. Gros, who was one of the most important early photographers in the Transvaal.  Very few copies of the ‘News of the Camp’ survive, and the RCS has Du Val’s own personal copy, containing the largest number of prints (Y3055A).  Two other albums relate to the Second South African War (1899-1902).  The first was likely created by an officer of the South Lancashire Regiment, documenting its service at Vryheid in the eastern Transvaal between 1900 and 1901.  The collection includes images of the regiment’s officers and men, encampment, defences, patrols, logistics and recreational activities, and the arrival of allied Zulu warriors. There are also images of the town of Vryheid and its inhabitants (Y3058H).  The other album records the transportation of horses from Newcastle and Sydney, New South Wales, to South Africa.  It was probably created by the firm of Houlder Brothers, London, which held a contract with the army’s Remount Department (Y308M). 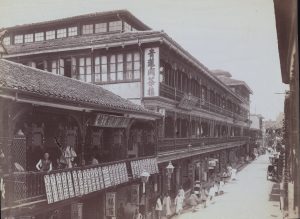 The RCS holds a collection of rare photographic panoramas and several more important examples have been digitised.  These include our largest, a panorama of Medicine Hat, Alberta, Canada, taken in 1913, which is over 2 metres in length.  The area surrounding the city was famous for its rich natural gas reserves, prompting Rudyard Kipling’s declaration that it ‘seems to have all hell for a basement, and the only trap door appears to be in Medicine Hat’ (Y306863A).  Those interested in the history of Shanghai will be thrilled to view an eight part panoramic view of the waterfront dating from 1898 (Y30377F).  Finally, we have also reproduced a panorama of Hong Kong as it appeared in 1846, based upon the drawings of naval officer L.G. Heath, published by the Hydrographic Office of the Admiralty (RCMS 385).