Brooke Crutchley (1907–2003) was Printer to Cambridge University between 1946 and 1974 and an advocate of good book design and typography. His collection of letterpress printing (Ref: MS Add.9824/E) comprises over 200 items, including limited edition booklets, prospectuses, Christmas greetings, invitations to exhibitions and dinners, monographs and other single sheet ephemera sent to Crutchley by friends and colleagues from private presses in the UK and abroad. The collection was kept in six box files in his study in Little Shelford, Cambridge, labelled ‘Double Crown Club’, ‘Printing Items 1’, ‘Printing Items 2’, ‘Private Presses’, ‘Rampant Lions Press’ and ‘Whittington Press & Gwasg Gregynog’.

The collection is now available for research at the University Library and reveals the friendships and professional connections that Crutchley maintained with printers, typographers and designers throughout his working life and into his retirement. Examples of this are items sent to him by Will and Sebastian Carter at the Rampant Lions Press, John and Rosalind Randle at the Whittington Press, Eric Gee and colleagues at Gwasg Gregynog, and Vivian and Anne Ridler at the Perpetua Press (Ridler being Crutchley’s counterpart at Oxford University Press and his wife a published poet). Many other presses are also represented. 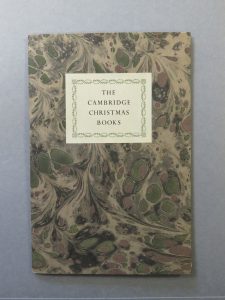 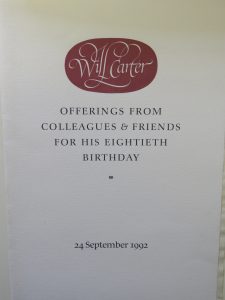 Two items designed and printed by Sebastian Carter at the Rampant Lions Press that demonstrate this close connection are Crutchley’s own monograph on the Cambridge Christmas Books (Ref: MS Add.9824/E/2/1/20) commissioned by the book collector and dealer Tony Appleton, and Will Carter’s eightieth birthday celebrations (Ref: MS Add.9824/E/5/1/2). Crutchley composed a birthday ode for Carter which is also included.

Besides its major publications of limited edition books, the Rampant Lions Press was also known for ‘jobbing printing’, undertaking orders for stationery such as invitations, letterheading and business cards. No order was considered too lowly, although every item leaving the press was beautifully designed. ‘Portfolio 1’ – a red paper A4 portfolio containing twenty-eight items by Will Carter, printed between 1959 and 1967 exemplifies the wide range of commissions undertaken by the press (Ref: MS Add.9824/E/5/2/1). 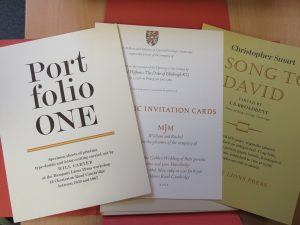 Dinner invitations from the Double Crown Club, of which Crutchley was a long-serving member, and one-time president, form a particularly interesting sub-series. Founded for the purposes of exchanging ideas on good printing, the club holds between four and six meetings annually in which notable people in the world of printing and bibliography are invited to speak on an aspect of contemporary or historical typography, book design, book collecting and so on. Invitations and accompanying literature in this series were printed by club members who used it as an opportunity to display fine design and printing, and the collection holds 91 invitations for dinners spanning the years 1948 to 2000. 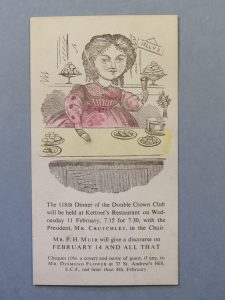 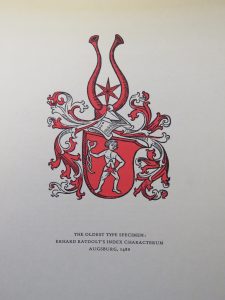 Christmas and New Year cards were another opportunity for printers to exchange family greetings and share each other’s work, and there are many in the collection. A particularly individual one is a brass rubbing from Isleham Church in Cambridgeshire with printed text from Adrian and Joyce Wilson, printers and writers from Tuscany Alley, San Francisco. 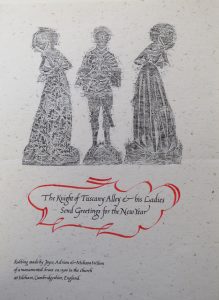 A catalogue hand-list of the collection is available from the Department of Archives and Modern Manuscripts.