Granted by Henry VIII in 1534, the Letters Patent (UA Luard 162) gave the University of Cambridge the right to appoint three printers who could print ‘all manner of books’. It is considered the founding document for Cambridge University Press, setting out its role and responsibilities within the University, and was selected for treatment as part of the ongoing conservation of the Press Archive. 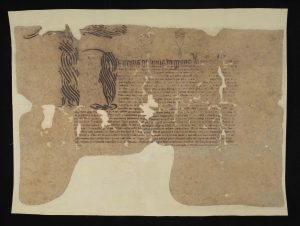 The Letters Patent following conservation in the 1970s

Upon receiving an item for conservation the first task is to assess its composition and condition, which is used to guide the treatment process.  As an official royal document, the Letters Patent was made from parchment rather than paper, which is created from animal skin that is processed to remove the hair before being stretched and dried under tension. It is very sensitive to moisture and reacts quickly to changes in humidity levels that over time can cause the parchment to contract and distort.

The Letters Patent had become damaged over the years and the parchment and ink were in a poor condition with many areas of faded text. It was repaired in the 1970s using traditional techniques at the time, which added layers of cloth, gauze and paper with adhesive to the original document. This has resulted in large undulations across the document as the parchment has distorted and the different tensions of the materials used fight against each other.

The different layers of historic repairs

After evaluating the treatment options available, it was decided that the risk of any further loss of information from the removal of the historic repairs was too high. The method chosen was to mount and frame the document, which would offer protection from any physical or environmental damage that may occur during storage, use and display.  In particular, this would gently hold the document to prevent further stress from the different tensions, as well as provide a buffer to any fluctuations in humidity that may exacerbate the damage. As physical access to the document would be restricted to some extent, images were taken for researchers to use alongside the framed item.

Tabs used to secure the item within the mount

To mount the document a display window was cut from archival board and joined to a backboard to form a framing mat. The item was secured within this by small rectangular tabs adhered to the reverse of the document and to the backboard, made with high quality paper from Japan that is lightweight but strong.

The frame was made from aluminium, as wood can off-gas harmful acidic vapours, and was designed to enable the document to be easily removed if required. Rather than glass, a museum grade acrylic glazing was used which provides protection from UV and is shatterproof to prevent damage to the item. An absorbent charcoal cloth was also included in the framing package to trap any vapours given off by degradation over time. 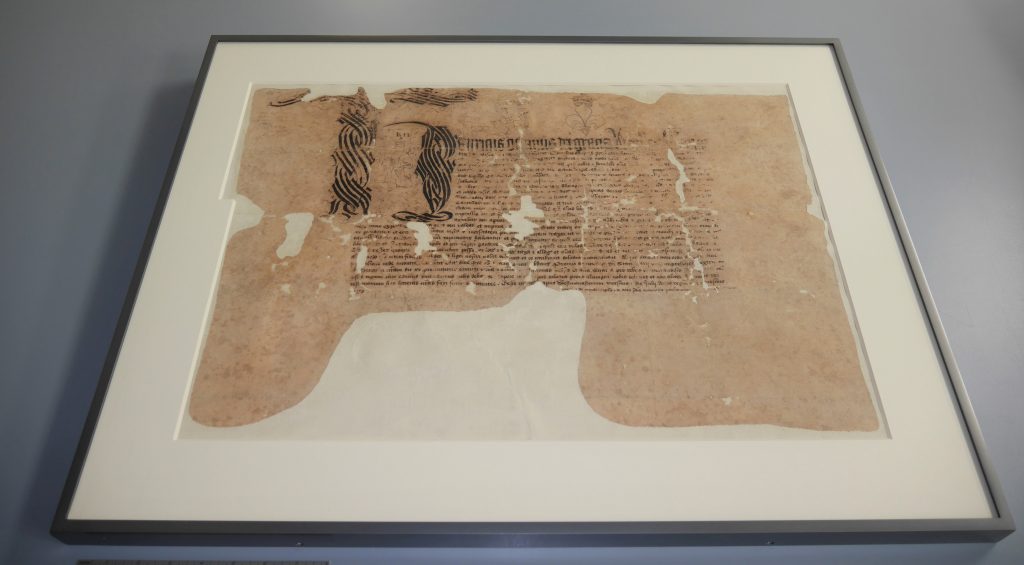 Now framed, the document is protected from future damage whilst ensuring its continued use and display as necessary. In line with conservation principles, any part of this treatment could be reversed should the need arise, and the process has been fully documented for future reference.