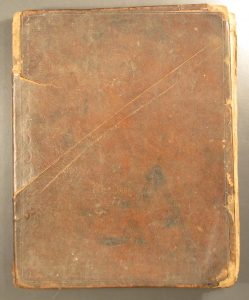 The Library’s exhibition “Tall Tales: Secrets of the Tower” highlights some of the books in our holdings that you might not necessarily expect to find in a learned collection. A recent acquisition by the Rare Books and Early Manuscripts Department furnishes another example: a practical book of navigation for the eighteenth-century mariner which bears marks showing how it was used by its earliest owners. Such workaday books would rarely have found their way into the University Library, even after the Copyright Act of 1715, and if they had might well have been disposed of by early librarians. Partly as a result, they are now hard to find; no other copy of this edition is recorded. 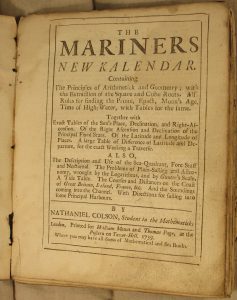 Title page of the Kalendar

The Mariner’s New Kalendar, by Nathaniel Colson, was first published in 1676. It forms a complete handbook for the navigator, starting with “The Principles of Arithmetic briefly and plainly demonstrated”, and including tide-tables, an astronomical calendar, instructions in the use of various navigational instruments, “A Large and very Useful Table of Difference of Latitude and Departure”, and “A Table of the Soundings coming into the [English] Channel”. It was a standard work for more than a century. 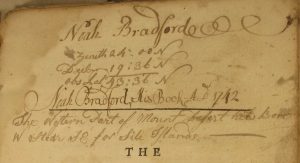 Half title, with inscription and calculations by Bradford

The future Astronomer Royal, Nevil Maskelyne, refers to it in his notes made on the return journey from Barbados in 1764, held as part of the papers of the Royal Greenwich Observatory. The English Short Title Catalogue lists sixty-six editions, published between 1676 and 1785, to which can now be added this one of 1739. Nothing is known of its author, who published nothing else, and who describes himself on the title page as “Student in the Mathematicks”. The Dictionary of National Biography speculates that he may have been a relation of the better-known mathematician John Colson (1680-1759), Lucasian professor at Cambridge from 1739 who served on the Board of Longitude, or, more tenuously, of Lancelot Coelson (1627-1687?), an astrologer and publisher of almanacs, but there is no evidence in either case. 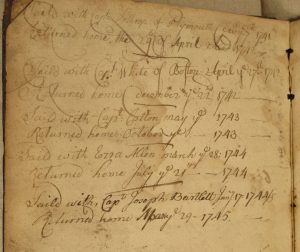 Our copy is in a plain blind-tooled binding doubtless contemporary with its publication, and bears inscriptions by two former owners. Noah Bradford, whose inscriptions are dated between 1741 and 1745, and Nathanael Fuller, who inscribed it in 1753. Bradford at least appears to have been a resident of New England, and he has added to the interest of the volume with lists of voyages made under different captains, and observations and measurements taken at various points. 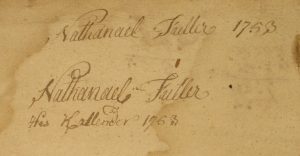 Places mentioned include Plymouth, Boston, “Garmons Bank” (unidentified) and “Mount Desert [Island, Maine]”. The book’s status as a working copy is further attested by rough calculations made on the end papers, and in the margins of the “table of difference”. How often it crossed the Atlantic in its working life is uncertain, but some of Bradford’s voyages lasted several months. The portions of the book relating specifically to English coasts are, however, relatively untouched.
0
Astronomy, Rare Books, Recent acquisitions