Posted on 12 April 2018 by Sabrina Meneghini 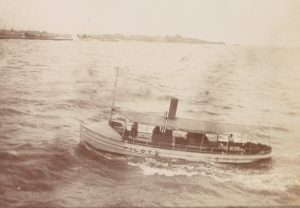 In October 1907 the British artist Alfred Hugh Fisher started his journey around the British empire on behalf of the Colonial Office Visual Instruction Committee (COVIC). He was hired to take photographs and make paintings in order to create a visual record of the people, landscapes and geography of the vast empire. From these images COVIC produced a series of illustrated lectures and textbooks which were to be presented as geography lessons to schoolchildren.

Cambridge University Library holds the six textbooks which were published between August 1910 and May 1914; they are a precious educational survey from the beginning of the 20th century and also splendid objects elegantly designed. The first four follow Fisher’s journey with texts based on his travel diaries, photographs and paintings. 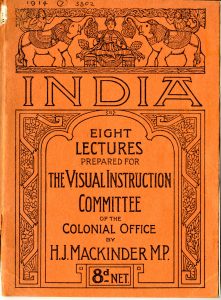 India Eight Lectures prepared for the Visual Instruction Committee of the Colonial Office by H.J. Mackinder published in August 1910.

The front cover of the book is gracefully composed to give the reader a glimpse of the inside. The main title India, positioned in the upper part, divides the two patterns. At the top is a representation of an Indian goddess (although the facial features and dress are not typically Indian) who is being venerated by a couple of elephants situated at her sides. Two mermaids frame the corners, their tails end with floral motifs which continue at the top forming an embroidered line. Under the title, great importance is given to the trefoil arch decorated with flowers and plants. Within it, the subtitle and the name of the author occupy the entire space. This splendid gateway, which invites the reader to open and explore the book, is represented on all the volumes whilst the frame at the top changes accordingly to the countries described within.

The British geographer and politician Halford J. Mackinder is the author of the text on India; he was appointed for the supervision of the whole project, including the preparation of the textbooks. In 1910 he entered Parliament and consequently had less time to commit to COVIC, therefore the succeeding textbooks were authored by the economist Arthur John Sargent. 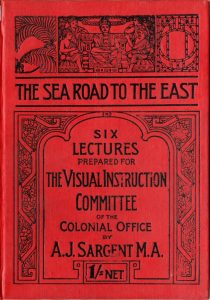 The Sea Road to the East six lectures prepared for the Visual Instruction Committee of the Colonial Office by A.J. Sargent published in March 1912.

The two illustrations at the sides of the largest drawing reproduce bamboo plants. On the left is depicted a couple of branches decorated with leaves and on the right a construction made with bamboo stalks. These evergreen plants are native to warm climates and they grow in South Asia where they are used for various purposes, including building construction, textiles, and in culinary preparations. As the title of this textbook suggests, the author takes the reader on a voyage around the British possessions in the East. Departing from Gibraltar, the chapters then describe Malta, Cyprus, the Suez Canal, Aden, Ceylon, the Malay region, Hong Kong, Shanghai, and Weihaiwei. The drawing at the centre suggests an attempt to represent the different populations of these countries. The two figures on the left, wearing a tunic, have ancient Greek appearance. Their gaze is directed towards the main character who is seated on a throne with the right hand raised and facing outwards, a typical hand gestures of Buddha. In its depiction, it seems as the artist has been inspired by a combination of Asian traditional costumes and features. On the right side the other two figures are looking towards the centre, one is wearing a turban, the Asian headdress, and the other has their back turned. 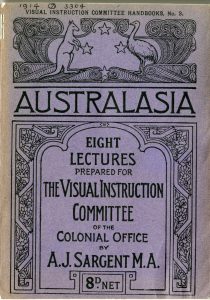 Australasia eight lectures prepared for the Visual Instruction Committee of the Colonial Office by A.J. Sargent 1913.

Although the light blue colour of the cover has faded a bit, the illustrations are still very well defined. The geometrical pattern frame two native animals from Australia: a kangaroo and an emu which face each other. The four stars in the centre refer to the Southern Cross, the constellation visible in the southern hemisphere, which is represented on various sub-national flags. 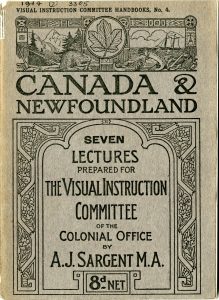 Canada and Newfoundland seven lectures prepared for the Visual Instruction Committee of the Colonial Office by A.J. Sargent May 1913.

Two different wampum belts frame the illustrations representing the North-America dominions. On the left is depicted the inland aspect of the country. In the background high mountains and trees are visible and, in the foreground, there are a beaver, a rifle, an axe and an adze. All these elements refer to the fur and the timber industries, natural products of Canada. A maple leaf is placed at the centre and divides the two pictures. The sea scenery, showing an anchor, a vessel, and a couple of fish, represent the fish trade. These drawings, by illustrating both the coastal and the inland commerce of the country, show the vastness and heterogeneity of Canada.

Fisher toured the empire for three years and stopped by most of the British colonies and dominions. On his first journey, from October 1907 to June 1908, he visited Ceylon, India, Burma, Aden, Somaliland and Cyprus.

In his second tour, from July 1908 to the end of May 1909, he went to Canada, Newfoundland, Weihaiwei, Hong Kong, Borneo, Singapore, going back through Canada in order to document both winter and summer seasons.

In his last year, from October 1909 to August 1910, he travelled to Gibraltar, Malta, Australia, New Zealand, and Fiji.

Although at that time the British hegemony covered almost one quarter of the world’s land mass, including many countries in Africa and West Indies, Fisher only stopped in Somaliland in the African continent and did not visit the Caribbean basin. The images used in the last two textbooks were therefore purchased on behalf of COVIC. 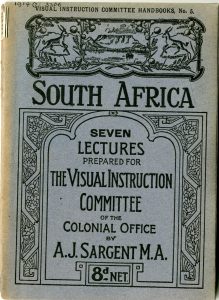 South Africa seven lectures prepared for the Visual Instruction Committee of the Colonial Office by A.J. Sargent published in November 1913 contains illustrations supplied by different organizations, including the Government of the Union of South Africa and the British South Africa Company.

The elegant frame contains two agile antelopes enclosed in cotton plants and at the centre it is easy to recognize Table Mountain in Cape Town by its flat top. 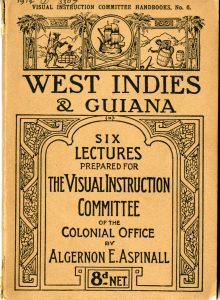 The last textbook to be released in May 1914 is West Indies and Guiana six lectures prepared for the Visual Instruction Committee of the Colonial Office by Algernon E. Aspinall. The author, Aspinall, was the Secretary to the West India Committee and the photographs were obtained from different sources, including the Governments of the various Colonies.

The three illustrations are divided by tall palms and geometrical motifs; the caravel in the centre reminds us that West Indies were first discovered by Christopher Columbus. Both the sketches on the sides refer to the typical products of the countries: on the left two labourers are bundling sugar cane and on the right a man is building a rum barrel.

The texts inside each of the books are rich in historical and geographical descriptions. The front covers, with the illustrations and the titles showing either the natural products, the animals or the distinctive landscapes of the countries, provide information of the inside arousing readers’ curiosity.

The textbooks were accompanied by sets of lantern slides (no less than 350 per book) and the complete lists can be found at the end of each book. The Royal Commonwealth Society Library does not possess any of the slides but we do hope they will surface and if your school or archive has a set of them, please get in touch with us (rcs@lib.cam.ac.uk). We can send you lists of the slides.