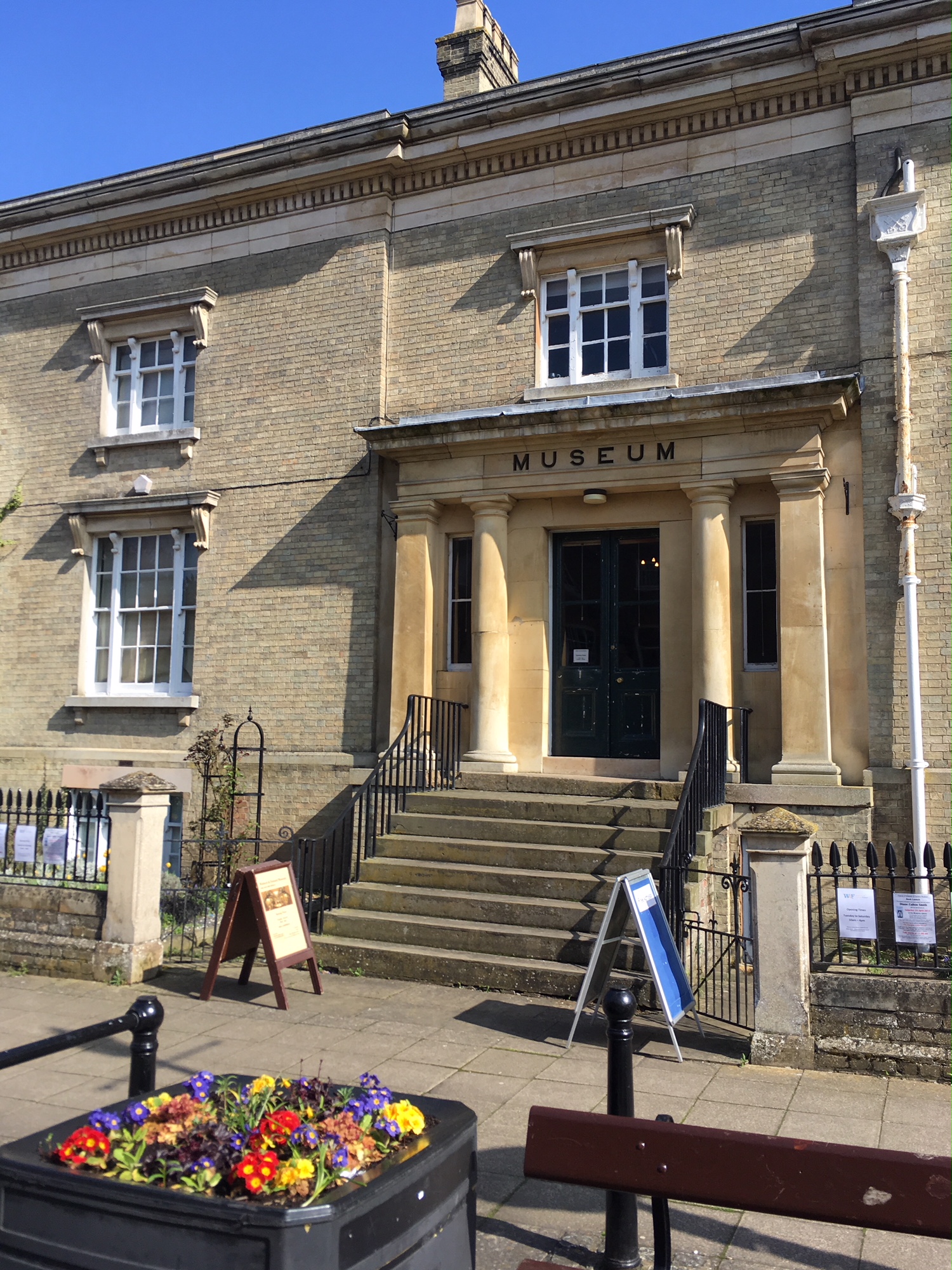 It was a lovely spring day for the Friends of Cambridge University Library’s visit to the Wisbech & Fenland Museum on 14 April to explore its wonderful library.

And there was much to wonder at—beautiful medieval manuscripts, autograph letters from Keats, Mary Queen of Scots and Elizabeth I, an outstanding copy of Piranesi’s view of Rome. The star item of the collection was also on show—the manuscript of Great expectations, given to the Museum 150 years ago by Dickens’s friend, the inveterate collector, poet, mesmerist and self-confessed hypochondriac Chauncy Hare Townshend (1798–1868).

The visit marks a new partnership between Cambridge University Library and the Museum, who are working together to shine a light on the collections and develop projects of mutual interest.  A similar partnership is underway with the University of Cambridge Museums, who have also been Wowed by Wisbech. 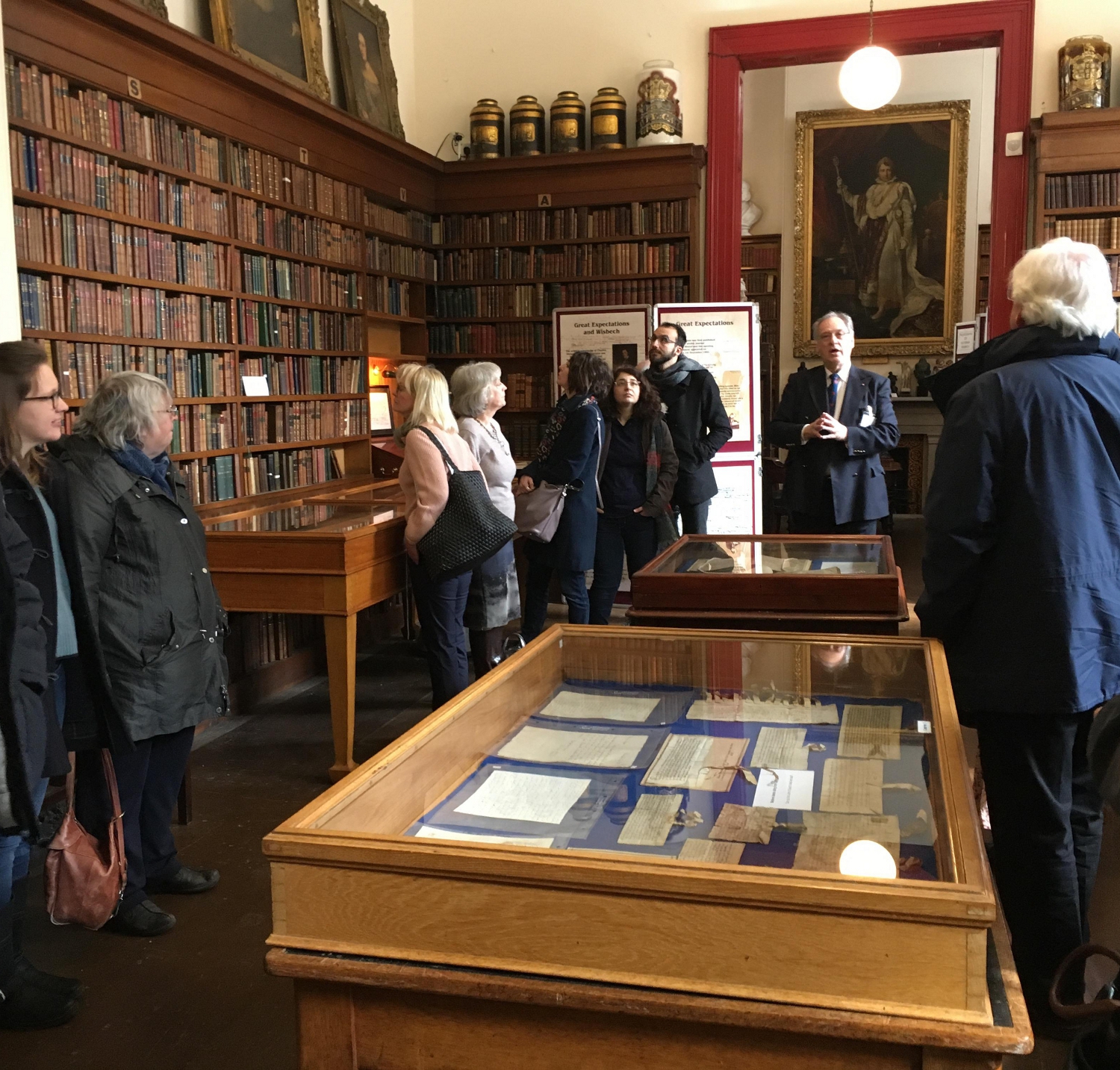 A jewel of the Fens, the Wisbech & Fenland Museum was founded in 1835 and is a cornucopia of eclectic objects, with Egyptian antiquities, ethnographic and archaeological collections alongside coins, fossils and fine and decorative arts, all still displayed in the original Victorian galleries. It is also home to important local history collections and documents and objects connected with the anti-slavery campaigner Thomas Clarkson.

However, the Museum also contains an outstanding collection of rare books, manuscripts, maps, playbills, photographs and archives, many of which can still be browsed in its magnificent 19th-century library room, and these were the focus of the Friends’ visit.

There are two main libraries in the collection:

The Wisbech Town Library, founded ca 1653 and originally housed in the room over the South porch of the St Peter & St Paul Parish Church. It contains some 1,200 rare books on subjects such as theology, arithmetic, astronomy, geography, history and medicine, including an interesting collection of early medical works given by Henry Peirson (d. 1664), who was born in Wisbech and briefly lived in Wisbech Castle, leased from the Bishop of Ely. The library was placed on deposit at the Museum in the early 1880s by Wisbech Town Council. Many of the books have interesting histories and former owners in common with rare books at Cambridge, such as Beaupré Bell (1704–1741), whose coins, medals and manuscripts are now at Trinity College. The connections between this library and Cambridge collections deserve further investigation and would shed much light on the circulation of books in Cambridgeshire in the early modern period. 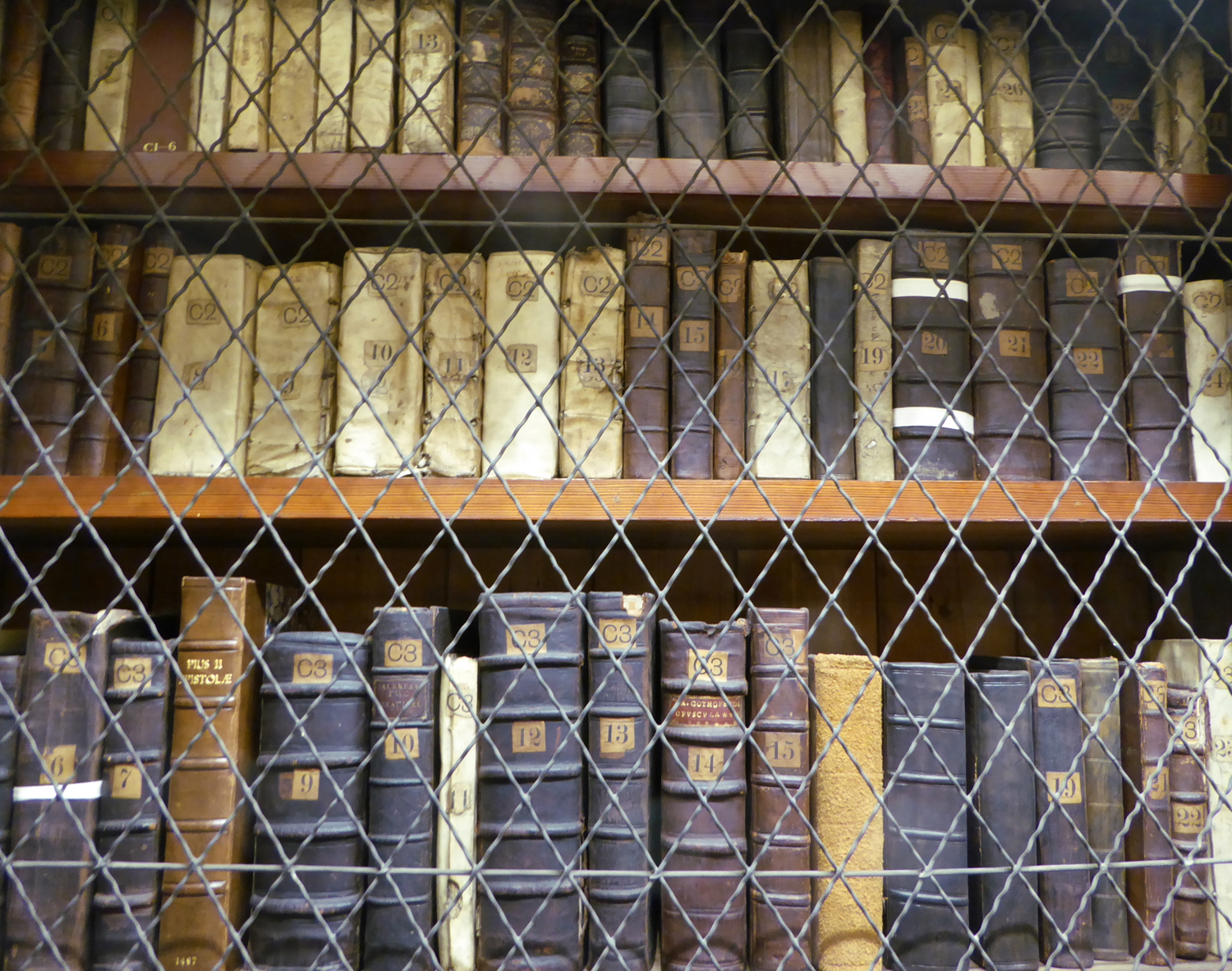 The Wisbech & Fenland Museum Library, itself made up of two distinct collections. The first is the library of the Wisbech Literary Society, established in 1781 and revealing the changing tastes of generations of readers in the town. The second consists of the books and autograph manuscripts of Chauncy Hare Townshend, bequeathed to the Museum in 1868, along with his collection of fossils, fine and decorative arts, Egyptian antiquities, coins and other objects.

Townshend’s books were merged with those of the Literary Society in the Library room, and there are many fine copies reflecting his circle of literary friends—from the Romantic poets to Victorian novelists such as Dickens and Wilkie Collins. Browsing the shelves gives a fascinating insight into a 19th-century library, where novels by still famous authors sit alongside now lesser known works such as The authoress (1822) or Prudence & principle.

Townshend’s mesmerist activities are also well represented, with titles as intriguing as Mesmerism in its relation to health and disease, as well as his own books on the subject. Also on display for us was Dickens’s letter to Townshend complaining, ‘I am horribly hard at work … and dare not be mesmerised, lest it should damage me at all. Even a day’s headache would be a serious thing just now.’

After and entertaining and engaging introduction to the Museum and its library collections by Martin Lawrence, Trustee, and Robert Bell, Acting Curator, we were free to explore the extraordinary special display of treasures in the Library room, which also included stunning early photographs of Wisbech and the River Nene. This was followed by a behind-the-scenes visit to the Town Library, kept together as a collection in the Museum stores.

Items on display for the Friends’ visit, including an illuminated medieval manuscript, a letter from Keats, and Piranesi’s views of Rome

The University Library–Wisbech partnership is already well underway. Last October, the Library hosted a hugely popular joint event for the University’s Festival Ideas on ‘Maps of the Fens: versions of the truth’, a unique opportunity to see antiquarian hand-drawn and printed maps of the Fens from both collections.

2018 marks the 150th anniversary of Chauncy Hare Townshend’s bequest to the Museum, and we’re already drawing up plans together to mark this with another Festival of Ideas event in the autumn—in collaboration with the V&A, who also hold collections given by Townshend.

And there’s much more we’d like to do to uncover the fascinating links between the Museum’s holdings and those of the University Library—two fine collections spanning the county from north to south.

It was a wonderful morning. If you haven’t been to Wisbech before, go and visit! The Museum is open Tuesday–Saturday, 10:00–16:00, with the library collections open to researchers by appointment. The library room and manuscript of Great Expections are generally viewable to the public on the first Saturday of every month. 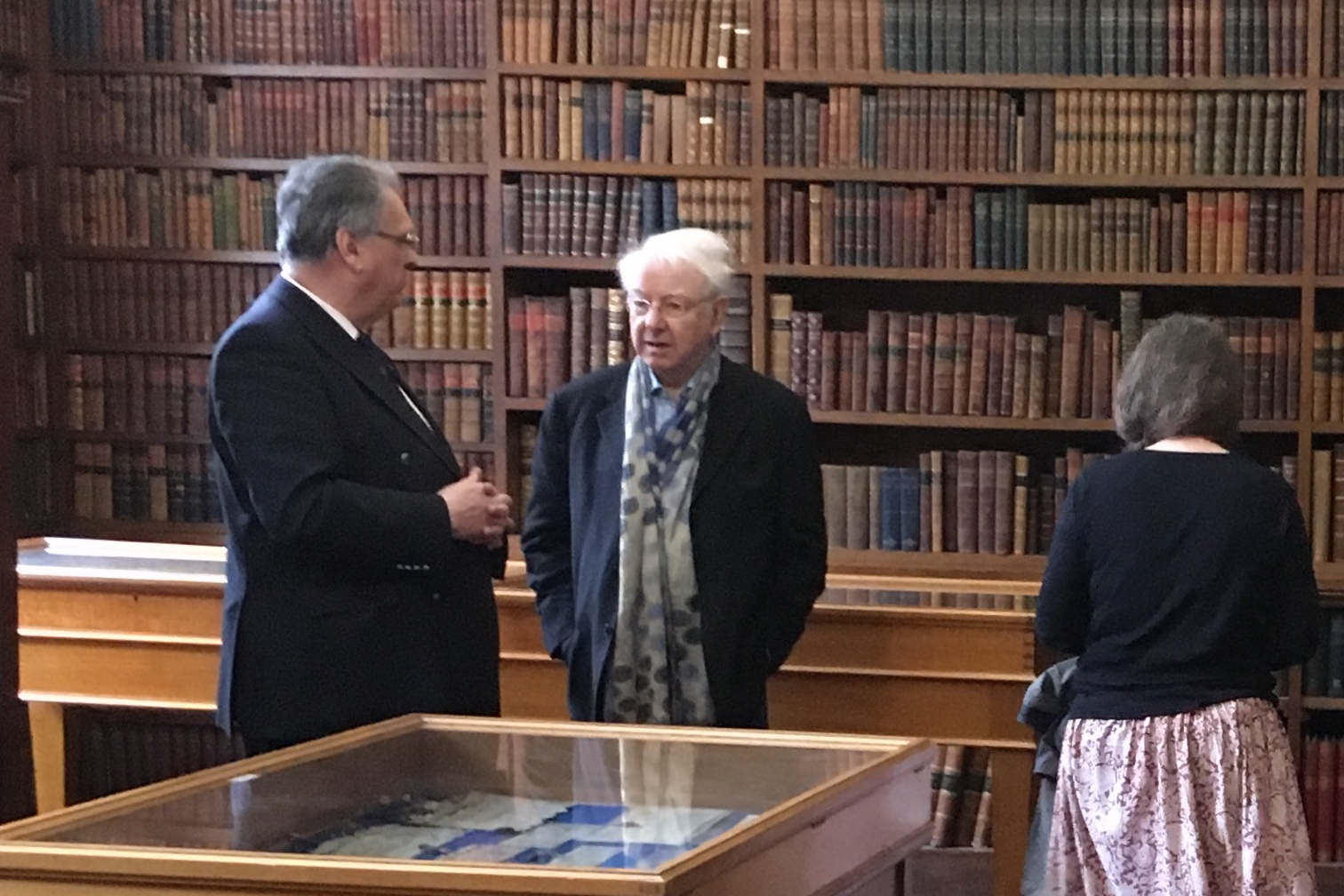 Martin Lawrence, Trustee of the Wisbech & Fenland Museum, in conversation with Dr Gordon Johnson, President of the Friends of Cambridge University Library

The most recent catalogue is: R. Banger, Catalogue of the town library, Wisbech, and of the Wisbech & Fenland Museum Library. 1984. 15 microfiches. [Cambridge University Library classmark: Microfiche.1314–]