Award for the UL’s Honorary Keeper of Japanese Books

Posted on 1 May 2018 by Special Collections 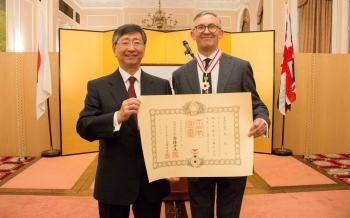 In March, the Japanese embassy in London held a reception for Professor Emeritus Peter Kornicki, who has received one of Japan’s highest honours: the Order of the Rising Sun, Gold Rays with Neck Ribbon. Professor Kornicki began teaching at the University of Cambridge in 1985. He served as Professor of Japanese Studies in the Faculty of Asian and Middle Eastern Studies and as Deputy Warden of Robinson College. Cambridge University Library is proud to have had him as Honorary Keeper of Japanese Books since 1988 and as our Sandars Reader in 2007-2008. There were several librarians from Cambridge and elsewhere in the UK at the reception, and Professor Kornicki was kind enough to recognise the work of libraries and librarians in his remarks.

Professor Kornicki was honoured for his work in surveying Japanese books in Europe and for his academic research and writing on the history of books and literacy in Japan. Among his accomplishments is a digital Union Catalogue of Early Japanese Books in Europe, which grew out of his work with scholar Nozomu Hayashi on Early Books in Cambridge University Library: A Catalogue of the Aston, Satow, and von Siebold Collections. You can find the catalogue in the East Asian Reading Room at FD.22.28 or in the Department of Rare Books at Cam.b.992.11. On a similar topic, there is also The Book in Japan: a Cultural History from the Beginnings to the Nineteenth Century, which includes photographs of rare books at the UL. That is in the East Asian Reading Room at FD.28.27 or on West Four at 849.c.92.433. More recently, he edited The History of the Book in East Asia together with Cynthia Brokaw (C201.b.4298 and non-print legal deposit) and published Languages, Scripts, and Chinese texts in East Asia in 2018.

It was wonderful to see a spotlight put on the work of uncovering and cataloguing Japanese rare books and making them better known. I’ve benefitted from Professor Kornicki’s research first as a scholar and now as the librarian responsible for the books he catalogued at Cambridge. Having the catalogues and database are a great aid to research, and we look forward to seeing the new publications as well.