Libraries are used to presenting the digitised pages of their books online, as in the Cambridge Digital Library (CUDL), but there’s much more that can be done to explain and contextualise the digital images, to allow users to engage more deeply or more interactively with the texts or the books as objects. Glossed manuscripts are a particularly good use case. They are often visually and textually complex with multiple layers of text on a single page, some of which was planned and executed when the book was produced and some added by later readers and users. Hackathon participants were set the challenge of working collaboratively and creatively using their scholarly and digital skills to develop prototypes of potential web applications.

The week was intense – the participants met each other and their potential manuscripts on Monday afternoon and had to prepare pitches, select the most promising ideas and form groups on Tuesday morning. The groups then had the rest of Tuesday and Wednesday to develop prototypes which were put in front of testers for feedback on Thursday morning. There was time for quick tweaks to incorporate feedback before the final demos were presented to a distinguished audience on Friday morning. 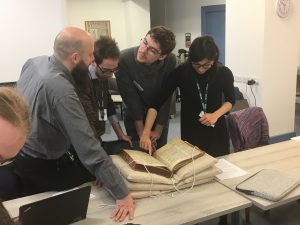 All the participants were graduates of the Erasmus+-funded Digital Editing of Medieval Manuscripts programme, and brought their varied skills in scholarship, digital humanities and web development. This prior experience working together really helped the groups to coalesce quickly and collaborate effectively and harmoniously. The participants also benefited from the experience of the hackathon facilitators, historian Dr Eyal Poleg (QMUL), manuscripts specialists Dr Suzanne Paul and Dr James Freeman (CUL) and developers Dr Chris Sparks (QMUL) and Dr Mary Chester-Kadwell (CUL). The hackathon was supported by QMUL’s Collaborative Fund. 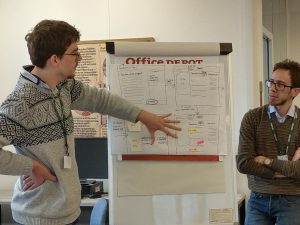 To assist in the design process, the participants selected specific user personas and were encouraged to storyboard user journeys to help guide the development of their applications; one group aimed to produce a resource that a busy lecturer could recommend to her undergraduate students, another group designed their web app for a traditional scholar, while the third was designed for a ‘leisure learner’. 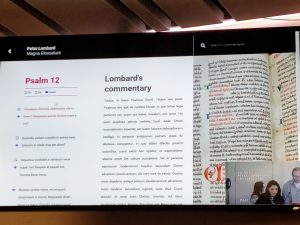 After a great deal of hard work, all three apps were ready to present and were received very positively by the audience of librarians, developers and historians. The hackathon proved to be an extremely rich and enjoyable learning experience for participants and facilitators alike. We’re considering a number of ways in which we all might build on the experience.

In the meantime, the twitter thread gives a flavour of the hackathon, two of the prototypes by the Lukes and the Lombards are publicly available and, best of all, Mary produced this video which summed up the week beautifully – codices, coding and cake.